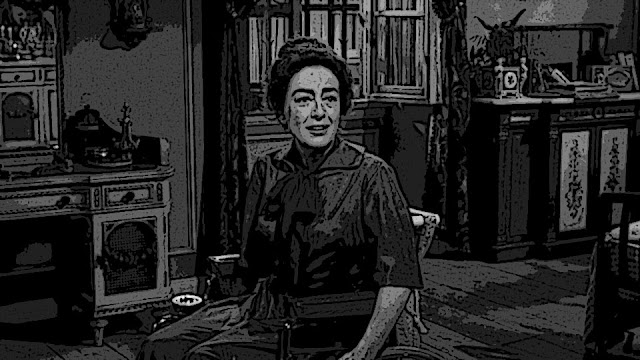 “Mr. Farrell's press agent, Mitch Douglas,
said Davis and Crawford had been enticed
into the movie by the book and the chance
to co-star. He said each actress used exactly
the same words about the other: ''I'll wipe
the floor with her.''—Douglas Martin,
NYTimes April 4, 2006

So much for aging gracefully, my dears.

Bette Davis and Joan Crawford were both aging Hollywood divas who hadn’t ever appeared together.

Both Bette Davis and Joan Crawford—they’d been trying to revive their flagging movie star careers.

One way would be to star in a brand new film genre based on Grand Guignol novels which is what Henry Farrell did with his “Whatever Happened to Baby Jane?"

In 1960 Baby Jane was adapted to film two years later and subsequently started the whole craze. What followed was "Hush...Hush, Sweet Charlotte” (1964). Both films were directed by Robert Aldrich and starred Bette Davis.

Davis played a woman who had been a world-famous child actress but who had lost her popularity as she grew up, until all she had left were photographs and glorious memories. Crawford played her sister, a former movie star who had suffered an accident that put her in a wheelchair at the peak of her career.

Miss Davis's character becomes her sister's vengeance-seeking custodian. She feeds her sister a dead pet canary and a scalded rat for "din-din."

In this second film, Davis plays Charlotte, a haunted, desperate and demented recluse. Olivia de Havilland is Miriam, her cousin who comes from Europe to help her but who really wants her to pack up and vacate so she can sell the house. Mad and murderous things ensue.

The second movie received seven Academy Award nominations, and helped establish a new genre of psychological horror films revolving around murder, guilt, family and the apparent ghosts of the dead. It and its predecessor also set the standard for what became known as the Grand Guignol style of horror movies starring legendary female film stars.

Charles Henry Myers was born on Sept. 27, 1920, somewhere in California. Ms. Bishop did not know where, or when or why he began using a pseudonym.

Mr. Farrell also wrote screenplays for "What's the Matter With Helen?" (1971) and the television movie of "How Awful About Allan" (1970), among other films. In 2002, a musical of "What Ever Happened to Baby Jane?," written by Mr. Farrell, was staged in Houston to mixed reviews.

Posted by pugetopolis at 8:45 AM