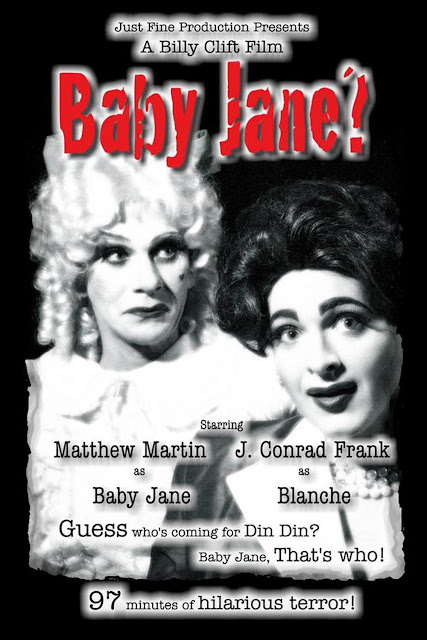 “even as drag queens did
Mildred Pierce into their
mirrors, in the opulent,
pathetic homage of the
loser to the winner, she
was dying in despair.”
—Ethan Mordden, The
Women Who Made
Hollywood

Both Joan Crawford and Bette Davis, during the latter part of their careers were faced with a major problem.

How do two of the most famous actresses of Hollywood deal with becoming—a pair of aging, has-been Divas?

Gloria Swanson did it so very adroitly thanks to Billy Wilder’s Sunset Blvd (1950)—“I am big. It's the pictures that got small!!!”

As Norma Desmond—Gloria Swanson flamboyantly went beyond herself, portraying the changing times of Hollywood with her huge, spooky mansion, her butler & limo and gigolo script writer in the pool.

And finally with her descent down the staircase—pausing and gazing into flashbulbs and cameras as she said her classic last lines “All right, Mr. DeMille, I'm ready for my close-up…”

How did Crawford and Davis do the camp Sunset Blvd routine? What better way then to do a drag act of two former movie stars—and really drag it out nasty, down and dirty all the way, honey.

In a decaying Hollywood mansion, Jane Hudson, a former child star, and her sister Blanche, a movie queen forced into retirement after a crippling accident, live in virtual isolation.

Like Sartre’s No Exit—there’s no escape for these two aging diva movie stars. Rather than get maudlin and dreary-deary about getting old—the two old queens engage in constant drag routines of the gilded good old Hollywood days.

Sometimes the fantasy world of reenacting the past—collides and crashes in tears and recriminations when the mirror reflects perhaps too closely the horrifying Realpolitik of the wretched scene.

Posted by pugetopolis at 7:11 AM