Three Fags on a Train 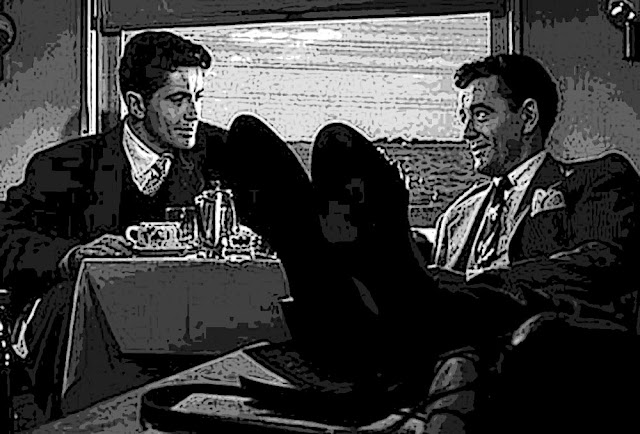 Three Fags on a Train

What is it about fags on a train—that captivates the nefarious noir gay imagination of Alfred Hitchcock? There’s his Shadow of a Doubt (1943) with Joseph Cotton, Strangers on a Train (1951) with Robert Walker and Farley Granger, as well as North by Northwest (1959) with Cary Grant, James Mason and Martin Landau.

Three fags on a train, three gay film noir movies, three train rides into suspense and murder, Miss Cotton swishing into town in Shadow of a Doubt, posing as nice friendly Uncle Charley—only to be slowly revealed as the Merry Widow Murderer who does in wealthy, vain, bored women for a faggy gigolo predatory living.

And then there’s snide, sophisticated, Manhattan smooth businessman Cary Grant—who accidentally gets sucked into a long train ride with the girlfriend of two evil homosexual spies, svelte James Mason and weaselly Martin Landau, ending up getting buzzed by a machine-gun shooting airplane in a dirty Illinois cornfield, then left hanging on the tip of George Washington’s huge phallic nose there on Mt. Rushmore clinging for his life.

What’s a girl to do?—getting all mixed up so romantically and yet dangerously with all that train nostalgic, long-gone now, lovely mode of obsolete transportation—when gay romance could take its leisurely time in club rooms and intimate compartments, back when a fag could be a minor yet romantic preoccupation tres entertaining?

Perhaps one should also add Sudden Fear (1951)—with queen bee Joan Crawford and nefarious snaky Jack Palance in their comfy little cross-country compartment on that train from NYC to SF—playing cards, having drinks, chatting it up and ending up with another murderous rendezvous and homicidal marriage tryst between a sullen killer and the tragic classic fag hag queen bee Diva Crawford…