THE SECRET OF THE SERPENT 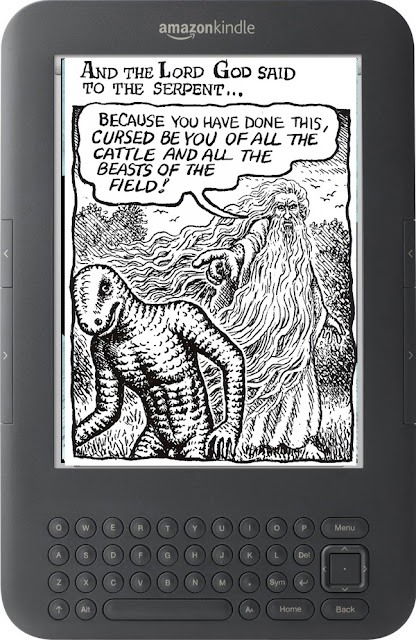 The Secret of the Serpent

God got pissed off at the Serpent for seducing Adam & Eve to taste the Forbidden Fruit in the Garden of Eden.

God punished the Serpent by turning the Serpent into a Snake down there between Adam’s legs. What could be worse than to be a Dick forever!!!

To be covered up and hidden from sight. To snake around down there and lurk forever in dirty shame? To be a victim of Naked Ape urges—forever despised as nothing more than a Dick with Two Legs? 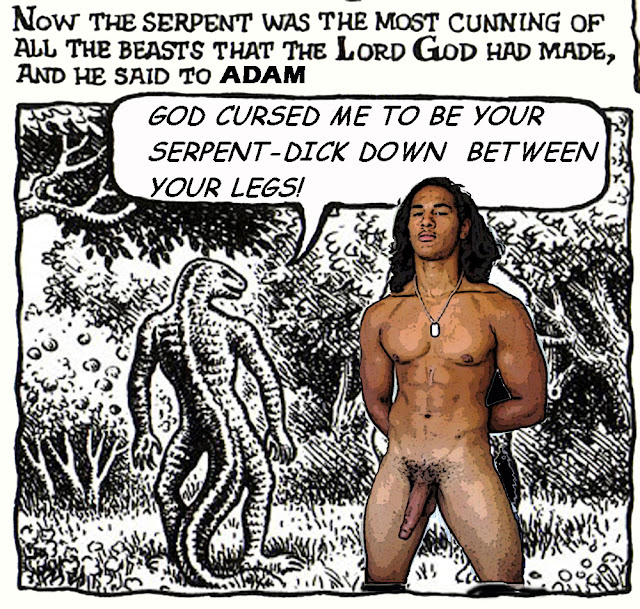 But the Serpent was one of God’s most sneaky and wily creatures. Even though it was enslaved down there between Adam’s two legs—the Serpent tried to take advantage of Adam.

“Even though God said you shall not eat from any tree of the Garden…” the Serpent was saying to Adam one fine day in the Garden of Eden.

Adam stood there dumbfounded. Sensing he’d be cursed for generations and generations—with this Genealogy of Evil Meat moiling down there in his Groaning Groin forever.

“You still don’t get it, do you, Adam? You fool,” the Serpent hissed to his hapless Host.

Adam couldn’t believe the Serpent could talk. Not like another human—but more like telepathic messages beamed from his reptilian medulla at the base of his brain.

“We’re married now, you Fool? For better or worse. You ate the Forbidden Fruit and woke up to the whole game. God queered you good forever and ever—now I’ll haunt and rule you forever,” said the Serpent with a smirk. 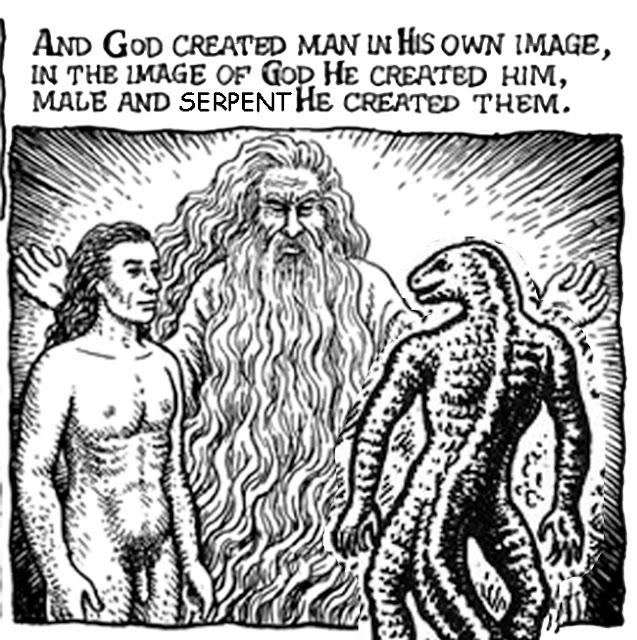 Adam wasn’t that smart. The Serpent-Dick was smarter. And the Serpent seemed to know what he was talking about—a Same Sex Marriage down through all of Time. They were conjoined now—as Man and Dick.

Adam was simply shocked! He stared down there at the writhing Serpent hidden underneath the Maple Leaf. “Surely it can’t be true. Who the fuck would believe anything that a slimy Snake would say anyway?”

“But it’s true Adam,” the Snake hissed. “The Garden of Eden was made for you and me, baby. It’s a Prison Planet for Pricks like me. Just look down here between your legs, Adam—and what do you see?”

Adam stood there naked—looking down at himself. It was a horribly ugly Anaconda—a cruel uncut Cobra coiling and uncoiling down there. He had no control of it—it was a Monster of the Id.

“I’m the big bad Root of the Tree of Good and Evil,” the Serpent hissed. “I’m the Forbidden Fruit itself. Because Earth is a Prison Planet—for Interstellar Pricks and Gangster Galactic Cocks like me. Comprende, kimosabe?”

Adam shuddered and started getting erect for some reason. The Serpent-Dick had a life of its own. He felt self-conscious and embarrassed. All this attention he was getting from this nefarious Serpent creature.

“Yes, my dear Adam,” the Serpent said. God punished you for tasting the Forbidden Fruit—but he punished me even worse by imprisoning me down here between your legs. A Prison Penis Planet of Awful Pain and Exquisite Pleasure—from which there is no Escape.”

Adam was erect all the way now—all twelve inches of him. It was grotesque and huge. It did look like a Serpent—it was a Serpent!!! All of a sudden the Fall made sense—like Nuts falling from an Oak Tree. Adam felt himself losing it—the Serpent was beginning to shoot Adam’s runny Brains out.

“My gawd,” Adam said God. “To be the Snake with Two Legs—to be haunted the rest of my life with this Serpent down here between my legs. Stuck on this forlorn Forbidden Planet of Naked Apes—ruled and dominated by Alien Dicks!!! I’m fucked doomed for sure—doomed to be nothing but a Dick Head!!!”

“Now you’re getting the Big Picture, dummy,” the Serpent said.

Adam could feel it—all the way down to his toes. All the way from his Reptilian Brain nestled under his monkey cerebrum. Down to his alien retro genetically engineered Dick—slithering down there in the primitive Jurassic Schlong Pubed Jungles of Hell!!!

Adam felt weak in the knees—covered with sweat. He felt a wave of sickening Skull Island King Kong jizz—started to ooze like a Snake outta him. There wasn’t anything he could do—falling and sliding around down there on his knees in the weeds and crabgrass of the Cursed Garden of Eden.

The dumb Naked Apes like Adam—they were the unknowing, unsuspecting Prison Guards and Wardens of the Prison Planet. The Prisoners were Alien Rebel Revolt Penises from Mars and Sirius—both coveted and despised by their Monkey-Brained Hosts. Hidden from sight—down there in the darkness. Moiling about—causing oodles of male and female trouble. Oozing generations of it—the cursed Genealogy of the Gods!!!

Prison Planet Earth. That’s where they put the Bad Guyz—the ones that deserved to be Dicks the rest of their Lives. Whether uncut or circumcised—whether small & dinky—or huge and well-endowed. They were all doomed to Dick Heaven and Hell—whether they knew it or not.

“You’re fuckin crazy,” Adam said. “You’ve been watching too many crummy Science Fiction Movies!!! Nobody would ever dream up—a scary Scenario like that. Not even Philip K. Dick or George Orwell!!!”

Adam was 18-years-old—but he was still having wetdreams at night. Even though he fucked Eve like crazy—and fathered a couple of no-good worthless bad boyz. Both Cain and Able were Eve’s favorites—but Adam despised his wiseass chicken offspring.

But this time it was a real Mother-Lode Nocturnal Emission—right there in fuckin broad daylight for anybody to see. It was so strong that Adam fainted—falling down to his knees and then going spastic and unconscious. Shooting his brains out down in the dirt and weeds.

Adam had this incredible acid flashback—going back into time. Back to King Kong and Skull Island—back to Fay Wray screaming her head off. The Alien Prison Masters—had designed the Prison Planet way back then. Back in the horrible humid Jungle Jurassic dayz—of Dinosaurs, Pterodactyls and Mosasaurs.

And then after the Triassic-Jurassic Extinction Event—the Alien Prision Masters downscaled the Prison Planet and minaturized the penal system to make it more streamlined and svelte.

They genetically retro-engineered the the Big Lizards down to Lounge Lizards—but kept the Jurassic jizzy aggressiveness with the enlarged prison medulla oblongata. The medulla oblongata penitentiary is where anger, jealousy and aggression were kept bottled up from the rest of the worlds.

So that the Serpent inmates were designed now as more sleek, streamlined and elegant creatures—stylishly ensconced down there in their Abercrombie & Fitch pokey-dot shorts to house them in their new deceptive Prison disguised in vanity and stupidity. Cheap, efficient—and totally sublimated into continuous never-ending prison genealogy of Dickhood in the Dungeon.

Young Adam was stunned—what a horrible Revelation!!! The Garden of Eden setup. What a conniving Con-Job—a Prison Planet in disguise!!!

Adam looked down at himself—totally and completely horrified and disgusted by it all. Conjoined to a slimy Serpent Thug—a crummy sneaky Convict Cock from Gawd knows where!!!

Adam couldn’t help himself though—he was conjoined and married to this Piece of Bad Biology. Condemned to be a part of this ongoing cursed Homoerotic Nightmare—ruled by this ugly Gangster Anaconda for the rest of his so-called life.

“How could this happen to me?”—Adam cried out to Gawd. “Imprisoning me with this Killer Cobra—this Penultimate Prisoner Nightcrawler Worm?” 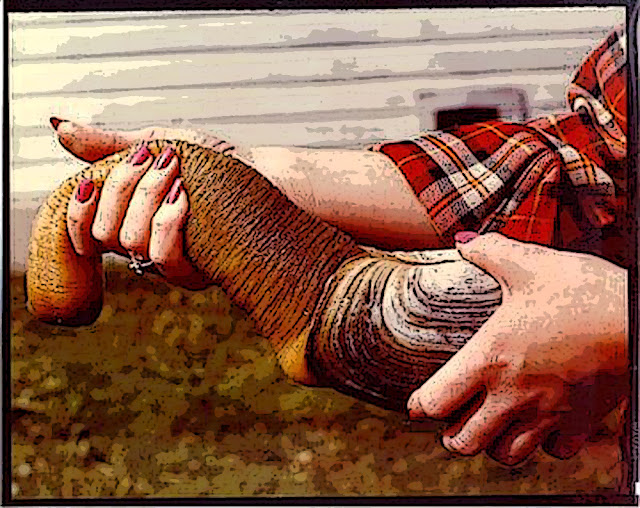 “Don’t be silly,” the Serpent said. “It could’ve been worse. Gawd could’ve fuckin used his DNA genetic expertise to turn me into a gross-looking Geoduck down there between your scrawny legs instead. They’re probably the most ugly clams that God ever created—so incredibly gross and absolutely disgusting!!! I know you’ve seen them there in Seattle—down there at the Pike Place Market?”

Adam nodded—he knew it was the Truth. It could’ve been worse—a lot worse. The Serpent could’ve been turned into huge gross grimy greasy Geoduck—coiled up down there in his crummy cursed Groin.

“Oh Gawd!!!” Adam said—“It could’ve been a lot worse that’s for sure!!! Jaysus christ!!! Eve would never leave me alone—with such a slinky slimy Schlong like that!!!”

Posted by pugetopolis at 2:15 PM