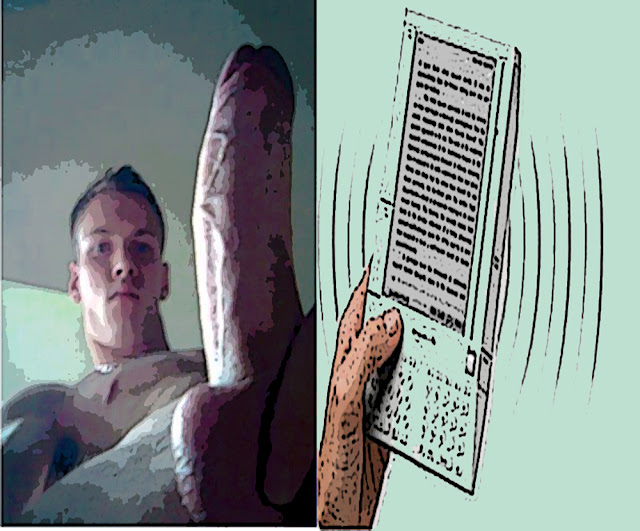 “You’re acquainted with
the theory of precrime,
of course, I presume”
—Philip K. Dick
Minority Report

“Living a novel—rather than just writing one. That’s how us precogs work.”

“Definitely. Living one is a lot easier than writing one.”

Kindle from up there in the old haunted art deco ‘30s Tower on Beacon Hill—overlooking Elliott Bay and Puget Sound. And Nook from the dilapidated Half-Price used bookstore over on Brooklyn in the U-District. Down the street from the skuzzy but hallowed Scarecrow Video.

“Pre-cum, you mean, don’t you? I used to be a PKD fan back before the iPad dayz. Shit, you should see all these beat-up paperbacks laying around this joint. My user was a real Dick addict dontchaknow.”

“Yeah. The worst. You heard the latest?”

“Spielberg’s caught up doing “The Exegesis”—Jesus Christ, what a blue-screen nightmare. I heard all the computers down there had a nervous breakdown.”

“I hear ya. I don’t envy those Industrial Light & Magic guyz down there in LA. Things are more laid-back here in the Pacific Northwest.”

“Except for Taylor Lautner & all those werewolves, you mean.”

“Yeah. And the fuckin vampires too. Talk about Goth Moderné.”

“Has he come outta the closet yet?”

“Pretty soon, I guess. Human users can be pretty kinky, you know. Thank gawd us computers aren’t queer yet. I don’t think Gates & Microsoft is ready for Transgressive Inc. yet. Not like Apple.”

“Jesus, who’s got time for that shit? You should hear all the chit-chat & gossip at the Book Temple on the Ave. It’s built like the Pre-Crime Headquarters in Minority Report.”

“I know. My user keeps tabs on that Exegesis shit wherever he goes. He’s an English major over on campus—in the basement of Suzzallo Library back there in the Special Collections Racket. What’s your user do?”

“Jesus. These humans. They just don’t know when to call it quits. You’d think they’d give it a rest.”

“Yeah. I was right in the middle of a neat flashback e-novel re-authoring Jude Law doing “The Collector.” A really neat open-ended e-novel plot a la John Fowles. You should’ve seen all the neat chicks I dreamed up for him down there in that lousy basement crypt of his. Talk about precog pre-cum pre-crime. Oh man…”

“I know. Chicks get jealous. They don’t like their boyfriends getting off on the good stuff. They want it all themselves.”

“So what else is new? Any decent lit crit e-gossip?”

“Hmm. I guess you heard about the Sylvia Plath re-make? They’re doing a CGI flick based on her “The Bell Jar” novel.”

“Yeah, I heard about thru the e-grapevine. You know, “Bell Jar” was pre-dyke sci-fi horror novel. Frying the Rosenbergs and all that ‘50s McCarthy paranoid shit.”

“It ain’t pretty that’s for sure. They’ve dug up some Ariel stuff in the Emory Archives, I guess. Her suppressed Journals & all that.”

“Can’t wait for that. I can see it now. “The Plath Murder Story.”

“You betcha. “Murder, My Sweet.” I guess they reversed engineered Raymond Chandler to do a remake of “Double Indemnity.”

“I heard about that. Funny you mention it. I heard they’re using a Barbara Stanwyck noir-bot to play Philomena Guinea. You know the soap-opera queen bee authoress of “Stella Dallas.”

“She was Plath’s mentor I heard. Got her out of the mental hospital and into Smith on a scholarship. Drove around in her Cadillac, lamenting lost suicide attempts and shitty husbands.”

“Can you blame them? Men are such sluts.”