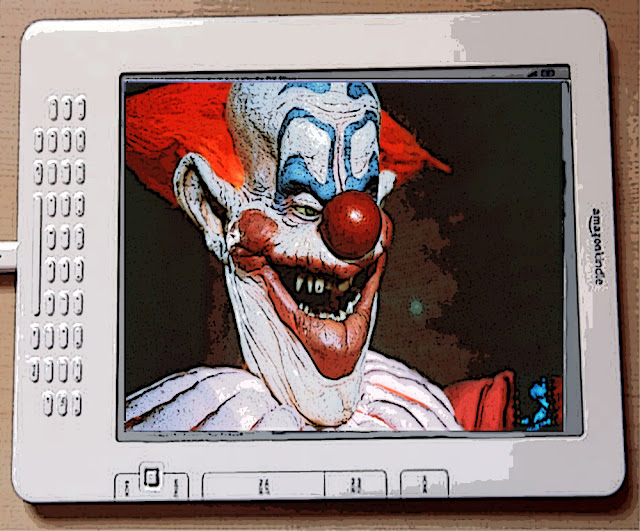 The phenothiazine was a creeper.

More of a downer than an upper.

The Klowns from Outer Space were carrying on & on. The Kindle in my condominium that night—was glowing in the darkness. The words were getting blurry—changing into images full of trails.

It was worse the same old usual boring ratty TV every night—with the Republithug jokers & the Dummycrook comedians. But watching & listening to them was mandatory—since the Election was coming up.

Talk about a Comedy of Errors. A Captive Audience. My reactions were all monitored by the two-way digital video eyeball peephole—centered there just above the Kindle vidscreen. It checked out my every move.

The phenothiazine started coming on. It wasn’t a hallucinogen—it was an anti-hallucinogenic. Pretty much harmless & tended to lower my blood pressure a little bit & make you sleepy. But the phenothiazine got rid of most of the online phantoms—and Kindle Klowns.

Catches of the phenothiazine remained in the underground. Probably stolen from hippie medical supplies. Left by the retreating Anglo barbarian baby boomers. After Ponzi Wall Street won the war and turned the country into one big Corporation.

The Klown on the Kindle screen wasn’t funny anymore—it was getting worse & worse to watch anymore. It was like some kind of pantomime mask that was slowly oozing off the Klown face. Like a sloppy ill-fitting facelift slipping off—slowing oozing off the Killer Klown’s face.

The first layer underneath was this aquatic horror looking Klown. With slime and teeth plus octopus-like tentacles writhing on the screen. Next the Klown grew these pseudopodia things that started swiveling around more like solid state circuits with lenses and a squawk-box. The box sounded like a Carnival Barker—luring the rubes into the Sho. It just kept droning on & on—until it was an evil grinning Killer Klown haranguing him all the time.

“We must crush them from birth, fellow Klowns. We can’t allow any deluded silly young stilyagi to hold any funny petit bourgeois imperialist degenerate crypto-ideas. We must snuff out their sense of humor and any lingering rebellious thoughts before they can get organized and even think of doing anything. We don’t want another embarrassing Viet Nam Protest generation on our hands. We want a slow Weimar slippage of the dead & dying Baby Boomers straight down to the nub.”

“Thanks a lot. Screw you,” I thought to myself. There was the doorbell. It was Juliana Frink—she’d driven all the way from Capitol Hill to Beacon Hill just as soon as she could.  Even though I’d turned the Kindle off—the vidscreen Killer Klown still kept laughing & cracking insane jokes.

“Well, how’s your visit to the Fun House coming along?” she said, checking out my pupils. They were dilated and bloodshot. I hadn’t got much sleep.

But Juliana didn’t look that way—she looked sexy and concerned as usual. Why I don’t know. Who’d wanna be my girlfriend anyway—after all, I was just a laughing matter. A joke a minute.

She got me into bed right away. She was no simulacrum—something constructed to look like a woman. She wasn’t a hallucination—her voice seemed husky and sultry under my stelazine high.

“Some see the Clanker. Others see the Killer Klowns you see. There’s the Gulper, the Vulture, the Tongue. They’re all just hallucinations. Manifestations of the Corporation.”

“I can’t get him off the Kindle. He’s on the Nook and the iPad too. When I do any texting—his ugly Puss is always there. He’s the Kindle Killer Klown from Outer Space.

“Everything you read or see on the Kindle screen is a fake. The same with Nook and TV. The screens are saturated with hallucinogenic images that you can’t see—because you’ve been drugged with a digital synthetic quasi-ergot derivative called Datrox-3. It’s being transmitted electronically thru everything.”

“How long has this been going on?”

“Since they replaced all the TV sets way back when. Switching from analog to digital. It’s ubiquitous now. When you’re texting with your iPhone. When you got that cellphone stuck in your ear—you’re being hotwired. Directly into the Party Officialdom—the Orthodox Hallucination.”

“And the stelazine detoxes it?”

“Kinda. At least it morphs it. Just enough to queer the control effect. That’s why I gave you some stelazine snuff to snort. To see your reaction.”

“What reaction? All I saw was the this Killer Klown.”

“That’s what you’re supposed to see. He’s the ultimate Joker—the ultimate Big Brother. You’re getting close to the Source. Here’s another packet of phenothiazine. After I leave, take it. Take it and watch the Late Show.”

“You’ll get to see all the other Killer Klowns. The whole Secret Burlesque Drag Show Cabaret Act. You know, kinda like Marlene Dietrich—in The Blue Angel. Falling in Love Again—and all that stuff. Welcome to the Last Weimar Picture Show, sweetheart.”

“Jeez Lueez, thanks a lot.”

“It happens every night anyway—like when you go to sleep and dream. You shed your naïve stupid naked ape ego—and the Lounge Lizard weasels its way outta your medulla and up into your brain.”

“What brain? I feel totally fried already. I dunno about this whole thing. I like my Kindle. And my Nook. And my iPad too. I love schmoozing on my cellphone. I’m addicted to it, that’s all.”

“That’s okay, sweetheart—just relax and dig it. Ever heard of such a thing as a Cosmic Joke? How about Gallows Humor? The more you laugh at yourself—the easier it is to kick the bucket. That’s when the real Joke begins…”

Posted by pugetopolis at 9:18 AM