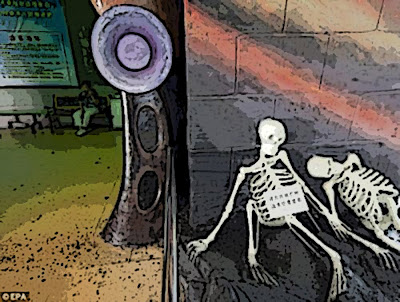 By then it was too late—I couldn’t stop and he couldn’t help himself anymore.

It wasn’t much of a gang. Three or four young toughs—with i-Phones growing outta the side of their heads. They didn’t work anymore, of course, but they couldn’t be unplugged.

That’s the thing with surgical implants—there weren’t any surgeons left to unplug the goddamn things. The same with the 3-D contact lenses—they didn’t work either—but at least you could take them out & throw them away.

After the apocalypse—a lotta things changed. There was a big dumbing-down of just about everything. The ghost malls were like the suburban ghettos now—places where white-trash gangs still hung out.

There was nothing else to do—except just keeping it up. Doing the same things as before. Nothing—just hanging out. But without all the frills & gadgets—those days were gone. The ghost malls were ghettos now—ruled by gangs of hardened youth. All of them with hardons—that wouldn’t quit.

I should know—I used to be manager at the Best Buy store. A lot of them worked for me—things were cool. I felt sorry for them—the e-generation. After the apocalypse—everything digital dumbed down fast.

Especially the ones with cellphone implants—and that sorta shit. The whole culture had shifted over to cellphones—talking, texting, turning into an almost telepathic culture on the make.

That’s how Orwellian things got—skip the vidscreens & Big Brother routine. It was all electronic verbal communication—and talk, talk, talk. It’s hard to say who were the robots—the talkers or the cellphones.

Big Brother had become ambiguous—it was pretty neat that way. Everything went smooth and things just seemed to flow. There wasn’t any future shock—just a slow-mo change back to oral culture again.

Who knows where it would’ve gone—but there was a glitch. All it took was a sunspot burnout—or a high level strat-bomb to strangle the whole thing. Nobody knew what really happened—but by then it was too late to go back to TV or radio or shortwave.

There weren’t any surgeons left either—to remove the cellphone implants—they just kinda dangled outside the head like a dead pseudopod or something. It wasn’t pretty—they’d get infected and drive them crazy.

There’s nothing worse—than a fucking crazy implant gimp. Still addicted to talking all the time—and being cut-off from doing it anymore. Brain-dead babies—suburban i-Phone sluts.

Ah yes—the good old days. But now it was all just one big Ghost Mall. The gangs just hung around the ghost-malls with nothing to do—their cellphones dangling outta the side of their heads.

What can I say—what could anybody say? Those weird days after the Apocalypse—when everything seemed disconnected & no longer wired to reality. The Big Shut Down—they called it. Expecting things to start up again—but they never did.

The whole edgy culture—ended for everybody. Especially writers like me—my iPad went blank. My Kindle kicked the bucket. My Nook fizzled out on me. Geez Lueez—what’s a guy to do?

The leader of the ghost mall gang stole everything I had—and then got me into an Abercrombie & Fitch dressing room off to the side. He had my number. The rest of his gang mulled around outside—while the kid got me down on my knees.

I had to get him off fast—before dark. That’s when the mall rats and ghost zombies came out. They lived underground—like the creeps in “Escape from New York”. After dark—was Hunting Time.

I got him off jiffy-whiz quick—I didn’t waste anytime. I had this Best Buy backup kit—I carried around just in case. I plugged him in—and gave him a buzz of the good-stuff. How he knew I was holding—I have no idea. He was selfish tho—kept me to himself.

My razorblade boots & laser-shiv—got me enough respect to get what I wanted. It was Even-Stephen— when it came to both of us getting what we wanted. He got a buzz—I got to give him a blow job.

He was a young tough—but vulnerable-looking. Your typical suburban ghost mall rat—stinky & dirty like I liked them. I drained him real good—down to his last fuckin sniggly-wiggly smirk.

I gave him an extra-dose—turning up the transducer all the way. He fainted back there in the Abercrombie & Fitch stall—and I left him there to daze awhile. A real live-wire kid—but I had to go. Before him & his gang—could roll me & off me for good.

The drone zoomed in overhead—then landed on the roof of the old Cineplex. I got in, shut the door & we took off. Back to the Gates Bunker over in Medina—over on the East Side of Lake Washington.

Underground is where the WalMart Mob lived now—them and the Costco Crowd. Powered by the Snoqualmie Falls—and the Rainier Volcano Grid. The rest of the West Coast was Fukushima Fried—too hot to live above ground anymore.
Posted by pugetopolis at 1:42 AM