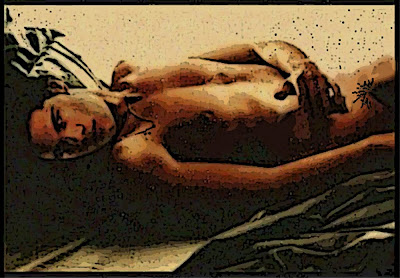 All she could see—was his you know what. It filled her vision & overwhelmed her pouty pussy. He took her hand and, in a symbolic gesture as old as the hills, placed it between his legs. She touched the cool miracle of his skin and she was at home.

Home is where you know what lives—it was her long-awaited wedding day. Everything was fine & dandy—and then he started to change. She brought out the best & worst in him—but mostly the Wolf. Oh My Oh My!!!—Grandmother Dearest!!! What a big fuckin Nose you’ve got!!! Cried out Little Red Riding Hood.

The Cineplex Theater was simply packed with pussy—talk about a Gulag Archipelago of Moaning Groaning GIRLS. I was the only male in the whole joint—and I too was caught up in the New Moon craze. I was swooning in the aisles—just like all the other girls over Taylor Lautner.

It seemed inevitable—we were all facing death at the same time. We were all marked for disaster. There was no escape this time—it was coming back for us all the way. I felt weak in the knees—I had this killer orgasm as Taylor Lautner took off his shirt. The next thing I knew—I was groveling down there on the sticky Pepsi-Cola movie house floor like a dog.

Everybody was staring up at Taylor Lautner—I promised myself not to. I couldn’t help it though—I ogled at him too—every fuckin inch of him. I felt ashamed of myself—but I was bored to death and needed him bad. He caught all of us looking at him—shirtless and smiling up there on the screen. He knew what we wanted—he was playing hard to get.

I oozed down in my seat—I started screamin & creamin like all the rest of them. You can try to runaway from somebody you fear—you can try to fight somebody you hate. But I loved and hated him—I just couldn’t stand it much longer. That’s when he took his pants off—then slipped down his Abercrombie & Fitch dirty Wolfboy shorts.

How can you fight somebody that you really love—how can you runaway from somebody you need all the way? Guys like that are exotic kinds of killers—worse than werewolves, vampires or Jack the Rippers. Slay me, baby—is all I could scream. Murder me, Wolfboy—all the fuckin way!!!