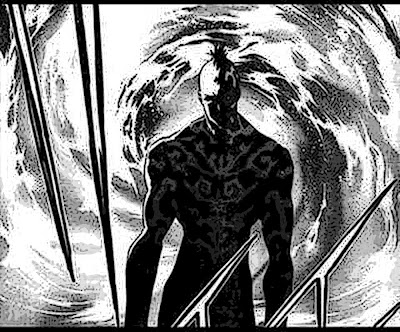 It was like the Lizard Boy was living slo-mo from scene to scene—in some old skanky '50s Godzilla horror movie. It was like he was playing a role in some kind of strange Kabukichō (歌舞伎町) mutant kabuki-syndrome play.

His life had become a garish obscene Yaoi Manga snuff movie and it wasn’t pretty either. Maybe at first, but not later on after he somehow managed to survive his post-Fuckashima mutancy. He was supposed to die, wasn’t that how it worked? But what was this? This weird lizard storyline, this strange mutant monster skin-game? He didn’t die afterall—it just got worse. It was more Kafkaesque than a cockroach hiding in his room. It was more like a big snake shedding its skin. And becoming even worse...

Each time he engorged some living, breathing human prey from down there in the streets, it was like the lizard creature in him was extending its lifespan a little bit longer into something else. The mutant reptoid hunger ruled his every thought and action, there was no escape. It was all much more nightmarishly, terribly Kafkaesque—than just ending up some dirty, crummy bug. Since when were cockroaches supposed to get predatory? Awful lizardoid-like deformed man-eaters, deadly lizards that liked their human meat bloody, oozing and screamingly rare?

The delicate prey hid from him more and more. There weren’t that many straight humans left in downtown Tokyo anyway anymore. Even the red-light district was abandoned and haunted. He had to troll at night down in the dark subway tunnels and filthy gutters—for the young stuff that still hung around in the city. They tried to hide from him but it was useless. He could smell them out. He zeroed in on fear.

“Sayōnara,” he said to the dried-up, shriveled husk of another unfortunate human being he’d sucked dry from the night before. He gently gave it a push, shoving it out the broken window, then over the edge of the penthouse balcony, letting it sail down like a sack of useless garbage down into the street below.

Other lizards were immediately on it, scrambling for any tidbit or leftover piece of succulent humanoid meat that might have been missed. The gang of young lizards down below were quickly fighting each other over the bones and human remains, hissing and cursing each other. They were starving to death. And besides, lizards weren’t good losers anyway. They didn’t have good table manners that's for sure.

The Lizard Boy surprised himself. Suddenly a human thought hade sullenly managed to weasel its mongoloid way into his brain. It interrupted his usual louche lizardy cold-blooded attentions to what was directly in front of him. He was almost totally Lizard by now—reptoid consciousness had inched its way up the back of his neck, oozed it way up thru his reptilian brain and then took over his useless monkey cerebellum.

“Who is torturing us this way?” the teenage naked lizard boy suddenly asked himself out of the blue.

Nasty monkey discourse and stream of consciousness just got in the way. Lizard carnality ruled the day, and especially the night when he was alone, sitting on the balcony looking out over the dark ruins of downtown Tokyo. Something was always gnawing in the back of his mind, and it wasn't just a bloody piece of humanoid meat.

Although he couldn't help but think about imbibing a nice piece of choice human loin-cut flesh or maybe some nice fat tourist T-bone steak. He kept checking the cesium clouds for another one of those lovely tourist copters that would sometimes go astray and end up crashed down below. There were still adventurous, curious Hong Kong S/M queens & foolish types out for a thrill, flying low into Tokyo and getting off on the Draco District. Sometimes they got more than they expected down in the red light district.

There were even a couple of Lizard nightclubs open late at night, surrounded by the usual machine-gun armed praetorian guards from the Forbidden City. Cheap futuristic thrills for bored decadent Singapore clientele, those with a taste for slithery snakeskin sex or maybe alligator boy disco. In chains of course. Nothing that could bite.

There were the ususal gossipy urban myths spreading throughout downtown Tokyo metropolitan ghettos, about some of the surviving, reverse genetic-engineering sicko scientists who'd developed and morphed young mutant expensive hustlers and expensive high-class prostitutes perfectly human & goodlooking like movie stars for jaded Hong Kong and Singapore millionaires bored with nothing to do and looking for some new thrills. These mutant male prostitutes were as human as you or me above their thin svelt waists… but down below the beltline, below the cute bellybutton, that's where the ugly sexy lizard-boy horror show hung out...

The Lizard Boy hissed and smirked to himself. He was one of them. But he could care less about his genetic origins or the easy money to be had or the sicko wealthy humanoids who wanted new thrills. Because now he was totally morphed into mutant snakeoid consciousness...in body & soul… He'd been completely redesigned, totally reverse-engineered back a million years into time. He was totally, completely Lizard First Class and down between his legs there was even a worse lizard-monster slithering around... that even he couldn't control.