Lord of the Lizards III 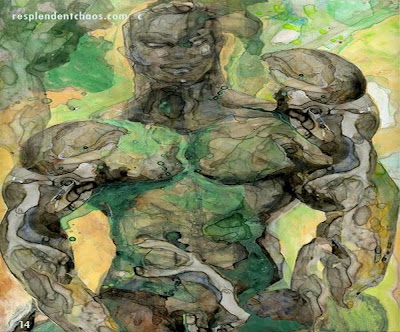 “Over the island the build-up
of clouds continued.”
—William Golding

From a certain point onward, there is no longer any turning-back. There is this point of no return that must be reached. Surely Kafka didn’t mean to say what he said—about becoming a cockroach. Surely he didn't mean that poor guy woke up one morning and was a filthy dirty insect—that somehow he'd just simply passed some point of no human return?

The Lizard Boy hadn't turned into a lousy cockroach—he didn’t particularly want to turn into anything. The Fuckushima lizard virus had got him that's all, turning him into the mutant monster nightmare he’d become. Nobody chooses to be a cockroach or a snake or a lizard…or even just a plain vanilla human being. It just happens that way that’s all—that’s the way it is.

The Lizard Boy had passed the point of no return. He didn't have any choice. There wasn't any father, mother or sister to pity him—or to hide him away in some locked bedroom. He was on his own now—avoiding mirrors and not looking at himself. He was prowling the streets alone—not looking at his reflection in the cracked and broken picture windows.

He was an Iguana in Heat. He’d troll for meat—fresh meat. It didn’t make any difference whether it was radioactive poisoned or contaminated by mutant lizard slime. His iguana eyeballs adjusted to the night—his former gang member buddies stayed away from him.

Getting up to the penthouse was easy now—no crummy stairwell & 50 flights of filthy floors to bug him. His sucker fingertips & gooey palms made scaling the outside of the condo skyscraper easy, slithering up the glass & steel ruins. It actually felt good to crawl and weasel his way up & down at night on the outside walls. He'd get flashes of jungle cliff deja vu and Mexican beaches. He was good at it… being lizard.

The only thing he had to watch out for were the nefarious overhead flying drones of death. They were killer robot drone machines the military had pimped out to the cops, along with new long-distance Taser machineguns and virtual pilots always hunting for freaks like him. They patrolled the city and kept the population of mutant reptialian riff-raff down.

Back in his Tokyo Hilton penthouse, the Lizard Boy flopped down the cute hippie chick he’d absconded with. She tried screaming and crawling off and hiding under her bed in the Sony Building, but he pulled her out and soon she was paralyzed and speechless. His long nervous Rotor-Rooter lizard-tongue deep up inside her.

There was a storm coming in—radioactive clouds were drifting down from Fukushima. Soon radioactive rain would be falling over Tokyo the dead city.