Interview With a Fukushima Mutant Freak 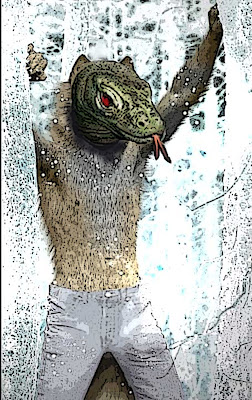 Interview With A
Fukushima Mutant Freak

Q: It’s been 20 years since the Fukushima tragedy. How are you doing, young man?

A: So, so. Most of the time I feel pretty shitty.

Q: Things have been rough for you Fukushima kids.

A: Lost my father during the tsunami. Mother coped.

Q: Any brothers or sisters?

A: I was the only one. One was enough.

Q: You grew up in Tokyo, after the earthquake-tsunami-nuke meltdown?

A: I stayed with mother till I was 15. Then she threw me out.

Q: You had problems at home and in school?

A: What school? I dropped out early. They hated me.

Q: Surely they didn’t hate you. What was the problem with your mother and teachers?

A: Well, don’t be a fuckin shit-head. Just look at me.

(The Interviewer looks the kid over. He’s obviously genetically deformed. Above the waist he’s your normal Japanese teenage boy. But below his waist something awful has happened. His right leg is simply huge and grotesque—ten times the size it should be. His foot is the size of an elephant, his black leather boots are gigantic. He doesn’t wear pants, but instead an oversized puce kimono with pink little mushroom clouds blooming here & there. It’s obvious the kid suffers from Genetic Elephantitus Fukushima Mutant Freak Syndrome (GEFMFS) like many of the TEMPCO Fuckushima atomic victims. The kid kept his left hand hidden in his knee-long kimono, constantly playing with himself.)

Q: What happened after you became a Freak?

A: I ended up in the Kabukichō (歌舞伎町) —entertainment and red-light district in Shinjuku, Tokyo. The Kabuki Yakuza Mob knew a good thing when they saw it — us Freaks were in demand. The tourist trade from Bangkok and Hong Kong were always looking for something new, kinky, abnormal. The bored American perverts were flocking back into town again — most of them size queens.

(The Interviewer raises his eyebrows. It’s obvious he’s an experienced pervert himself. He’s sizing the kid up, leaving his cell-phone video on, recording the interview, what the kid’s saying. The Interview reaches over and feels the kid up, cops a feel for the moody, sullen, freak rough-trade number.)

Q: What ya got hiding in the kimono, Big Boy?

A: Oh, all right. Here’s what turned the tourist perverts on, but like you may not like what you get…

(Standing up, slipping outta his kimono, letting the Interviewer ogle at what was waiting for him between the kid’s nefarious mutant freak legs…it was the last thing the Interviewer got to see before the End. The kid’s huge thick muscular leg was truly impressive, all veiny, distorted and lovely. But the kid’s mutant penis, what a freakish Piece of Meat it was! It was a Giant Writhing Cobra, coiling and uncoiling itself — just waiting for its next victim. The Thing flipped up against the kid’s hard stomach, up past his protruding bellybutton all the way to his tits, his erect nipples pulsating, hungry with little eyes on them. The kid was covered with exquisitely well-done professional tattoos, showing Nagasaki and Hiroshima going up with delicate pink mushroom clouds.)

(The weirdest thing was that the kid’s Cobra Cock seemed to have a life of its own, rising up and stretching out like an evil, unsightly, shocking version of a huge horrible Sushi Octopus from Hell!!! It was several yards long and thick as the kid’s leg, writing and twisting, a vast Tentacle of Shame with rows of pulsating pink-sushi suckers, starved and famished for human blood! The Cobra Cock raised itself up totally Erect, like the King Cobra outta that infamous campy Hollywood horror flick “Cobra Island” (1943) with kitschy Maria Montez chewing up the scenery, doing an obscene hoochie-choochie dance in front of the hypnotized doomed worshippers writhing at her feet. Picking this one & that one to be sacrificed to King Cobra, to placate the moody, rumbling, erupting, ejaculating Volcano of Death haunting Cobra Island. The Interview stands up to flee, but the kid’s kinky King Cobra gets him first, wrapping its thick coils around the Interviewer’s skinny neck. Squeezing, squeezing and squeezing some more, sucking the life-juices outta the latest struggling, screamy victim of Mutant Hate and Twisted Deformed Desire!!!)

(You’d be surprised by how many curious, jet-setting, bored NWO Elite mutant pervert aficionados end up in the clutches of the kid’s freaky revenge clutches, all grisly, drained-dry, discarded in some dumpy Red Light District Motel Room, that’s how the Fukushima Bad Boy Freaks do business. It’s how the Tokyo Yakuza Mob operates, getting even with the evil decadent TEMPCO TPTB perverts…)