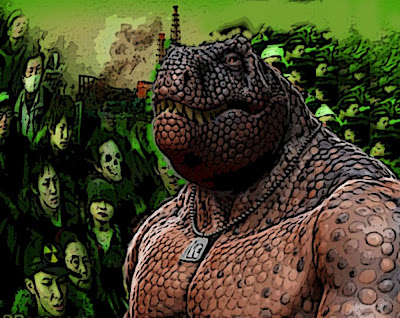 "When I left earlier, I asked you to forgive me if I spoke bluntly. (Klaatu pauses, studying the faces) The Universe has grown smaller & smaller since the Fifties — and the threat of human aggression by you lordly unruly naked apes can no longer be tolerated.

There must be security for all—or no one is secure... This does not mean giving up any freedom—except the freedom to act irresponsibly. Eisenhower & your other presidents knew this when they made treaties with us—to help govern you humans governing yourselves."
_________________________

"But now you’ve started causing trouble again—HAARP, earthquake weapons, weather control, Telsa technology, DNA population control, even quantum time travel. All these gifts we collaborated with you for the betterment of humanity—all of it’s been wasted. You’re a nasty warlike territorial species—your greedy Machiavellian leaders have trashed both you & your planet. And completely fucked up the exopolitics agenda here in our sector & queered your chances to join us in the Galactic Council.

We and all the other Ascending planets have long accepted this principle—our belief in raising your consciousness to the 4th dimension so you can join us in the full 10 dimensional universe. We have an organization for the mutual protection of all lower dimensional planets—and for the complete elimination of aggression. I’ve been sent back down here to your Planetary level again—because you’ve not passed the test to be any higher authority than where you are now. Of course, there is a Force that supports us—which now is descending on you."
___________________________

"For our Galactic Mob Enforcement purposes—we’ve created a race of ruthless Yakuza Lizards (indicating the Lizard Gort). Their function is to neutralize problem planets—much like your screenwriters have done with your usual Monsters of the Id like Godzilla & King Kong. The Yakuza Lizards mission is to destroy you—in order to preserve the Intergalactic Peace. In matters of primitive aggressive planets such as this Island Earth—we’ve given the Lizards absolute power over you...

At the first sign of violence they act automatically against both aggressor & victim. And the penalty for provoking their action is too terrible to risk. The result is that we live in galactic peace—without playing dirty with clone armies, DNA back-engineering, manmade plagues or interplanetary space wars like your nefarious NWO mob. We’re secure in the knowledge that we are free from aggression and war—free to pursue more profitable enterprises like colonizing the Milky Way Galaxy which is immense & ancient & reaching outward."
__________________________

"We do not pretend to have achieved perfection—we regret using our Lizard Enforcers to eradicate your somewhat perverted, exopolitical Existence. It’s not your fault that your genetics have been messed with—many alien races having used your various races for their old Cosmic Wars & Alien-nephilim-giants-demons-giants breeding purposes from Sirius all the way to Aldebaran, from your Lunar Death Star looming over you to your lost secret pyramids on Mars."
_______________________

"But we gave you a chance—and it didn’t work. I come now here to give you the facts. It is no concern of ours now how you run your own planet—your dayz of threatening to extend your violence beyond this Earth of yours will not be permitted. You’ve already messed up the Zoid Zeit timelines—with your DARPA assassins & Illuminati intelligentsia. You will now be reduced to a Jurassic Fun Park once again—let the fun begin!!! BTW the Lizards love juicy tasty hominid T-bones & nice Big Mac loinchops.

Your choice was simple. You could have joined with us and lived in peace. Instead you pursued your nefarious irresponsible course—and now you must face obliteration. But it won’t be quick though. You’ll set an example for any future aggressive upstarts—as we film for the YouTube Galactic Masses the lovely bloody Lizard soap opera about to descend on your miserable disappointing little world now..."

And now a word from our Sponsors.....

Posted by pugetopolis at 9:35 PM