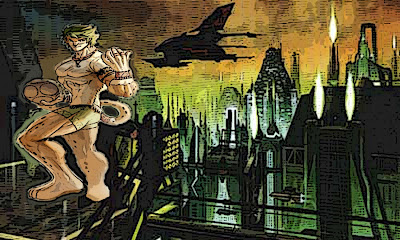 They were known as—the Obscene Boyz of the Mutant Night. They started showing up on the streets of Tokyo soon after the earthquake-nuke disaster—mostly in the Red Light District.

Something about the abnormal genetics effects due to the radiation exposure—accelerated the mutant effect. What showed up in Chernobyl took several years—mutating the vulnerable embryos into distorted young freaks. But something weird was happening at Fukushima.

The Plague of Mutants started happening overnight—pouring outta the doomed city. Alarming reports were concealed at first—the shame of such a Nuke Freak Problem was quickly concealed by TEMPCO and the compliant media. How could such a thing happen? Hiroshima & Nagasaki weren’t this bad?
_______________________________

Apparently TEMPCO was conducting secret DNA research in a secret lab beneath one of the reactors. It was obliterated by the nuclear detonation—caused by the deadly earthquake & tsunami in March. But by the fall there were already reports of strange mutant boyz & freak creatures haunting the suburbs of Tokyo. Who or what were these teenage creatures?

Apparently a consortium of Yakuza-Corporate nefarious interests financed by Elite’s own Japanese secret “black budget”—had been developing a klone army of neo-kamikaze advanced techno-genetic superboyz for purposes yet unknown...

The huge amounts of energy needed for such reverse-engineering experiments involving DNA-mutated freaks—resulted in chromosomal monstrosities that were highly advanced & greatly appreciated by the Mob & TPTB who had plans of their own for financing a born-again “Asian Cooperation Sphere” known as The New Rising Sun.
_________________________________

The intake from klone brothel Red Light District businesses across the vast stretches of Asia and the Pacific was quite lucrative in itself—with drugs, prostitution, gambling & the usual Jap Mafia business specialties enhanced by genetic perversions catering to all the usual decadent Western tastes.

These bizarre Fukushima sex-creatures—seem to have broken outta the Underground Jap Freak Labs after the earthquake, tsunami & meltdown. Rumors quickly spread throughout Japan—that these virile Mutant Boyz had been grown for TEMPCO executive sex parties by the romantic seashore.

These Mutant Boyz had entertainment purposes—such as female orifices throbbing like mutant pussies growing outta their muscular physiques. The rich Elite were now being blackmailed—by the Yakuza mob demanding their own cut & action from wealthy Japanese businessmen. Tokyo despite being contaminated by radioactive air & water—was now being flooded with even more sex industry tourist trade wanting to enjoy the new exquisitely disgusting Mutant Boyz entertainment veue.

It was in this freakish Mutant Twilight—that I now prowled the Tokyo streets & dark alleys, preying on the latest young male hustler abnormalities to come my way. It was a nasty, lonely, dirty, perverted business—seeking out & taking advantage of young virgin Fukushima Freak hustlers & brainless well-endowed mutant male prostitutes. But somebody had to do it—and it might as well be me.