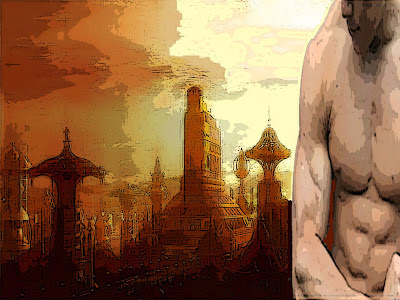 The first thing that the Tokyo Red Light District queens noticed—was that the new Fukushima Freaks weren’t UGLY. In fact, many of the Mutant Bad Boyz were extremely handsome & seductive in new & strange ways.

Naturally I yawned & shrugged at it all—I’d been jaded a dozen lifetimes times over & over again this way. So that it was all just old business to me. As far as I was concerned—the so-called New World Order was no different than all the other Ratty Nerdy New World Orders that had come & gone since the Fall of Rome. It was all tres kitchsy Kabuki Killer Theater to me—this latest Jap Fag Noir episode. It wasn’t any different than the American Forties-Fifties Gangster Postwar Period with all those crummy Grade-B Noir butchy badguy flicks like “Outta the Past” (1947) or “Concrete Jungle” (1950) making me feel fag noir foolish & more decadent than I actually was back then. But that was back then & this was now.

The suppressed urges & greedy appetites of the Tacky NWO Elite Leisure Class—was no different than just another Titanic crammed with screamy rich folks going down, down, down. Call it ennui or weltschmertz or just plain boredom—whatever it was it would take more than a Mob of Mutant Kept Boy Fukushima freaks to get my Hopes up. My Post-Fukushima Hopes—and anything else that was otherwise on the same old boring event horizon. Like Tokyo back then was another fuckin limp wet noodle, you know what I mean? "Wake me up," I said to myself —"when it's over, will ya?"
_________________________

The Kabukichō (歌舞伎町) entertainment and red-light district in Shinjuku, Tokyo—was the first spot to notice the strange influx & invasion of these young male Fukushima Mutant Freaks. Naturally or perhaps unnaturally—they’d probably gravitate here just as soon as anywhere. I was glad that Tokyo was Hip again—and back into illicit sex & male prostitute business once more. That'd be good news to any old queen—even a has-been old queen like me just back from a crummy soirée in the Clarence House back in London. Queer quantum jumping aint fun...especially if there's a lizard in your closet.

The Jacuzzi Tub Mob had quantum-jumped my skinny ass—back in time to post-Fuckushima after sending me on my mission to schmooze with a couple of Royal Reptile boyz. The Abdication had mysteriously fallen through at the last moment—the so-called "Operation Dandelion" (Philip K. Dick's Man in the High Castle) had been left in place because of the totally unexpected recent lucrative Fukushima Freak Mutant Mob Success Story. At least for now. Prince Harry just smirked when I said goodbye...

Things had worked out just fine for the Mob—the Yakuza Mob, the Royal Reptile Mob, the Beltway Mob, the Bankster Mob, The Black Budget Space Patrol Mob—and all the other various & sundry greedy Gringo Gangs up & down the Terra Feeding Chain waiting to colonize, terraform & rip-off the rest of the Sucker Solar System.
______________________________

I just happened to be hanging out at the Zero Club the other night—one of the less conspicuous Kabukichō hole-in-the-wall Sake joints. Bored & really not hungry—I was thumbing thru their Sushi menu looking for something new. When in thru the door came this Octopus Kid—with 8 writhing tentacles growing outta his head & a slinky sluttish look in his eyes. Each twisty tentacle had dozens of drooling, quivering suckers—all nervously attuned telepathically to all the other ogling customers in the the joint.

The kid sat down next to me—and ordered a squid cocktail dish, the specialty of the house. The squids were all alive & squiggly—you’d dip them in this special teriyaki sauce & feel them squirm like earthworms all the way down your greedy gulping gullet. I smiled & ordered him a double bourbon. He'd need it just to do the squid cocktail right.

The Octopus Kid was cool—seductively icky & octopodal like most young teenage hustlers can be. He was simply oozing with young mutant male hormonal overindulgence. Obviously a messed-up, malignant Mutant Boy—probably the klone offspring of some fucked-up Fukushima Lab Genetic Experiment gone wrong. “How much wrong?” I pondered to myself. Thinking of all the exquisitely disgusting nightcrawler possibilities...
_______________________________

The Kid seemed to read my dirty mind—and smirked at me, playing hard to get. Homoerotically perverted psychic powers were the name of the game with this new species of Nexus sex-replicants. Japanese Mad Scientists were madder than most—they made the Herr Doktor Professor Pretorius types hanging around those sullen Count Frankenstein fetid Euro-Laboratories down in the basements of those dirty old dumpy castles back in the Thirties look like Amateur Two-Bit Las Vegas Used Car Salesmen on the lame hustle. Where did James Whale dig up that faggy Ernest Thesiger anyway—outta some dumpy Weimar cabaret Berlin bar?

By the time I got the Kid back to my place—I was already enthralled, enraptured & intertwined with his totally unique eight Tentacles of Suckered Sushi Sake Love wrapping & winding themselves around my neck & leg. I stood in front of my full-length bedroom mirror afterwards—gazing at the dozens of sucker-hickies criss-crossing my poor skinny pale naked body. I left a rather rude magnificent black & blue hickie of my own on his you know what—on his huge ugly mutant piece of primal octopus meat. My hickies felt like shameless subterranean tattoos—made by a strange boyish mermaid creature who was more octopus than man.

Admittedly I felt somewhat guilty and shameful—indulging my way for that first time of weird sexuality having Exo-Zoological Sex with a Mutant Kid that was more Octopus than Man. But I soon got over it—in fact, like many Tokyo denizens of the ongoing Fukushima Freak Show, I kinda liked it compared with the same old usual Naked Ape Bomba Jungle Boy Sex Routine. Those Jap mad scientists sure did dream up some nice Succulent Sushi Sex Toys to get it on with—the Zero menu had expanded muchly.
______________________________

Yes, Japanese Exo-Zoophillia Sushi-Sex was a winner Zeitgeist Zinger ever since Fuckushima—Tokyo had become the raunchy radical Stem-Cell Sex Change Capital of the World. People were consulting their Crypto-Chromosomes & Dirty DNA Strands like Tea Leaves...with underground geneticists reading their fortunes. It was like going down esoteric Grocery Lists or Betting on the Vegas Slot Machines or playing the Horses. The once Esoteric Genome Project with its realm of computing wizards—was now on everybody’s Lips & down their Greedy Gullets.

The next time I walked into Zero the dumpy Shinjuku Sake Joint—their new Mutant Menu proudly displayed a whole new Repertoire of Reptilian Boy-Toys just in from Mexico. “Ever Experienced Iguana Love—Humping Away in a Jungle Hammock?” I’d noticed a homoerotic upsurge in Reptilian Raptor Ratboyz—moving in their Rough Trade Mob circles & taking over some of the Japanese Mutant Market profiteering slots.

There was a Big Squeeze going on now—probably the Yakuza Mob was behind it. Snakes, Crocodiles, Alligators, Iguanas, Lizards & Boa Constrictor Badboyz—were all popping up in the burgeoning Alt.Genetics Sex Industry Business in Tokyo it seemed. Reptile boyz, Lizard boyz & Snake boyz were definitely "in" after Fukushima—the same with Lizard Girls etc. This New Cross-Species Transmutation Market of Mutant Freaks—was fraught with many Future SF Fuck-Ups & depressing Dystopian Downers, I said to myself sipping my sake. Then the Octopus Boy walked into the Joint...and things started to look up.

Posted by pugetopolis at 4:23 PM