Interview With A Lizard 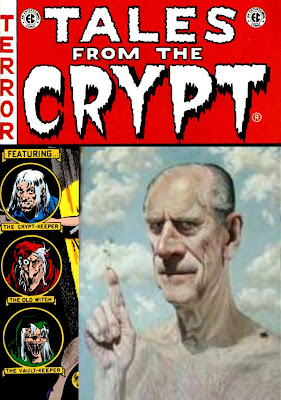 Interview with a Lizard

“In the event that I am
reincarnated, I would like
to return as a deadly virus,
in order to contribute
something to solve
overpopulation.”
—Prince Philip

BBC: Charming, to say the least—
Exquisitely snarky to the very last…

BBC: Yes, my dears—
We’re lucky today to have with us
The esteemed Duke of Edinburgh.

So, you’ve done rather well, sir.
For a spoiled old gigolo Kept Man…

Yes, my dear, like who’s gonna tell—
The husband of the Queen of the
British Empire—to shut-the-fuck-up?”

Prince of Edinburgh: Young man.
I’ll try to say it calmly & soothingly—
Although trying to reason with poor
Humans about things is rather useless.

BTW pour me another drink, will you?

BBC: Of course, sir. I consider
It an honor to pour a drink for the
True Power Behind the Throne.

Prince of Edinburgh: Well, well…
You’re certainly wrong, of course.
But flattery will get you everywhere.
You look plump & full of male hormones.

The Prince nods—
Trying not to shapeshift into his
Normal attack-mode Snake appearance.
The shock of Royal Reptoids on TV
Would be just too much—
At least now before the lovely
Apocalypse & the alien saucers would
Start landing at Buckingham Palace…
___________________

BB: Well, maybe the Prince is right,
Some Parliament members & Party
Hacks are saying these dayz, sir.
“Human beings are just a bunch
of useless breeders…with hungry
fucking mouths.” It does get rather
depressing, covering all the lame
bad news, lately, Prince Philip.

Prince of Edinburgh: That’s more
like it, he sayz. Being a Brit royal
parasite & freeloader—I can’t really
talk about all that bad news. We
NWO Globalists—we’ve gotta be
pretty smart dudes, don’t ya think,
huh? huh? Just look at
the world mess today.

The Prince has another drink—
And nods somewhat sleepily
with his droopy iguana eyes...
Recently Prince Philip was
on the Tube: To a student who had
been trekking in Papua New Guinea:

“So, you managed not to get eaten?”

(Prince of Edinburgh: I ate him instead.)

BBC: The Prince recent to
Elton John after hearing Elton
had sold his Gold Aston Martin:

“Oh, it’s you that owns that
ghastly car – we often see it
when driving to Windsor Castle.”

Prince of Edinburgh: I would’ve dined
on Elton John too, but, you know, those
gay lamb-chops & T-bone steaks can be
such tainted meat, my dear. If karma
makes me a virus again, well, that’s one
Group of lowlife I won’t have to infect.
They’re already quite contaminated.

BBC: You really do truly, Prince,
understand our British sense of dry
humor, don’t you, sir? And knowing
the Queen & the Clarence House Mob,
well, this is just what Lizards would
expect, a little wry humor?

Human fear & adrenalin hormones are
for us simply delectable hors d’oeuvres.
We lower fourth-dimensional Draco
Aristocrats—no matter how much
DNA static there is to deal with
We're ready for the Shit, I mean Shift.
BBC: You Lizards do breed well tho,
don’t you, Prince?
Prince of Edinburgh: Well, that’s
a serious concern, of course. You
humans do breed prolifically and
most of time without very much
consideration for the consequences,
especially the less educated ones.
30 or 40 years ago they discovered
that a quarter teaspoon of salt and
half a teaspoon of sugar in water
cured dysentery in Africa. They
predicted then there would be
massive tasteless population
growth and starvation within 20
to 30 years and they were right.
Dysentery killed a lot of children
and kept the population down, it
also culled out the weak. Now
there are too many people for
the food supply and genocide.
What fat gluttons we Reptiles
Became engorging ourselves with
Too much Big Mac meat & fatso
Fast food chicken, my dear,
__________________

The Prince just sits there—
hissing, glaring & staring at me.

”And vaccination,” he opines.
“It may have saved the lives
of many children who might
have died, but on the other
hand, it destroyed their immune
systems and these same children
as adults have cancer, lupus, MS,
ME, RA - a host of debilitation
and devastating illnesses. Besides
the vaccination programs are
virtually destroying the human
genome. Indiscriminate breeding
and the survival of the weak
ultimately destroys the animal
using it. As well as the consumer.
__________________

The Prince is getting ready to—
strangle me it seems.

Another example,” he said.
A small herd of reindeer gets
put on an island without any
natural predators. The herd
increases in size to over 2,000,
then they started dying off.
The reason - the weak animals
have bred and weakened the
genome for the whole herd.

The Prince is beginning to
look downright hostile & mean.

We might have overpopulation
now, he sayz. But within a few
generations, we will have more
cases of Fukushima radiation
mutants & deformed births in
Japan—just like we have with the
Russian Chernobyl nuke accident.
Plus lots more infertility, the usual
miscarriages, children dying in
infancy, weak human beings and
ultimately, dying out of humanity.
Where would that leave us Lizards?
We’d have to time-warp to some
other Host Planet—dimensionally
succulent with its own troublesome
perhaps rather exotic Menu…”
__________________

The disgruntled Prince gets up to leave.

BBC: It’s clear that we & Prince Philip
think a lot alike. That we think that
we're overpopulated and neglect to
see life as a gourmet gift. We should
all pitch in & join the Royal Reptile
Agenda to avoid the awful Fukushima
Mutant Meat Danger & the Gulf of
Mexico Shrimp Cocktail Contamination
Problem and do our part for this old
Lovely Lizard Planet of ours. That's
the best contribution we can give
to the Prince & his Reptoid Dynasty.
We won’t have a chance soon to
collaborate with such an interesting
Illuminati Mob to increase the breeder
population if we don’t wine & dine
Them properly like Reptoid Royalty.

Prince of Edinburgh: Thanks, but
please don’t get all sentimental on
me like you humans usually do all
the time. It makes me hungry…
_______________

BBC: Get real, folks. We’re just
being cowardly—about Prince
Philip & the Slither Queens. They’re
afraid of losing everything, they’re
obsessed with power, we need
to submit to the Lizard new world
order of reptilian greed & planning.
Let’s not try being "outcast" naked
Apes—with our so-called Monkey
Minds. The human media has been
injecting all this elitist bullshit—
brainwashing us everyday into
puffing us up, from all angles.

BBC: Yes, folks, there's more than
enough money in the world to go
around—and plenty of hidden
black-ops stealth-tech to give
every one of us a long life
expectancy of 30 years average
and for many more years to come.

Prince of Edinburgh: “Yes,” the
Prince said, yawning, sipping his
gin. Just think of all the boredom
you’ll have to endure being without
us on this dumpy little planet
without us Lizards being around
like we’ve always been…
Posted by pugetopolis at 9:08 PM