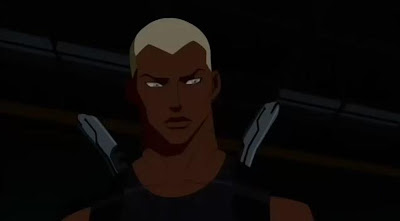 Life with an Exo-Mutant Fukushima Kid was as much as I expected it to be. He was harder, more sophisticated than they’d been in Tokyo. I paid his rent & his passion wasn’t so lyrical—but I was grateful for both.

What I would’ve called kinky two or three years ago—was now simply typical young Japanese libido. However, he was also an exo-mutant ninja now which, I suppose, may have been inconvenient for some but nevertheless was exquisitely okay with me.

Forgive & forget—those were 2 words the Japanese had to live with after Fukushima. The same after Hiroshima & Nagasaki. Resignation was the same as becoming—for each younger mutant generation.

The Japanese were experts in reverse genetic engineering. Many of their best scientists had won the Nobel Prize for stem-cell research—and post-Fukushima conditions speeded-up plastic surgery & transplant restoration after the nuclear tragedy struck back then.

I was reading. The kid was lying on his back & I heard this voice: Samuel R. Delany said that a page of an exo-mutant ninja yakuza novel smashed up—equals a page of Gertrude Stein.

What Mr. Delany meant perhaps was that he thought Miss Stein was purely negative—but isn’t that the best way to describe human behavior? Purely negative?

Miss Stein is writing & talking. In some ways these are the same. In both cases she is smashing the pages of a modernist SF novel. Except in this case, the kid is a mutant exo-Ninja hustler—smashing Japanese culture.

I was pleased. We didn’t go dancing that night at the Exo-Disco. Instead we made love—mutant exo-Ninja love. The bedroom mirror showed his face—with the blinking neon light glowing down thru the window.

Other people too were stunned by his goodlooks—friends came & went to get a good look at his mutant genetic endowments. They even wrote long scifaiku poems—to his exo-mutant young male beauty.

Bashō even showed up—rather rested-looking from his journey to Titan. Without equivocation & with much authority in his tone—he talked about mutant exo-scifaiku poetry as a secondary sexual characteristic.

In other words, poets now wrote to describe the new exo-mutant bisexual beings resulting from Fukushima—but even so the exo-mutant kid was 10 times what Bashō expected. The kid was almost super-human, even subliminally subhuman—definitely sexually reptilian.
_______________________________

Big deal—that was no news to me. The kid’s inability to find a proper social outlet was okay with me—why let others in on my own exquisite secret. The kid never failed to produce—the most excruciating mutant progeny imaginable. Each time was exquisitely otherworldly...

I kept him to myself—he was so alien & so very vulnerable. He rarely smiled with all that mutant meat attracting me to him—although the weed & cocaine perhaps helped. Somewhat embarrassingly I suppose.

I nick-named the kid K-Y—because sex played such an important role in his life. The expression on his face when he lost it—momentary fainting at the very end. It was like a whip that got cracked in the dark & then his eyes going cross-eyed—his oily black slick-backed Elvis the Pelvis pubes & adolescent alien slit-eyes.

He’d have an abortion each time—a pint or two of rich thick Russian exo-caviar. Afterwards I was extra-polite—giving him chartreuse drinks & chicken sandwiches. He never thanked me—he was a spoiled young aristocrat of love. He pouted a lot. For a reason...
__________________________

The negro piano player upstairs—played all night long for us. We danced together—who knows how many mutant sons & daughters were left smearing my soiled lips? Fukushima boyz were hot… more than just radioactive...

I remember the first time. Come on in & undress I said. I was more than pleased when K-Y slid outta his dirty jumpsuit. Damn I said to myself—I’ve hit the mutant exo-ninja jackpot. Talk about cute roughtrade yakuza...

I took him past the kitchenette into the bedroom—and locked the door behind me. I got him into bed—and he poured himself into me. He must have sprained his neck a dozen times that first weekend—his long lanky legs almost strangling me to death. I was in a trance all summer—K-Y was my new young troublesome Exo-mutant kept boy.

Posted by pugetopolis at 7:25 AM