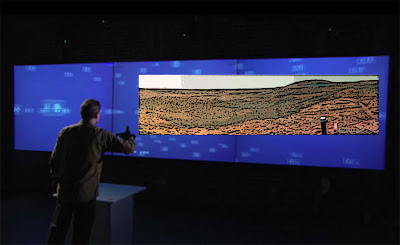 The kid sat there on the other side of Corso’s desk.

Corso was looking at the vide-screen—admiring the Gettysburg panorama. Smoking his cigar—smiling to himself.

“I look pretty good in a Union captain’s uniform, don’t I, kid?”

“I like those uniforms back then. The style & way it looks on me. Better than my air force khakis.”

“Did the lieutenant recognize you in the image?”

“Not that I know of, kid. Of course, he could’ve been faking it. It didn’t take DARPA very long to show up did it? They must know something’s going on. Or coming down. Or whatever...”

“I hope I haven't endangered you, General Corso.”

“Thanks, young man. But I can take care of myself.”

He blew a smoke-ring at the kid...

“Tell me, kid. You think I made a good impression on Mr. Lincoln?”

“Well, sir, we wouldn’t be meeting him tomorrow in DC—if he wasn’t concerned about what you said.”

General Corso nodded, turning to the vide-screen. He replayed the two of them walking across the way—then fast-forwarded it to the speech. It was a short speech—Lincoln’s voice was high-pitched, the man was exhausted.

“How much time you think he’s got left?”

“Yeah, you’re right, kid. He knows it too—he wants to see the end of the war through first though. They’re not gonna like his plans for Lee, the South or his version of Reconstruction. Welles & that bunch…”

The kid sighed. “It all depends on Lincoln now. I guess. What he wants to do—with the time he's got left to him. Knowing what he knows now, well, it might make him wanna hang around as long as he can. Skipping the Ford Theater quickie.”

“Jaysus, kid. You really got me in deep trouble now. You certainly know how to complicate the plot. What a predicament. Here I am. Right smack dab in the middle of another war—while I’m in the middle of picking up the pieces of this other war 100 years later. I can’t really map out my own new time-line tho I supose—until whatever happens happens. Who knows how long the Man will last? He's got his own Breakaway mob to deal with. At least he knows about it now...”

The kid didn’t say anything. He hadn’t mentioned anything to the other Pegasus trainees downstairs either. Some of them were pretty banged up—others wouldn’t make it probably. Open-heart surgery hadn’t been developed yet—it was still the early ‘50s, the Cold War was definitely doing Big Time Business now. Big time with the Breakaway shift down in Argentina & Chile...

Both sat in silence—thinking the Unthinkables. The kid could’ve read Corso’s mind—but he was exhausted. He chose not to go there—enjoying Corso’s spontaneous repartee instead. He liked Corso...he trusted him. He was walking a tightrope now... a time tightrope in a tangle of snaking timelines. If Corso only knew all the timelines were timelies....................

“What do ya think of that DARPA lieutenant—time-traveling all the way back to us in the ‘50s to feel me out?" Corso said. "They must have leads or timelines or something up their sleeves. He said they didn’t know where you guyz were—or who the Union officer back there in Gettysburg was with you. Quite a little spy game we got going on here, huh? Kinda like the Bormann mob don't ya think? That lieutenant wasn't genuinely shocked I don't think.”

“Yeah, I know, general. But that’s the problem with moving multiple-timeline docuverses. Lots of possible storylines, lots of different subtexts, lots of Looking Glass paradoxes waiting to happen. It gets dicey.”

“Well, you must be tired, kid. Let’s call it a day—we'll just have to wait & see. Hearing the Man deliver that Gettysburg Address sure did reverberate thru that crowd, didn’t it? You couldn't hear a pin drop—just us lost angels standing there, listening to his words. I was totally enthralled by the man.”

“Yes, sir. The angels.They probably were all there, sir. From many dimensions & familar places. Good angels & bad angels. And galactic council angels too. Funny how such a short, concise, quick Text like that—can suddenly synchronize & fold everything right down into itself. Like an interstellar Black Hole manifesto. Funny what you can do with words, isn't it, General Corso?”

“I know, son—I could feel it too. Everybody in that hushed crowd felt it too. Lincoln is quite the word-master, isn’t he?”

“But he seemed so lonely sir. The loneliest man in the world.”

General Corso closed his eyes. “Yes, young man. I only met one other man as lonely as he was. And that’s Harry Truman—the day FDR died & Truman became President... He said he felt like the whole world had all of a sudden come crashing down on his shoulders.............”