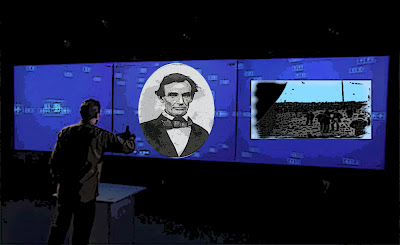 “What is a story?”
—The New Yorker

“So, lieutenant, what the fuck happened?”

General Corso didn’t mince words. He had plenty of other things on his mind—without having to solve some harebrained DARPA mindfuck problem coming his way.

“The Gettysburg kid is a rogue QT agent—a DARPA runaway spy who won’t come back.”

“A Quantum Time-Traveler trainee who doesn’t wanna come back, sir.”

“Come back? WTF does that mean?”

“Well, sir. It’s somewhat complicated. Let’s see, how should I explain it? Ever seen Richard Burton in that cold war spy flick The Spy Who Came In From the Cold?”

“How could I, lieutenant? It’s not been filmed yet.”

“Skip it, lieutenant. John le Carré hasn’t even written the goddamn novel yet. I know who he is though—he’s been a valuable asset to us down the line. He already has helped us. But what does le Carré have to do with this young QT spy thing anyway? It ain’t in my bailiwick, mister. You DARPA guyz know that. So why are you bothering me? I’ve got serious business to take care of.”

“Well, sir. It means he’s a Quantum Time-traveler we sent back in time for some orientation standard training—the usual Telsa teleportation method. We’ve since switched over to the more advanced 3-D hologram QT process, but…”

“Skip the technical stuff, lieutenant. Just the goddamn facts. C’mon or get the fuck outta here.”

“Well, sir, he’s gone QT AWOL. Back there in time with this so-so US history jump—Gettysburg.”

“Not that day? Lincoln’s address?”

General Corso looked at the image on the screen.

General Corso swiveled the screen over so the lieutenant could see it on the vide-screen. The young intelligence officer was stunned. The digital image had changed—the hologram crystal had morphed in the last hour into something totally new. The kid had a companion. An officer in a captain's Union uniform. He was showing the kid a map or something.

The lieutenant leaned over the general’s desk, ogling at the screen. Then he pushed a DARPA file over the battle-grey old metal desk to Corso.

The desk was an old memento piece of furniture from his WWII officer’s past—it seemed strangely outdated & out-of-place; yet Corso felt at ease with its beat-up, scarred appearance. Like an old B-17 out of the past. Corso rarely got nostalgic for the future tho. Especially after being in charge of the Roswell Research & Development black ops program.

The DARPA file was thick—but paper-clipped to it was an aging photo from a Civil War Archive showing this awkward kid shambling in front of the low podium where Lincoln would give his memorial Gettysburg Address.

But on the hologram screen, the QT crystal showed an officer, his face covered, in an intense conversation with the errant youth shambling his way through the mud in the updated time-image.

“So he was there before, huh?”

“Yes, sir. He teleported there with his father—a DARPA mathematician. Incognito though—letting the kid acclimate to the Effect. Everything seemed normal—there wasn’t any sign of trouble. No multiple time-line complications up until then. I mean now...”

“Yes, sir. We postulate that his mission to Mars assignment didn’t go well with him.”

“I don’t blame him. Mars is a fuckin’ goddamn Hell Hole anyway. No doubt about it. He went through the usual training orientation / debriefing I presume? Obviously he’s not good psyops material for you DARPA boyz.

“No, sir. But we had reports that down-line he’ll end-up being an important whistleblower in the future.”

“So your plan was to neutralize him? No wonder he didn't wanna come back.”

“No sir—well,we got orders from the Top that he was a Special Agent. He’d escort & usher in the QT Revolution after the Japanese Yakuza Korea-China Mob Co-Prosperity Sphere incident. You know, after the Fukushima blowback & BP Gulf depop psyops came down.”

“Goddamn it, lieutenant. Who do you DARPA folks think I am anyway? You skip around in time like a bunch of stupid jerks... Playing God like it was some kinda stupid chess game—tweaking people's lives & popping zits on the fuckin’ Zeitgeist. I’m not your goddamn babysitter. I don't like what you're doing."

"Get outta here, lieutenent. Go fuck yourself & find somebody else to play your goddamn games—I’ve got some serious business on my hands. You know my assignment, mister. Manage reverse engineering research from Roswell up to now. The Nazi Breakaway Gang down there in Peron's Argentina…they make you DARPA boyz look like a bunch of pusseys.”

General Corso bit down on his cigar stub—looking at his watch. He had an appointment coming up with some of the Big Bank Black Budget boyz—they were worried. They had their eyes on greasy Bormann fingers in the pie there in NYC & Berlin. Especially getting Germany unified again. Paperclip politics… plus the wall was coming down real soon...

“Where's this kid gonna run to now? To make his so-called defection? I presume you can't trace these Time-Traveler defectors...or can you?”

“Well, we don’t know where he went, sir. He left some enigmatic Zeitvernichtung signatures behind him—hinting DARPA could go to hell. He didn’t want to be assigned to Mars—it’s pretty hazardous up there; plus hostile to most humans.”

“I don’t blame the kid. That was a poor judgment on your part. Using young adolescents for the usual adult military psyops patsy programs—then getting rid of them if they become troublesome assets. So what if they go truant; they're just adolescents. You guyz are worth warm spit, you know that? I bet you were probably ready to off him up there. On the Red Planet?”

“Well, sir. He’s always been a security risk. But TPTB overruled us—they saw the advantage of using his excellent linguistic-legal skills later on for their own purposes. To use him as their “Teller of the Tale” Poster Boy. Not everybody agreed with it. Especially the Rumsfeld-Cheney Gang. Writers don't make good patsies, sir. But we're stuck with the kid for now. Plus he's a precog...”

“Yeah, I’ve heard all about Rumsfeld & Cheney. They’d use the kid, then use him to discredit himself & the program if they had to. Or set him up & blame him for something. All typically Machiavellian civilian bullshit…”

“Well, sir. This is between you & me—but for some reason the kid’s crucial to the whole Precog crime intervention crowd—TPTB are revising their whole Exopolitical strategy. Redefining the usual post-NWO late capitalism negotiations—to keep the Embargo going.”

“Yes, lieutenant. And DARPA is the Wizard of Oz…”

The lieutenant nodded reluctantly—knowing his last-minute mission with Corso had been a miserable failure. So much for his promotion...

“Skip the goddamn bullshit, lieutenant,” Corso said, eyeing the screen, blowing a series of smoke-rings at it. "You don’t even know who the other guy is. Another one of your errant DARPA precogs?”

The room was silent for awhile. Corso was thinking.

“Tell me, lieutenant. You think this kid is going to fuck up things back then? Like blow the whistle to Lincoln? Warn him about Ford’s Theater? Maybe screw up Reconstruction? How goddamn rogue is he gonna be?"

"Or is he just a kid who’s sick of your constant, no-good mind-fucking him from grade school on? Why should he wanna be your asset in the future? So he'll end up like you?”

“Sir, we would never abuse…”

"You're worried what the kid is telling the captain, aren't you? Your DARPA superiors are afraid he's a whistleblower? Gettin' ready to spill the beans on the future agenda? I wonder what Lincoln would think about your goddamn timeline nightmare plans?"


"Go on, get out. You’ve messed with this kid bad enough big-time in my book—and now you’re messing with me. I’m not here to play your pawn in your Beltway power-games. I’m the corporate contact between Paperclip & the Nazis. They’re gonna go Breakaway soon enough—without any more help from us than they got already. That’s how the fascist-corporate mindset works, lieutenant. Even this stupid, lame-brained, old worn-out USAF general knows that. Go back to Rumsfeld & Cheney; and lick their asses, not mine. Good day, lieutenant.”

Posted by pugetopolis at 7:08 PM