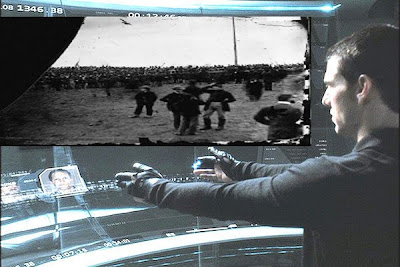 “You’re acquainted with the theory of precrime, I suppose? I presume we can take that for granted?” Anderton said coldly.

“I know about the precog mutants. You’ve managed to go back in time & redo key crime scenes before it happens,” said Witwer.

“Yes, the basic legalistic drawback to precrime methodology—that being the crime had actually already happened—is thus avoided since quantum time-travel gets us ahead of the criminal event.”

“But surely it will happen—it’s just waiting to happen by the time you get there, right?”

“Yes, Mr. Witwer. But our society is full of crime waiting to happen—despite the best psyops, there’s no way of stopping it.”

“Especially if the psyops people are the ones doing it.”

“Precisely. Unfortunately it has to happen first—before we can go in for any precrime prevention measures. Timing is everything.”

“I’m no analytical wizard, but there’s lots of paradoxes involved it seems to me. The detention camps are full of would-be criminals. And then, all the new time lines possibly triggered by your astute interventions?”

“That’s where all these computer banks & equipment come in, like the alt.welt hologram,” says Anderton cautiously.

“The precogs help us as human data-receptors backing-up & predicting what the new time-line will be like after our precrime intervention. They’re beyond & ahead of the computers that simply study & evaluate these alt.welt scenarios. The precogs see thru & beyond the precrime maze of options—into the postcrime future.”

“Precrimes/postcrimes. Speaking of precogs—here they are. We normal human beings need the hologram to see the future—or we have to actually take the Tesla Time Machine back into time. The precogs are already there—they live inside synchronicity. All Time tenses are simultaneous for them—they live in a continuous present. Like a telepathic gang of idiot savants or child-idiots.”

“Geez, everything synchs. Even the fruitcakes. Yet they’re all so young.”

The screens are folding into themselves—projections of the hologram fractoids are coming in from the wired precogs & quantum jumpers. The screens are mental touch-screens—some think for themselves.

Suddenly the screens are telescoping & resolving themselves around one particular 4-D coordinate. Down here in the underground bunker, the lighting gets dim as the emergency lighting kicks in—a dull red light permeates the passageways. Something is happening—something is coming down…

All the young precogs are directing their attention to one particular scene—all the analytical equipment & recording prophecy video-cameras are humming. All the personnel are turning their attention to the esp-deformation scene—fractalizing on the multiple-screens before Anderton & Witwer.

“What about Mars, Anderton?” Witwer breezily says, glancing at the action. The Mars shots have all disappeared. The Face, the Pyramid, the Egypto-images of New Cydonia…

“Mars can wait a little bit,” Anderton says. “A major precrime felony evasion is taking place. It involves actual murder & treason. We’ve been able to postpone it until an opera booth after the war. The culprits have a chance to commit the crime—we want to know who they are & the chances of morphing it the next time.”

The screens are dim & grainy—it’s back in the mid-1800’s. Something illegitimate is ahead—yet something else of tremendous social value is happening simultaneously, perhaps dwarfing & postponing the criminal event later on.

“Just see what happens,” says Anderton. “There he is—shambling thru the crowd. A pair of over-sized shoes. Dazed. Our chrononaut-kid.”

Anderton feels the quickness of his voice—wishing he were young again. His conversation breaks off, his voice tightening.

Precrime Commissioner John A. Anderton knows the kid—it’s his son.

“Where’s this happening?” Witwer whispers. “When?”

Posted by pugetopolis at 3:33 AM