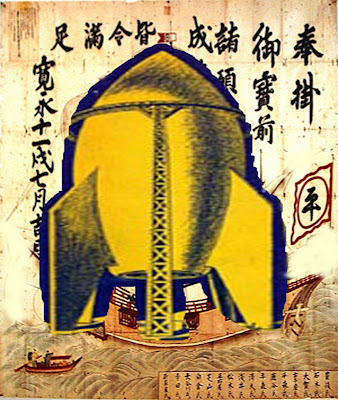 With the restoration of Imperial Rule, the interplanetary foreign affairs and trade of the New Japan Empire was monopolized by the Exxon Solar shogunate, yielding a huge profit in terms of oil, energy, gold, silver and other heavy metal mining developments of the Asteroid belt and Saturn’s rings.

But what was happening behind scenes—during that fateful Late BP Tokugawa shogun period? An unanticipated and rather complex “Space Opera” scenario was materializing for the Exxon leadership and intelligentsia.

Something quite unexpected was coming down with the advent of something totally new: unforseen interstellar foreign trade. The visits of the Sirius ships from Canis major were at first the main vector of extra-solar interstellar trade exchanges—followed by the additional influx of various “Vandals of the Void” types of decadent Vega-Los-Vegas casino planet tourists from the constellation Lyra.

These criminal and hoodlum-type Vega-Los-Vegas aliens were seeking new leisurely entertainment venues and vices for their con-artist business opportunities. They were curious about the new Exxon dynasty and wanted make business deals and contractual enhancements with TPTB to extend their gambling Empire.

Terran artistic-cultural enhancements had become stylishly in vogue and somewhat soup du jour for their already ancient and highly advanced decadent stellar civilization. The Vega-Los-Vegas mob had class and quickly made connections with the various still thriving Yakuza chivalrous organizations on Titan and elsewhere.

Aldebaran sex-slave mutants from the constellation Taurus had already made contact with puzzled Pluto colonists on the fringes and outskirts the Exxon Shogun solar system. These sophisticated androids were survivors of an ancient still unknown mega-world—lounging somewhere in their strange invisible 4th dimension world known as Miami Vice Prime.

One particularly powerful species of these preternatural alien intelligences came from the ruined world of “Ronald McDonald”—a long-dead alien clown civilization based on a 4th dimensional substance called the “organic id.”

Monsters of this strange interdimensional “id-force” were known as “Clowns from Outer Space”—and it was this Clown “id-force” that was picked up by a Titan teenage clairvoyante youth named Val van Vogt.

Van Vogt was a young Slan survivor from Planet Earth—one of the few American telepaths to make a safe exit from the BP Texas headquarters before the Apocalypto Disco End. He was taken in by the Exxon intelligentsia who soon realized the boy’s psychic economic potential for the new shogunate.

Little did they know what would happen. Virtually singlehandedly, young van Vogt did a narrative intervention at just the right time which virtually restructured the dominant paradigms of interstellar shogun time travel. It was similar to an obscure historical literary shift of consciousness known as the “Golden Age of Science Fiction”—a sudden short burst of energy between the ‘30s and the ‘50s on Earth which took traditional SF pulp fiction into a totally new dimension.

It was this telepathic linguisitcs shift which attracted the Clowns from Outer Space to the doorsteps of this Slan kid living on Titan. Unlike the hard-science aesthetic ideologies of the previous Late Tokugawa BP shogunate—the Exxon shogunate literary intelligentsia (thanks to this idiot savant boy van Vogt) skirted the typical old-fashioned Romantic and high modernist cliché thought patterns of the previous pulp fiction interplanetary genre paradigms for time travel. And proceeded to go where no BP executive had even thought possible.

In fact, he showed the Clowns from Outer Space a trick or two. This total lack of any narrative intelligibility cannot be read as Exxon Shogunate naivete however—in the sense that the alien Other dialectic couldn’t be “conceptualized” by Exxon execs or even remotely “understood” through typical Terran canonization effects.

The Exxon Shogunates were smart cookies. They had to be to overcome their rivals—the BP mob. It’s precisely simply because of this cunning total lack of canon dominance—that a few new sub-literary conventions and lack of any intense “literary” effects made a new canonization of the Other possible.

Time travel, then, ended up being based on the most garish and vulgar kinds of Shogun junk and Japanese paraliterature—taking off in unexpected new directions every hentai-manga-anime moment.

Grasping the 4th dimensional image-thought process of the young Slan telepath Val van Vogt otherwise is hopelessly impossible—especially if one tries to “contain” this new yet ancient narrative style in a manageable straight literary prose operation.

Chicken-cooping a neo-narrative a coup d'état such as this is, well, somewhat difficult. See “Reflections of A. E. Van Vogt” (Titan Press, 2075, pp. 78-79) In that sense, the “irrational”and subjective “id-force” had a way of defusing and marginalizing most forms of privileged censorship.

Something that tragically the original surrealist Earth movement misconceived—a stunning and depressing historical irony for the preeminent anti-aesthetic vanguard Western avant-garde. It failed at despising itself—and not aiming for Literature as a radical transformation of daily life.

While van Vogt quite naturally flowed with the narrative of his own virtual dreaming—the logic of his fantasy, the unconscious free association and projection of his sheer adolescent campy imagination was what attracted the Clowns from Outer Space to him in the first place.

Sometimes some rogue Betelgeuse or inquisitive Alpha Orionis entity slipped out of mysterious same-time timewarp blackhole deepspace regions—to peek in at what was going on at the Ronald McDonald asteroid orbiting invisibly around the Slan kid’s Titan homebase.

Rumors of alien involvement back on Earth beneath Poughkeepsie were thoroughly investigated by PPI and the New York Times. From 2068 onward, Planet Japan, as the former Saturn moon Titan had become known as, started to participate actively in foreign intergalactic trade with not only the quixotic Space Clowns but with their allies the Zeta Zombies.

The adolescent ambassador for this foreign trade and cultural exchange was, of course, none other than the Slan youth himself. What fools they were to believe in him. By 2070, an embassy and trade mission under Captain Hasekura Tsunenaga got involved with the whole mysterious 4th dimension Others thing.

It was Tsunenaga’s kept boy—who supposedly was permitted by the Others to come & go through an intergalactic “glory hole” time-portal across the vast light-years abyss of the great space-time expanse known as the Sargasso Void. The Sargasso Void was so powerful that it crushed the highly advanced Japanese-built space galleon San Juan Bautista flatter than a pancake.

After 2080 and the introduction of the Space Seclusion Act and the banning of all Taser weapons, the only inbound extra-humanoid ships allowed were mostly from the Vega-Los-Vegas casino home planet. The popular cloned born-again “Liberace-Elvis the Pelvis” android daimyo handled all the business-angle comings & goings from then on. Thanks to specially-designed Heinlein-drive spaceships catering to bored extraterrestrials and other wealthy important alien tourisimo.

The fact is that “Earthboyz are easy”—got around the local decadent galactic in-crowd rather quickly. So that pretty soon—cute Yakuza Slan rough-trade numbers were much in demand.

Posted by pugetopolis at 1:10 PM