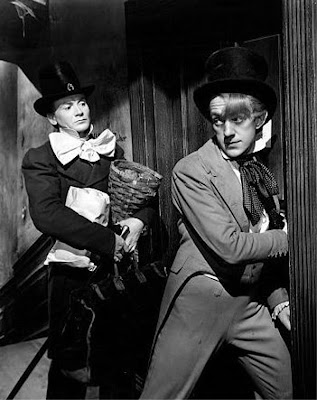 Herbert Pockets was such a fag—I simply couldn’t believe it. A foppish London fag—and my first lover there in that much-overrated faggy, foggy metropolis by the Thames.

“Dear me!” said Herbert, wrestling with the door. While I stood there in the hallway, holding the paper-bags and groceries.

“Such a sticky wicket!” he said, laughing to himself.

We’d just got back from shopping at Covent Garden Market and having a couple of drinks at Barnard’s Inn.

We’d met there in the tavern—by a prearranged rendezvous made by Miss Havisham and Mr. Jaggers for my first day in London.

“Dear me! This goddamned door—I’ll just have to kick it down one of these days.”

He shoved and kicked it—fought with it like a caged beast. I’d never heard such a nelly fag—curse and carry on that way.

We’d met at the tavern—earlier like I said. It was the most amazing thing—when we first met. Talk about hilarious déjà vu—mixed with the most ironic laughter and sense of recognition.

There was no doubt about it—I’d recognize that face no matter what. Herbert Pocket, it turned out—was the young pale gentleman I had a fight with in Miss Havisham’s overgrown garden.

It was a mock fight—since Herbert was as much a boxer or fighter as a powder-puff. He was so nelly and fem—I didn’t really want to hit the poor thing. He provoked me though—slapping me arrogantly on the face and butting his head into my stomach.

I had to defend myself—I had no idea that both Miss Havisham and Estella were observing it all from a window high above the courtyard. It was like a scene in a play—but only a mock play with two fools.

It was all so staged and then quickly covered up—by a kiss from Estella. As if I’d somehow I’d won the chivalrous chance to be her fiancée—her chicken champion who deserved a peck on the cheek.

And later on who’d be rewarded—under the staircase. With long, prolonged and extended pretty shocking blow jobs—that made the card games we’d play for Miss Havisham seem like child’s play.

But there we were meeting again at Bernard’s Inn—just across the street from Herbert’s dumpy little apartment. Standing there both of us laughing—at who the other was. For both of us were in on the same secret—we gossiped about it like a pair of old queens.

“Yes, my dear Pip. You see we were both set up by Miss Havisham to be—how should I put it? Engaged? Betrothed? Affianced to the beautiful young Estella?”

“Both of us?” I said. “Surely you were much more the type for Estella. After all you were the pale young gentlemen—surely you were the choice pick. You had all the correct manners—and poise of a gentleman. Who was I? A mere blacksmith’s apprentice…”

Herbert flipped his wrist and laughed. “Yes, my dear Pip. Miss Havisham fancied me as the object of her nefarious evil plans. And she was the one that set us up to fight each other in that weedy old courtyard outside her dumpy old mansion.”

I looked at this Herbert fellow—with bulging, ogling eyes. I’d never met such a loquacious human being—who dealt with such murky things in my past with such ease and debonair nonchalance. Surely he was the type of cultured gentleman—that Estella respected and most certainly deserved.

“But Pip, don’t you see, my dear boy?” said Herbert, tidying up his makeup and coiffure in the little pocket mirror he carried around in his purse.

“I was much too nelly for Estella or Miss Havisham’s nefarious plans. They both had the most evil, conniving, cynical minds concerning us—we the members of the poor male species. We were the ones—who they blamed for everything. Especially Miss Havisham’s being stood-up by her bridegroom-to-be that fateful despicable wedding day of hers.”

“And you, my dear boy,” said Herbert Pocket. “You were much more butch and boyish than little faggy me, dontchaknow. You had all the hurt and pride all stored up inside—just waiting to be had and had again and again. You were like most young males—so very tender and vulnerable. So willing to be had—and your heart so easily broken.”

I looked at Herbert—as if for the first time. He was no longer just a foppish fag—no longer the pale young gentleman who deserved uppity Estella so much more than me.

Nelly Herbert was quite the lucky young man—because he was nelly and totally incapable of being completely 100% masculine and all-male. Not butchy and naïvely dumb—like some stupid nincompoop child idiot like me.

“Dear me,” Herbert laughed. “It’s quite a story isn’t it? But we’ll save it for dinner time—for a delightful aperitif.”

“But in the meantime,” Herbert said. “May I take the liberty of asking you a question? How did you come there that day?”

I told him—and he was very attentive to the very end. When I told him who or what Estella really was—and how much my feelings were hurt to have been used that way.

And then he burst out laughing—and asked me if I were still broken-hearted by it all. I didn’t ask him—if he too had been snookered under the staircase like I’d been had.

Obviously he hadn’t been attracted to the ersatz Estella like I’d been enamored by her/him—that’s why Estella and Miss Havisham didn’t take him on as their plaything like a cat does a mouse.

I’d been the perfect mouse—to be tortured and played with endlessly. I even had been looking forward to it each and every time—until the inevitable denouement plunged me down into the worst pits of despair.

It was just as bad and yet just as thrilling to me—that whole experience with Estella under the staircase in that old crumbling mansion. As that time in the spooky churchyard cemetery—when Magwitch loomed out from among the graves and got me good against one of the gravestones.

Magwitch was a young dangerous convict—on the run. He was desperate and hungry—hungry for love not just food. He ravished me like a rag-doll—turning me upside-down and getting me off. While down below—stuffing me senseless with his huge gangster Godzilla tool. After that—Estella was just a piece of cake.
Posted by pugetopolis at 9:49 PM