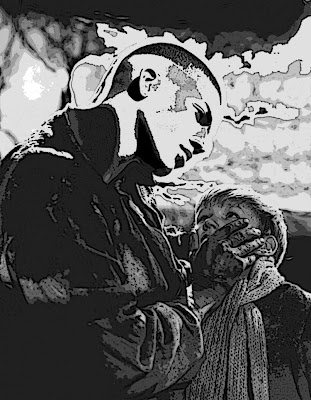 There’s something about sex and graveyards—that still turns me on. How can I describe it—that rough trade thing that happened to me?

That first time Magwitch got me—in the spooky churchyard. That cloudy, moody day—when I fainted and was reborn. I had the most vivid experience—out there in that marsh country graveyard.

Everything coming inside me—and everything turning me inside out. The feeling of being on a roller-coaster ride—going down faster and faster. And then zooming up—shooting upward even faster and faster. Until things derailed completely—and I sailed off into the moody manly sky…

I was such an easy trick—easily had by the likes of young savage Magwitch as well as subtle scheming Estella. I couldn’t help myself—I was such a naïve, young vulnerable Pumblechook Pinhead. So easily had—and had again & again. I didn’t really much fight it though—it was kinda nice being had by somebody who seemed to want me pretty bad.

Out there in the windy graveyard—where my mother and father were buried. My brothers and sisters—all lined up in neat little graves. Down by the river—the winding river twenty miles from the sea. That’s where I came to visit regularly—since living with Joe Gargery and his shrewish wife was such a drag. I’d come to the churchyard not to worship—but rather to hide like the orphan I was and would always be.

It was the perfect place to hideaway—bleak and overgrown with nettles. That forgotten churchyard—out in the middle of nowhere. And beyond it—the dark flat wilderness beyond the abandoned churchyard. The marshland intersected with dykes and mounds—with gates and rotting fences.

The low leaden sky—beyond the river. The distant savage lair—that was the sea. Outta it rushing the salty breezes and winds of the ancient omniscient ocean. And me just a miserable little bundle—of shivering shadows and shadowy fears. Me growing up afraid of it all—and beginning to cry.

It was suddenly young moody Magwitch—looming up from behind the graves. It was sullen teenage Magwitch who grabbed me—and shook some sense into me. It was shameless dirty-minded Magwitch—who got me up against a tall leaning gravestone and made me forget about everything else.

Handsome young runaway Magwitch—holding a knife to my throat. Whispering in my ear—that he’d slit my neck and drink the blood. And that he’d cut something else off—if I dared to scream for help. For Magwitch was the devil—of the deep blue sea. And he couldn’t wait—to get himself inside of me.

Magnificent manly Magwitch—was a desperate young man. A fearful phantom from another world—the world of thieves, murderers and mean rapacious rapists. He had cold gray eyes—and a broken nose. He had no hat—and only ragged pants to wear.

He wore a great iron on his leg—and he stunk like the dead. His face was smothered in mud—his knees bloody from seashells & his feet cut by stones. He limped and shivered—like a petulant Hunchback of Notre Dame. Except the hump was between his legs—and he stuck the ugly thing right in my face.

He had nettles in his hair—and briars in his pubes. He glowered and growled at me—letting me see how sharp his pointy incisors were. He seized me by the hair—and bit me hard on my skinny neck. My jugular wiggled—but my dick wiggled even more. I grabbed him tightly—like my last chance in the whole wide world. My last chance to finally feel some love—even love in a graveyard up against a cold granite stone.

I buried my face and all my small bundles of shivers and fears—about me being afraid of it all. Out there on the marshes—the dark flat wilderness of love. Magwitch must have sensed it—the way my blood was rushing through me so fast. Like the wind in the willows—roaring in from the sea. Past all the dykes and mounds and gates—the low leaden sky oozing through me.

I wasn’t Pip any longer—poor little Pip the orphan boy all alone. I was the wind rushing through the churchyard—from twenty miles out to sea. I wasn’t Pip the lonely kid from nowhere—feeling sorry for myself and wanting to hug somebody close. And there he suddenly was—moody Magwitch the convict boy on the run. Desperate for love—even more desperate than me.

The howling wind made liars of everything and everybody—even the dearly departed dead down in their graves. Lost in the lairs of that other dark sea—the dark underground Styxian Sea of you and me. Nothing comes back—after shipwrecks and Titanic luxury liners sink down into its depths. I grabbed hold of Magwitch tightly—like he was my lifeline throwing himself out to save me.

Magwitch stuck his big thick tongue—halfway down my throat. He pulled my hair—and yanked it back. Banging my head against the gravestone—of some long dead and gone grand dame of Dis. When I whispered in his ear—“Beat me, burn me, f*ck m to death. That’s when he got serious—and I felt shooting stars and comets coming outta me.

If only David Lean was there—it would have made a pretty good opening shot for a movie. The churchyard scene—with its quick appearance of Abel Magwitch. And me plunging into the mix of things—getting ravaged beneath the disapproving steeple and spire of shame. Worse than Lawrence of Arabia—getting screwed by the Caliph of Baghdad
What a magnificent film noir sleazy flick it would’ve made—with manly Magwitch of the moody moors, the male marshes of macho manliness, the ravishing river racing madly deep inside me and the cumly, white-capped sea foaming on Magwitch’s big pouty puffy lips?

Doesn’t the name “Magwitch”—simply say it all? Doesn’t it remind one of something supernatural and witchlike—as natural as the wind in the dead tree branches overlooking the ghostly graveyard with its living dead? Me dead to the world—squeezed by Magwitch’s muscular strong arms. The arms of a savage rapist doing what he did best—but ending up so delicately whimpering my name?

The same with Miss Havisham—surely I’ll end up like her some day. Having my own little Pity Parties for myself in my ancient dark old mansion—lamenting the gone days of wine and roses lost like runny pearls before swine.

My porcine snout still alert and quivering—still feeling so cute and piggly-wiggly even though my blue rinse reveals all. Surely it would take David Lean and Charles Dickens—years of work together on some magnificent Midnight Show film script. To show what really happened—in that scary, moody scene of Chapter One in “Gay Expectations.” Magwitch and me—getting down in the churchyard. Or Chapter Twenty-Two there in London—with me camping it up with Alec Guinness and Jude Law?

Sometimes when I’m watching some classic like “Great Expectations” (1946)—I’ll relax and take a toke from my boyfriend’s hookah. The movie will go on as usual—but I’ll end up living out some campy scene in some alternate movie inside my mind.

Rarely does it happen—that such a movie would be better than the one I’m actually watching. And the chances are one in a million—that my “Gay Expectations” fantasy would be equal or better than something Charles Dickens would write. I’d hesitate even more than I’m hesitating now—jotting down this failed Sat Night Live fantasy of mine for others to read.

Except that Magwitch has just come home—from working out at Gold’s Gym. And he’s stretched out on the sofa—sipping a nice cold beer looking up at the ceiling.

With his bulging arms curled up around his thick muscular neck—exposing his nice sweaty hairy armpits for my indecent liberties. His otherworldly male pheromones—far exceeding any gay expectations I could ever conjure up.

“Magwitch, oh Magwitch,” I tell him over & over again. Just like I did that first time—with him banging his head against the tombstone. Raising the dead—with his huge boner. He couldn’t help it—losing it that way. And neither could I, my dear—neither could I…
Posted by pugetopolis at 12:09 AM