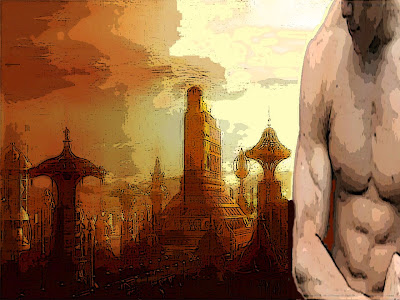 "Doppelbanger—A person who
has sexual intercourse with
someone that looks identical
to them but is not related."
—Urban Dictionary

A Penal Planet is a prison planet or colony world used to exile planetary riffraff and separate them from the general solar system populace by placing them in a remote location, often a moon or distant faraway planet.

Although the term used to be used in referring to a correctional facility located in a remote location it is now more commonly used to refer to an elegant biological solution to the problem rather than troublesome communities of prisoners overseen by expensive wardens or governors having absolute authority.

Historically penal planets have often been used for penal labor in economically underdeveloped worlds in faraway colonial territories, and on a far larger scale than merely just prison farms like back on Earth. In practice such penal colonies were little more than cruel, inhuman, slave communities.

A much wiser and more just correctional solution does not exile repeat offenders to prison farms or penal factories where work is considered punishment. Rather prisoners are exiled to pleasure planets rather than punishment worlds—since this is a much more humane and economical way of dealing with incorrigible problem prisoners and rampant recidivism.

Pleasure rather than pain? How is this kind of behavioral modification accomplished, one may ask? The solution is actually quite simple—thanks to advances in transplant technology and reverse genetic engineering the pleasure principle works much better at behavioral modification than the use of pain and punishment and it's more effective as well.

During the highly advanced “doppelbanger” process—the bodies and memory of the prisoners undergo an intense genital-genetic modification and physical transformation as they're transplanted into a new biological entity that directly models itself identically to their mental state and duplicates it along android-cyborg-robotic lines related to their sociopathic behavioral profile.

Once the “doppelbanger” process is completed—the prisoners are totally and completely on their own. Very much like the famous Kurt Russell, Lee Van Cleef, Ernest Borgnine movie “Escape from New York” (1981).

In that Carpenter's classic, Kurt Russell plays the immortal “Snake Plissken,” New York has become a prison state, and the president has just crash landed there. Enter “Snake Plissken.” Freshly captured and about to be incarcerated in New York, he must save the President from the clutches of Isaac Hayes in order to regain his freedom. It's all great stuff and you can't stop watching as "Snake" fights his way from one famous landmark to another (he even has to wrestle Ox Baker).

The difference being that on Metaluna the Penal Planet—everybody is turned into a “Snake Plissken.” Thanks to the wonders of quickie stem-cell industrial research—all prisoners undergo the painless “doppelbanger” process and get to enjoy all the pleasures of sexual intercourse whenever they want it and as much as their new "Snake Plissken" body desires. This shift from pain inducement to a pleasure principle reward system—has proven exquisitely successful on other Metaluna prison planets and seems to work perfectly.

After undergoing the reverse genetic engineering process, all male Metalunans end up actually identical with “Snake Plissken's” virile, strong, brave, muscular, veiny Penis Body. They become exemplars of the Hoodlum Male Ideal. They become sinewy, sex-starved, single-minded Snake-like “Dobbelgangers” on the prowl—and the ensuing phallic-enhanced male bonding amongst the gang-banging male minions is truly a shocking, shameless Anaconda horror movie to be seen.
.
The Metaluna penis prison regime is often extremely muy macho and haughtinly harsh—sometimes including severe S&M physical pain and pleasures. But even if prisoners are sentenced for the rest of their natural lives to Metaluna, none of them will ever remember anything about their previous criminal existences, records or rap-sheets.
.
That’s because all the prisoners have become Primal Penises walking around on two legs—primal doppelbangers surgically attached to their young Frankenstein, Nexus-Class, Android Hosts. There's a built-in termination timeline like in Philip K. Dick's "Blade Runner" so that the fun and games last only for so many years. Metaluna has plenty of room for more Null-A Players as well as various and sundry dissidents and sexual psychopaths.
.
Without their genetically co-designed cyborgian feet, legs, arms and legs—the doppelbangers would die from hunger, disease, medical neglect, excessive pleasure-seeking, or during a random gangbang riot. These android hosts are designed to last the lifetime of the prisoners in their new Machiavellian penis-incarnations.

Each prisoner knows only that’s he’s a “Snake Priskin” on the prowl. All memory traces of pastlife prison time or infamous infractions—are erased and forgotten so as not to interfere with the constant stream-of-dick-consciousness that pervades the primitive thinking process of every prisoner on Metaluna.
.
In these Metaluna penis prisons or penal colony systems, prisoners are sent far away to prevent escape and to discourage returning after their sentence expires. Penis colonies are meant to be addictive and completely compulsive as far as thinking, feeling, socializing and being oneself is concerned. They’re often located in beautiful hospitable frontier zone worlds, where their shameless, uncalled for, over-sexed labors of love—can be overlooked by the rest of the Metropolis universe.

Penis Planets like Metaluna are cheap to maintain—much cheaper than most normal run of the mill Breeder worlds. In fact, some sociopathic people (especially the poor, following a similar social logic as can be seen by those domestically "employed" in various industries, assembly plants, sweat-houses, and poorhouse worlds who like boat people sneak into Metaluna penis planets because of the underground gangster allure and sexual excitement rampant on such succulent worlds.
.
Penis Planets have a long ingloriously profane history—although on Earth pain more than pleasure usually was the driving force. France sent criminals to tropical penal colonies including Louisiana in the early eighteenth century and dumpy "hell-holes" such as Devil’s Island in French Guiana. New Caledonia in Melanesia received dissidents like Communards as well as convicted criminals. In Ecuador, the Island of San Cristobal in the Galapagos Archipelago was used as a penal colony.

Both Imperial Russia and the Soviet used Siberia as a penal colony for criminals and dissidents. Though geographically contiguous with heartland Russia, Siberia provided both remoteness and a harsh climage. In 1857, a penal colony was established on the island of Sakhalin. The Gulag and its tsarist predecessor, the katorga system, provided slave-type penal labor to develop forestry, logging and industries, construction enterprises, as well as highways and railroads across Siberia.