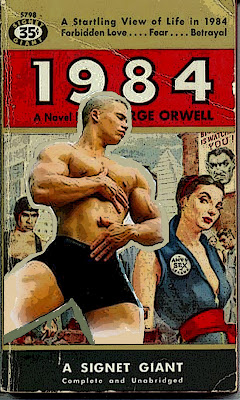 http://www.youtube.com/watch?v=BBkclTpheVs&feature=related
“A cephalopedalis.
Well. How nice.”
—Philip K. Dick,
Proposed Sequel to The
Man in the High Castle

The autopilot of the R-15 Messerschmitt rocket bleeped—as he reached his destination, Albany, New York.

It was the morning of August 5, 1956. Reichsmarshal Herman Göring had flown north from the big Luftwaffe base in Miami—for an emergency conference with Canaris and Fritz Sacher.

Bormann had finally kicked the bucket down in his bunker—and as usual Berlin was in the coup mode going on for the next Leader. As usual it brought out the worst in the Fourth Reich elite—testing Hitler’s theory of survival of the fittest.

At the top of the dunghill was Reichsführer SS Reinhardt Heydrich—always the lady in waiting rather than the new bride. He chaffed and pouted in the Reichs chancellery—keeping an eye out for the usual competition.

They were all a bunch of aging old Nazi queens now—Minister of Fear Miss Goebbels, not so young anymore Baldur von Scherach, Head of the Hitler Youth, General Rommel Military Governor of German-Occupied North America and that swine Sepp Dietrich Head of the Leibstandarte Division.

Reichsmarshal Herman Göring was determined to be the next Leader—after all his favorite Luftwaffe pilot Hanna Reitsch had just landed on Mars with her lover Leni Riefenstahl.

Hanna Reitsch was ambitious too—after all she’d flown into Berlin in her Fieseler Storch plane at the end and taken off from a makeshift airstrip on the Tiergarten with Hitler and Eva.

Later of course—von Braun had saved the day at the last moment by designing a super V-2 with an atomics payload. There went London and Moscow—and that was the end of the war. To the Axis victors went the spoils—the Japanese getting the West Coast and the Germans the East Coast.

Der Dicke (the Fat One) descended the rungs of his ship—with his gift for Fritz Sacher. Herr Doktor Sacher was an authority on Nebenwelt genetic research. It had been leaking through a time portal in the former NY governor’s mansion basement—now a laboratory for Superman reverse engineering secret developments.

The Reichsmarshal’s collection of more than a hundred genetic experiments was well-known—his hobby consisting of endless jars of uniquely deformed fetuses and unique products of medical experiments carried out by Dr. Seyss-Inquart.

Goring had brought Sacher a special gift today—a rare disgustingly obscene specimen called a Cephalopedalis. The father had been a teenage Slav harelip retard from Bucharest—and the mother a beautiful mulatto Haitian mistress from New Orleans.

“How nice,” Doktor Sacher said—slipping aside carefully the velvet cloth covering of the laboratory bottle. It was a unique Wunderkind specimen—Herr Goring had such excellent taste.

The young distorted teenage cephalopedalis had been worked on by Seyss-Inquart’s during its development in the womb and later in the Genetic Experimentation Laboratory under the Tiergarten Zoo. The wolves howled late at night—barely concealing the fiendish surgery modifications in the bunkers below.

This particular cephalopedalis had been genetically morphed—with especially virile DNA reverse engineering. So that the cephalopedalis’ head was actually a huge penis—with a couple of bulging eyeballs protruding from its gigantically grotesque erect glans.

Of course, Goring was a sizequeen like all the other nazi queen bees—and so was Doktor Sacher. They traded gift specimens in formaldehyde jars—like high school sweethearts sharing Valentine boxes of chocolate. Except these Whitman Samplers—were simply huge…

Goring and Sacher, much to the disgust of the other nazi elite, thought the Nebenwelt other side of the time portal—actually was inhabited with abnormally huge Post-Apocalypto freaks of nature. All of them the result of atomic radiation deformities—and there wasn’t a single genetic deformity that the Reichsmarshal didn’t like.

There was no genetic modification ethics panel—to monitor these fiendishly sick genetic experiments by Doktor Sacher and Dr. Seyss-Inquart. The obscene Cephalopedalis in the jar—was just the beginning of a long love affair with Freak Corps Android Boytoys. There was a huge demand for them throughout the Fourth Reich—especially on lonely Mars and Titan far out in outer space. It was just awful—awfully nice.

Some had proposed an international tribunal akin to the Helsinki human rights agreement—which would lay out the ethical obligations for such heinous nazi research participants. Others suggested staying in touch with the living Cephalopedalis specimens so they could be consulted on new projects—and because under current practices they couldn’t know about the breakthroughs based on their own DNA because many ended up in jars of formaldehyde on mansion mantelpieces of the rich and famous. Only close readers of nazi scientific journals knew about the atrocious experiments.

Courts had ruled that individuals don’t have a property right to their cells once they are taken in the course of medical care—and they have no rights, under Fourth Reich guidelines, to know how they will be used in Martian bordellos and Saturnian soldier barracks after dark.

Complicating matters was the increasing impossibility of ensuring that DNA sizequeen data could remain anonymous. Do Cephalopedalis boyz need to be told that their privacy will be violated constantly and their virginity cannot be guaranteed? Can “blanket” consent up front do the trick—or does tricking trump all the medical and legal schmaltzy bullshit as the young vulnerable harelip-pinheads with gigantic genital deformities get had every night?

Even more misleading what about the nefarious nazi researchers who won’t adequately describe the scope of their grotesque studies they have yet to design? Is it O.K. to use DNA collected for over-developed android penis research—to look for genetic associations with sub-intelligence, mental illness, racial differences?

For one thing, “we have to communicate a hell of a lot better to the nazi elite what is going on when we put our specimens up for sale on our biobanks slave blocks,” said Herr Doktor Gustav von Ashcenbach, a geneticist who runs the Laboratory of Genomic Diversity at the Berlin Institute for Health.

At issue in one particular Cephalopedalis case was whether a Transylvania Space Trooper geneticist had obtained permission from gimpy Slavic Gypsy slaves to use their finest transsexual pinhead DNA youth for anything other than finding clues to racial superiority.

All 1000 members of the Gypsy Motorcycle Club had signed a consent form stating that their sperm could be used to “study the causes of behavioral/medical disorders”—but many said they had believed they were donating it only getting Berlin prostitutes pregnant for producing transplant organs needed in the Klone Wars going on way out there on Uranus where a rebellion was taking place.

An investigation by the Genetic Gestapo had first unearthed then covered up the fact that 1000 brand new BMW motorcycles had been used to bribe the gang into the genetics labs—where they were drained dry of every drop of their seminal juicy brainstems and suffered wetdream comas ever since at extraordinarily high rates.

When the Gypsy Motorcycle Club members learned years later that the DNA samples had been used to investigate things they found objectionable—naturally or perhaps rather unnaturally, they felt betrayed. Researchers had investigated genes thought to be associated with psychosexual violence, homicidal humping and sexy schizophrenia—conditions the Gypsy Club considered stigmatizing, tracing the Gypsies ancestral origins to Asia, contradicting traditional stories holding that the Gypsies had originated in the Grand Canyon.

Doktor Schwarzenegger the infamous Sacramento Sex Change Surgeon—said he sympathized with the position of Doktor Sacher and Seyss-Inquart , the nazi geneticist who had overseen the Gypsy research at Transylvania State but insisted they had received consent from the dirty subjects.

Doktor Schwarzenegger noted that a similar question arose much more recently about what should be done with some 200,000 DNA samples that Fourth Reich-funded scientists had collected for studies of specific anatomical deformities of the grosser subhuman sexual Neanderthal types.

Doktor Schwarzenegger’s own laboratory, for instance, had gathered DNA from thousands of well-endowed, even super-endowed death row prisoners about to be hung for various criminal acts against the state. These well-hung prisoners didn’t give their permission for their DNA or sexual organs to be used in studying transplant cosmetic surgery for rich Italian playboys looking for a thrill to reinvigorate their fading La Dolce Vita nights chasing young German beauties vacationing from boring Berlin.

Should these ripe risqué organs and DNA samples be made available in a public database—so other Reich funded researchers could use them for additional studies? After all, they were collected at considerable scientific expense. On the other hand, what if the well-hung patients disliked the purposes their organs or DNA was going to be used for?

“What if someone decides to use them to look for a gene for extreme well-endowedness?” Doktor Schwarzenegger said. “They might be pretty surprised to learn that their naturally-born male equipage had made millions of dollars in sex toy profits. Of course the well-endowed dead tell no tales—but surely their relatives are entitled to a cut of the action.”

Most likely relatives would never find out. (The Gypsy motorcycle club members learned of the research Sacher and Seyss-Inquart had done only because another professor at the university had spilled the beans to the gossip rag Reich Enquirer about the black market wheeling and dealings that had been going on surreptitiously during lewd sex parties out on the pleasure ship cruises of Saturn’s sinful rings. Biker members became aware of it.) And that’s how the First Klone War began—over penile royalties not being paid by rich glitzy tourisimo creeps who liked it big, dumb and dangerous.

But what if they did find out? It happened in Texas, when a newspaper report tipped parents off to the fact that tasty DNA drops of you know what—that babypaste stuff that makes newborn offspring possible—had been found screening DWI reformatory custodians out on the highways during routine traffic stops.

The clandestine creamy lips were smeared with the stuff—and naturally the hospitals started greedily screening the DNA primal cream in state laboratories. Which was a legally mandated practice—that staved off car accidents and venereal disease to save lives. The juicy evidence ended up being stored—and made available to Cephalopedalis cognoscenti and Dairy Queen connoisseurs and scientists for even more skanky research.

It didn’t help to learn from another newspaper report, after the Reich settled the case, that some of the samples had been provided to a database used by the SS and Luftwaffe to improve the interpretation of fascist forensic DNA racial purity testing.

“I’m not much of a conspiracy theorist,” said Ms. Mengele. “I would have laughed if someone said the Reich has a multimillion-person DNA database and they’re sending samples to the blood-stained offices of Reichsführer SS Reinhardt Heydrich."
.
Unfortunately, the Reich’s resulting decision to supposedly destroy the samples, legal advocates say, was a loss for science that could have been prevented.

Except for one thing—the DNA database was not destroyed. The result was—the Cephalopedalis Wars.
_______________