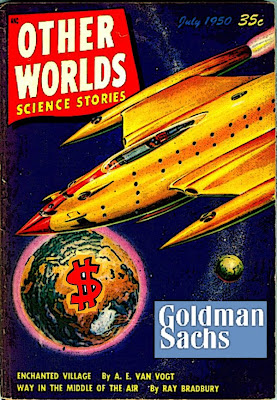 There was an audible gasp in the boardrooms across the Big Apple and in the corridors of power in the Beltway—when the leader of the pirates announced, “We are doing God’s work. We work for Lloyd Blankfein.”

The pirate, a cute Johnny Depp look-alike with a golden ring through his ear and an emerald tit-ring glowing in the studio spotlights, said he earned a bonus of $48 million in Neptunian dubloons last year.

Elaborating on the nature of the Saturnian Pirates’ work for Goldman, the bold pirate flexed his bulging biceps with their lewd “$” sign chartreuse tattoo—explaining that the pirates forcibly attacked spaceships that Goldman had already shorted.
.
“We were functioning as investment bankers, only every day was casual Friday,” the rough trade pirate said with a wink.
.
The young swarthy pirate acknowledged that they merged their operations with Goldman in late 2008 to take advantage of the more relaxed regulations governing bankers as opposed to pirates—“plus to get our share of the bailout money.”

In the aftermath of the shocking revelations, Solar System Union prosecutors were scrambling to see if they still had a case against the outrageous Saturnian pirates—who were now being treated with kid gloves to get more damning insider information on the banker jet set.

“There are lots of old piracy laws of the high seas that could bring these guys down if they were, in fact, Saturnian pirates,” one rather coy Uranian effete source said. “But if they’re bankers now, my dear, our hands are tied.”

Posted by pugetopolis at 9:52 PM