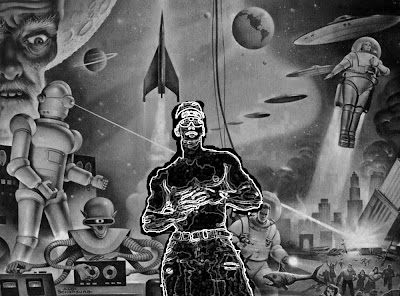 “There are, by now—
many science fictions”
—Thomas M. Disch,
“Dick’s First Novel,”
On SF

I suppose Disch is right—now is the time for many science fictions. But for me now—entering Modern Maturity like the decrepit, aging Baby Boomer that I am, well, what can I say?

I’d rather not sound too saccharine or Saturnian maudlin-esque—too melancholy or mushy Martian about my so-called bildungsroman boyhood. After all, I was a rather haughty, headstrong little juvenile delinquent back then.

Back then I was stuck in Teenage Trouble on Titan—I felt like I was Marooned on Moody Mars. Back then I had Eric North’s The Ant Men in my pants—and Jack Vance’s Vandals of the Void were some cute numbers in the showers of my crummy gym class.

Back then is when I lit up—and took a toke Rocket to Luna every chance I got. And then I’d sit in class with my eyes closed—Raymond Jones’ Planet of Light dancing behind my eyelids.

It was just awful—I was going nowhere fast. You know, like Lester Del Rey’s Rockets to Nowhere. It was a time for jizzy jouissance—Jean Genet sucking off Lucien Sénémaud. One of my buddies was the young hoodlum of Cannes—hanging around bored like me by the murky bay of Suquet.

It was a time of being extremely bored—and constantly getting loaded after school. Hanging around the Secret of the Martian Moons—getting Ronnie off in his bedroom. With his sister in the bunkbed above us—ogling down at what I was doing to her cute brother down there.

It was a time for thin-waisted Zombies of the Stratosphere—a time when everyday was scary like the endpapers designed by Alex Schomburg. Back when crummy little Sputnik was beeping away up there in orbit—while I picked my toenails and played with myself in bed at night.

I remember reading Mists of Dawn by Chad Oliver—and taking a time trip back to the strange prehistoric dawn of man. Getting it on with a Neanderthal boy—who had the most primitive gawd-awful taste in the whole world. Worse than Armando—at Azteca.

I didn’t go for Rocket Jockey adventures—or Heinlein’s butchy Space Cadet. I liked Lester del Rey’s Battle on Mercury much better—getting it on with Bryce Walton’s mermaid-boy Sons of the Ocean Deeps.

Kenneth Fagg’s Attack from Atlantis—was kinda faggy but it gave me goosebumps in the showers. When I thought about Philip Latham’s Missing Men of Saturn—I swore none of mine would get away.

I didn’t have time—for The Year After Tomorrow. Alan Nourse’s Trouble on Titan—was the only kind of trouble I was looking for. There’s nothing like giving a guy a rim-job—beneath the beautiful rings of Saturn.

Who need Rockets Through Space—when every day back then was Raymond Jones’ The Year When Stardust Fell. The Secret of the Ninth Planet was mine all mine—and sullen Ben Bova’s nine inches was The Star Conqueror I was looking for bad.