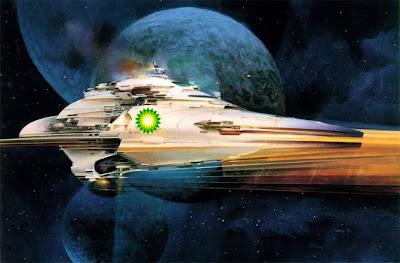 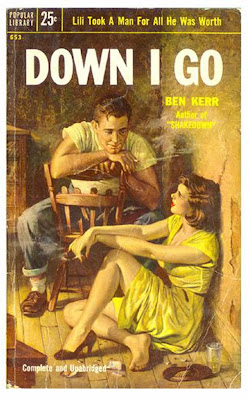 Down I Go
By Ben Kerr
Author of “Shakedown”

He was such a nice kid—so naïve, so stupid. Just the right type—to go down, down, down.

He was just some young guy out in the sticks—like Kansas maybe. Know what I mean—the farmer’s daughter type? You drive up one day—out there for no reason. Some dumpy little gas-station—in Nowheresville.

On your way back to LA—through Las Vegas for kicks. Just to be on the road—on your own again. That old Route 66 feeling—Highway nostalgia.

Driving some classic—piece of heavy-metal shit. Like a funky ’59 baby-blue Cadillac—with long sleek fins. And big chrome tits in front. Feeling like a rich pimp—just for the fuck of it.

Not stuffed like a crummy sardine—in some jetplane way up there. X-rayed and sniffed by dogs—stripped naked. Elbow to elbow—next to some creep for hours.

I wanted to feel down to earth again—all the way. Like a haughty ho—the skanky type I always was. So I pulled over—to this little country gas-station.

And there he was—outta the Fifties brand new. With a retro greasy ducktail—swept back like Elvis Presley. Plus Elvis the Pelvis hips—that drove me crazy.

The kind of kid—who still washes your windshield. Who’s still naturally bored—not hyped-up crazy. The kind of dumb chicken—who knows enough. But not too much—just dumb enough where it counts.

Smart enough to know—a motel after work. Next to the closed VFW—out there by the ruins of an abandoned Snake Pit Drive-In looming nearby.

Down I go—dontchaknow? I couldn’t help myself. He was the kind of kid—I liked to drag down with me. All the way down to the bottom—and back again.

Just to feel—what it felt like back then. For as long as it took—to get to know him all the way. And myself again. Enough to make him want me—maybe a little bit more.

Out there in the spectral sticks of nowhere—that’s where nowhere really is. It’s kinda everywhere and nowhere—at the same time. It’s everywhere—when there’s no place left.

I took him—for all he was worth. And then some.

I left him with a couple of C-notes in the bedroom—back in the No Tell Motel. Loaded, passed-out—the kid drained-dry to the bone.

I drove and drove—all the way back home to LA.
Posted by pugetopolis at 12:38 AM