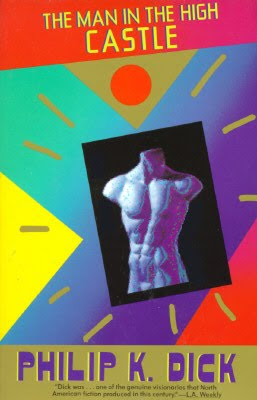 “We have entered
a moment when
we are alone…”
—Philip K. Dick,
The Man in the High Castle

“Too bad I don’t have a copy of the oracle here,” Canaris said to himself. “I could consult it—take this issue to it for its 5000 years of wisdom…”

Der Dicke had taken off quickly in his Messerschmitt—back to the safety of his Luftwaffe base in Miami. As Canaris expected, Der Dicke had sent an urgent coded message to Miami for an emergency staff meeting. The subject—Hawthorne Abendsen.

There was more to the message—Berlin had been contacted. The three best Nazi Orientalist scholars from the Reich University were to be immediately flown to Miami—for their expert advice on the Book of Changes and other important matters of state.

Canaris smiled to himself—despite Göring’s skepticism at the situation conference with the Kommandos, the news had been taken seriously by Der Dicke. Things were now moving according to plan—let Luftwaffe counterintelligence try the impossible now. Where the Army and SS had failed—perhaps the Luftwaffe could succeed. And with their success—doom themselves to oblivion.

Then Admiral Canaris recalled—there was a copy of the I Ching in the Book Lounge in the Bunker. So he made his way from the conference room, down the elevator—to the deep sprawling bunker that was his underground Navy base beneath New York City.

The Book Lounge was actually a huge electronic library—with access to the complete Fourth Reich database. There was a small lounge for the more senior intelligence staff—the old naval counterintelligence class from WWII. Canaris had seen to that—the lounge was all chrome-steel & glass furnished in elegant art deco design. A period Canaris appreciated—Egyptian moderne he called it. A sense of power—yet respect for history.

The doors hissed open—admitting him into the main level of the lounge. He was a mile beneath Manhattan—inside the heart of the beast. He took a right to another room—his personal office. There it was—inside a battered battleship-gray metal filing cabinet he kept around for nostalgic purposes. It was wrapped in a black silk scarf—along with three ancient coins.


Sitting at his desk—he began the consultation. The moment was right now—it was time to consult the oracle. It would only be a matter of time now—before both Der Dicke and Reinhardt Heydrich the SS Reichsführer were doing the same thing. It was like a Domino Effect—snaking its way slowly through the haughty hierarchy of Supermen.

Canaris opened the silk scarf and took out the three brass coins. Then he wrote the question on the back of an envelope—“How should I approach the Nebenwelt?”

The Nebenwelt Project was moving right along—now that Kohler and Seligsohn were recuperating from their memory loss. The shift from Nebenwelt had temporarily paralyzed their short-term memory—but after several weeks it returned. Yet they were changed—somehow.

Canaris cleared his mind—then he began throwing the coins. The bottom line was Six, and so was the second and then the third. The bottom trigram in K’un—the Earth. That pleased Canaris—three changing receptive lines. As deeply receptive—as the North Atlantic. His home—away from home.

Then line Four and Five—both Eights. All yin lines so far. Good lord, he thought excitedly; one more yin line and I’ve got Hexagram Two, K’un, The Receptive. The dark, yielding, receptive power of yin. The other half of Hexagram One, Ch’ien, the Creative. The four fundamental aspects of both the Creative and the Receptive—“sublime success, furthering through perseverance.”

Canaris threw the set of coins one last time—but it was a Seven. A yang at the top of the hexagram—the roof of a crumbling house. Po / Splitting Apart. A sense of deep despair came over him—he breathed deeply until he was centered again.

SPLITTING APART. It does not further one
To go anywhere.

Canaris studied the hexagram—then he looked at the chart at the end of the book and came up with what Po / Splitting Apart was turning into. It was becoming Hexagram 26—The Taming Power of the Great.

THE TAMING POWER OF THE GREAT.
Perseverance furthers.
Not eating at home brings good fortune.
It furthers one to cross the great water.

Canaris narrowed down to a single line under the Image: The way to study the past is not to confine oneself to mere knowledge of history, but application of this knowledge, to give actuality to the past.

Canaris closed the book and thought about it. No action was necessary—it was best to do nothing. Trying to aggressively approach Nebenwelt was not the proper thing to do—not at least now. Nebenelt was coming to him—letting Nebenwelt approach was better.

Being aggressive would only yield doom and destruction—let both Göring and Heydrich tread where angels fear to tread. Knowing them, Canaris said to himself, they will try to control Nebenwelt like everything else in Reich politics—by sheer naked power.

Two things had already happened—the Little Doktor’s appointment as chancellor of Germany and all German-occupied territory and the sudden cancellation of Operation Dandelion. Now the news about Nebenwelt—a parallel world to the Nazi Planet.

Canaris was skeptical. Meaningful coincidence was just not how the Reich was run—synchronicity had nothing to do with Berlin or Berchtesgarden. The astrologers were, of course, still consulted—they were the ones who lobbied the most against the Book of Changes as nothing but degenerate oriental mysticism. The astrologers were politicians—like everybody else.

Canaris shrugged his shoulders. Astrologers? Necromancers? Dreamy Orientalists? Who or what was next? The entrails of an owl? The flight of egrets across an evening sky? What was happening to the world? Their former allies the Japanese were now the enemy—Operation Dandelion would surely become a long extended Cold War now. Apparently the alternate world was similarly cursed—was the roof falling in on them too?

Canaris returned the book to the filing cabinet—somehow the Nebenwelt was connected with the oracle. The Orientalists said the book was alive—it was 5000 years old. It was aware of the Nebenwelt—it was trying to tell us something. Abendsen used the oracle for his book—The Grasshopper Lies Heavy. Canaris rubbed his eyes—he had an uneasy feeling about all this.

Next to the oracle was Abendsen’s book—Canaris kept both of them together. They had similar invisible contours—they described parallel worlds in conflict. Canaris often wondered—did he have a Double in the Nebenwelt? The Kommandos had reported his Double had been hanged—after the conspiracy against Hitler had failed. How would this effect his intelligence egress between the Führerwelt and the Nebenwelt? What had happened to Naval counterintelligence after the war in the alternate world—had it been absorbed into the Nebenwelt power elite structure?

They’d known about Nebenwelt for 18 months now—two Kommandos were back. They’d been debriefed—their short-term memories had returned. They were smart—Canaris trusted them. Professor Wolfgang Pauli had been summoned from Norway—to explain the physical phenomenon of synchronicity to the Naval staff.

But how does one explain something like synchronicity to a young submarine commander—or to one of the crack Luftwaffe Mars Expedition rocket pilots? Yet to get to Nebenwelt—required aleatoric acausal expertise. It was an ancient technique—it was 5000 years old.

No one knew where Abendsen was—but they had his book. A tight group of neo-nazi literary scholars had been assembled—to map out on a point-by-point comparison the differences between Abednsen’s imaginary alternate world and the actual Nebenwelt. Germanics departments around the world had been alerted—graduate students were scrambling.

Canaris was interested in having undivided control over egress—so both worlds wouldn’t bleed into each other. There were enough problems in the Führerwelt—without adding Nebenwelt Cold War politics to his list of Mission Impossible projects. Nor did he want Heydrich causing problems—nor Der Dicke. These were ambitious men—there was no Leader to hold them in check anymore. The Little Doktor was Paper Tiger—where was Speer? That suave sophisticated Architect—Hitler’s pet and his biggest disappointment. Had he defected to Nebenwelt—like Rudolf Hess?

The oracle’s advice on Po / Splitting Apart was apropos—the collapse of the Reich in one world and its victory in another was mind-boggling enough. But to contemplate a peaceful non-military enantiodromia between two such opposing worlds was almost unthinkable—how could two such diametrically-opposed worlds co-exist once they became aware of each other? How had they been split-apart in the first place—how long had they been Twin Planets spinning around the same sun?


But Canaris had other things to worry about—within his own world. The powerful Nazi factions were again reorganizing themselves—the Nazi knights reorganized the order constantly. But something was going on in the Nebenwelt—something in both worlds. Canaris was fearful—such developments only spelled trouble. Such an unfortunate encounter—would be a War of the Worlds.

It was unthinkable—yet unthinkableness was his job. Canaris had been trained to think the unthinkable—after all he was the head of Naval counterintelligence. He still believed in the Führer-Principle—but the idea of Führer-Control over another world was sheer madness.

The Nazi Mars and Moon colonies were barely functional even now—despite all the best German science and technology available. How could his world hope to prevail over a parallel world—another aggressive alternate world already hopelessly bent away from the Axis?

Captain Wegener was back at Tempelhof Airfield after his meeting with Heydrich on Prinz-Albrechstrasse. He smiled and nodded to the young lieutenant driver—so proud of his mirror-polished Daimler phaeton sedan. Just another kid from Munich—who loved driving fast on the Autobahn. The whole world opening up to him—proud of his shiny chrome Luger too.

The new R-15 Messerschmitt rocket was in the air—soon Wegener would be back in New York. Canaris came on the emergency channel—there was a tremendous amount of static.

The image of Canaris jiggled on the screen—like a nervous water-spider. Moiré patterns dimpled the bunker background image—Canaris looked grim.

The admiral chose his words carefully. “Miami has been vaporized. The whole Luftwaffe complex is gone—along with Göring and his staff. It wasn’t Heydrich or the Little Doktor. It wasn’t the Japanese either.”

Wegener leaned toward the screen. “Who did it then, Admiral?”

The image faded—then it popped back on the screen. Wegener felt himself listing eccentrically—all sense of balance gone…”

“The Nebenwelt,” Canaris said. “The Invasion has begun.”
Posted by pugetopolis at 12:02 PM