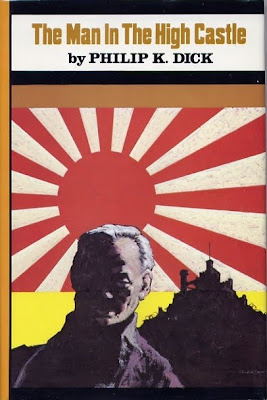 The Boy in the High Castle—Chapter Two
The Divine Invasion

“Where are they heading?”

Captain Rudolf Wegener was discussing business with Canaris in New York—the Lufthansa ME9-E rocket ship from Berlin had crash-landed in the East River. A submarine had picked up the pilot and passengers—nothing short of a miracle.

“Cheyenne Wyoming? There’s nothing there!!!”

“It must be somebody fairly important?”

“No—not him. His son Spencer.”

Wegner rubbed his eyes squinting into the darkness. Sometimes the Admiral could be more inscrutable than the Imperial Japanese Emperor himself. Inscrutable was the wrong word—he somehow wasn’t always politically correct. Poker-faced—would that be a better word for the Admiral?

“It’s Spencer they want to kidnap.”

“Who wants to kidnap him?”

“The two Kommandos—they hijacked a jet to Cheyenne.”

Wegner scanned the file on the screen. That was the good news—the bad news was that the two Kommandos were the ones who survived the Nebenwelt jump. They’d done it on their own. Without orders or permission—they’d commandeered a small Messerschmitt fighter. They were flying under the radar—soon they’d be knocking at Abendsen’s door.

Far away on the Atlantic coast—Miami and Reichs Marshal Göring didn’t exist anymore. Neither did the underground Luftwaffe base—and the huge fleet of Messerschmitt rocket ships at Cape Göring. It was like a bloodless Night of the Long Knives—even the rats in the Führer bunker beneath the Reichskanzlei were nervous. There’s nothing more mean and nasty—than Nazi internecine warfare.

“But why Admiral? A mere 16-year-old boy? According to our records, he’s just a normal American kid. Tagomi has taken him under his wing—the Imperial tutors have educated him. But surely the Kommandos don’t want to kidnap Spencer Abendsen—they’re after the boy’s father. Isn’t he the mysterious Man in the High Castle?”

The screen dimmed and there was a rush of static. The lights in the submarine went red—then back to normal.

“Besides Admiral—Abendsen is the mystery man. He’s the one who wrote The Grasshopper. He’s the Man in the High Castle—supposedly the one who knows Nebenwelt better than anybody. Yet he’s just a writer—he’s never made the jump. How could he know more about it than the Kommandos—they were the ones actually there?”

“Are you sure, Captain Wegner?”

“If the Kommandos are flying to Cheyenne—there’s a reason for it. If the Kommandos knew everything they needed to know about Nebenwelt—they wouldn’t be doing this. Any medical reports on Herr Kohler and Herr Seligsohn?”

Canaris shrugged. “Nothing abnormal or out of the ordinary. A few headaches—short-term memory intact again.”

Wegner hit the search button—scanning the de-brief files. Nothing came up about Cheyenne or Spencer Abendsen—other than data maps pinpointing the underground network beneath the suburban home. What did the Kommandos want—why didn’t they go through channels?

“Messerschmitt autopilot—it does everything,” Canaris said.

Wegner nodded—looking at his watch. They’d be in Cheyenne in an hour—secretly he admired the boldness of the two men. They were skilled and trained Kommandos—but somehow Nebenwelt had changed them. They were more aggressive—they obviously had an agenda. But whose agenda—the Fourth Reich’s or some other world? The Abwehr—or the SS? The Luftwaffe was out of the picture—it would be a much smaller world now without Der Dicke.

“There’s a young woman on the way to Abendsen’s home too—her name is Juliana Frink. She neutralized a Nazi hired killer—posing as her lover. He was assigned to kill Hawthorne Abendsen—the thug was using Frink as a foil.”

“What about the Kommandos?”

“Tedeki has permitted Frink to enter the gated community where the Abendsen family lives. Supposedly she’s a telepath—in contact with the Oracle.”

“But what about the Kommandos?”

“We’ve got the okay from Denver Control and Tedeki—to let them land and see what they do. Tedeki is as curious as we are—the same with Frau Frink. It’s wait-and-see—after all she neutralized the hired gun. There’s nothing more we can do.”

Wegner was impressed—usually the Admiral’s thinking was much more convoluted than military intelligence. But he was being much more straight-forward than usual—something else was bothering him.

“There’s a little cocktail party going on—the usual guests and acquaintances. Nothing out of the ordinary—except one thing.”

“Admiral—surely you jest. Just one thing out of the ordinary? I’m not sure of anything right now. Miami is gone—so is Paraguay. Vaporized—off the face of the earth. Some kind of multiple-theater conflict is opening up—I just don’t know enough about this Nebenwelt thing. I’m for the Kommando unit doing their thing—anything more they find out can only help us with intelligence. ”

Canaris studied Wegner’s expression—Wegner was no flat-faced steely-eyed black-shirt thug with shiny jackboots and a Waffen-SS metal or two. Wegner was Canaris’s protégé—his right-hand man and partner in crime.

“You’re right Wegner—we really don’t know anything about Nebenwelt yet. That’s why we’re letting the Kommandos fly undercover to Cheyenne—they want to meet the author of The Grasshopper.”

“You mean, of course, Hawthorne Abendsen.”

“Because Spencer Abendsen is the true author of The Grasshopper—not his father Hawthorne.”

So it was all just a ruse—to protect the boy. The father was willing to take the heat for the book—in order to hide his son from the SD. But why publish The Grasshopper in the first place—why endanger his family for a book of fiction?

Parallel worlds were beginning to open up fairly quickly—alternate realities were synchronizing on different levels. It was an unfolding process—surely Tedeki and the Abwehr had insider knowledge if anybody did.

Especially Canaris. Surely if anybody knew who was the Man in the High Castle—it was him. Seemingly always thinking ahead of events—the ultimate master spy and clever multi-tasker.