Time for the Stars 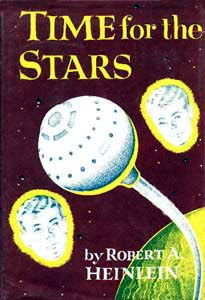 Most people are as self-centered as oysters. But long before Pat got interested in girls like Maudie, both Pat and I could telepath as easily as we could talk and just as smoothly, without special voice-coaching at any distance. We must have been doing it for years without knowing it…

When we talked with each other it went this way:

I said to Pat privately, (“What’s the silly idea? You’ve made her say ‘no’ and now she can’t back down.”)

(“Not yet she hasn’t,”) Pat answered on our private circuit. (“Don’t joggle my elbow.”)

We were talking to each other telepathically—that’s the kind of dialog that made sense even though we didn’t know that’s what we were doing. The LRF psychologists played it back for us—both Pat and I couldn’t believe it. We’d thought for all that time that we were just being secretive and sort of snarky about everything. We didn’t know what telepathy was back then—I still don’t really know what it is.

It was faster than the speed of light—that’s why the LRF wanted all of us identical twin telepaths for the torchships. But as far as Pat and I were concerned—our psi-abilities were just as much a surprise to us as our newfound three-way sexuality with Maudie.

I mention this because those early days in the LRF psych-labs changed our lives in more ways than one. Pat and I started “talking” telepathically with each other even more than before—not bothering to whisper since they had proved to us that we weren’t hearing the whispers. We were hearing telepathic dialog—we just didn’t know it that’s all. Only we could hear it.

But we both kept subvocalizing the words silently—since it helped us understand each other better. Early that summer, we’d both tried to do without words and read minds directly—but it didn’t work that way. We learned to not listen to each other unless the other had “spoken” to us—I did it that way and so did Pat.

When we talked we used words and sentences like anybody else—there wasn’t any of that fantastic, impossible nonsense about instantly grasping the contents of another person’s mind; we simply talked. One thing that bothered me though—was why Pat’s telepathic “voice” sounded like his real voice. It hadn’t worried me much when I didn’t know what we were doing—but once I realized that “words” were different than the other things I heard, well, it bothered me.

I began listening to Pat—when we weren’t talking or when we weren’t around each other. Sometimes I’d listen to him in the shower—when he’d be thinking about Maudie. Other times I’d be a voyeur and listen to him—when he dated her at the movies or necked with her at Lover’s Lane. Sometimes I even got more perverted and got inside his head—listening to the young animal noises he made when he was making it with Maude in the backseat.

Pat was a show-off though. He knew I was listening—he was an incorrigible alpha-male vain exhibitionist. He let me listen in on the action—I couldn’t help myself. Maudie was originally my girlfriend—but he took her away from me. He and I were identical twins—but he had more male hormones than me. Either that or he was just more selfish and self-centered than me. He laughed at my obsession with his sex-life—he called it having a “three-way” romance.

So that when Pat had an orgasm—it wasn’t me having the orgasm. I wasn’t watching through his eyes or feeling her up or making love to Maudie like he was—it was my twin saying to me telepathically the words running through his brain that he knew how to use to describe what he was feeling. Words were handles for his feelings like—(“Ugh!!!”) and (“Oh, baby!!!”) and (“Take it, Maudie… I’m coming!!!”) There wasn’t any privacy—between telepathic identical twins.

So I no longer worried about it—I got into it. Pat didn’t seem to mind—he liked the idea of doing a telepathic three-way. I could hear Pat’s voice get clearer and clearer—I could hear the edge of his voice when he was getting ready to shoot his brains out. Maudie got self-conscious thinking that both of us could read her mind—especially when she lost it or got into doing what she did so well orally. Pat was oblivious to all that—it was obvious I was the only telepath tuned into his sex-life and he liked to dominate things with both him and Maudie. Her body—and my mind.

Pat was a telepathic fascist pig—and just because he was cute and twice as endowed as me wasn’t any excuse for torturing both Maudie and me that way. (“What did I tell you?”) Pat would say afterwards. (“She likes my bod—that’s all that matters to her.”) (“Shut up,”) I told him. (“I don’t wanna listen.”) And then he’d say things like—(“Aw, c’mon Tommy, you know you like it too—you only wish you had 12 inches to play around with, hmm kido?”)

Which really got me mad. Why did Pat always think that he was more important than me—that he was supremely important for some reason. He always had this grand purpose for himself—subverting me to groveling at his feet. Just because he had a bigger penis than me—that didn’t mean anything. We were both telepathic identical twins—exactly the same in every which way. Except that one thing—his big telepathic cock. (“It’s the one doing all the talking,”) he’d say. (“It wasn’t me doing all the bragging—it was Bozo.”)

Which really wasn’t very funny—even though both Maudie and I somehow were caught up with that perverse possibility. If she got married to Pat like he said he wanted to—and if she became pregnant and had kids like most newly-wed couples do, then whatever genetic trait that made identical twins telepathic would probably be passed to their kids. In Pat’s case it was the completely probable DNA possibility that his sons would be just as well-endowed as him—both telepathically and sexually. That’s why the LRF encouraged them to get married and have kids—to continue whatever Mother Nature had already endowed Pat with so generously.

Me too, I suppose, although the LRF people probably figured like I figured—that the dominate male for their long range Project Lebesraum would be the chosen one for the torchship voyage to find living breathing viable planets for the anticipated population explosion moving into the twenty-first century. All of which turned out to be pure baloney—with the more modern terra-forming technologies later adapted for Luna, Mars and the mining operations on the rings of Saturn.

There was plenty of “time” and “space” within our very own solar system—without sending a dozen sub-light spaceships out to explore the closest star systems. That was one of the great misconceptions of the whole LRF dreamboat fantasy project—but nevertheless guys like Pat were preferable to do the otherworld exploratory work rather than me.

I’d stay Earthside—and handle the inbound telepathic messages that came in as the torchships boosted from Earth-zero up to light-speed then coasted back down to normal for the pin-prick on the starmaps chosen for the moiling earthy masses. But not before Pat had a chance to leave behind a pregnant Maudie to populate the next generation of telepathic offspring for whatever was going to happen next—and for however long it was going to take to get there. Which he did getting Maudie pregnant—giving me a telepathic nephew and then a telepathic grand-nephew down the line.

There were even other eugenic hush-hush rendezvous love-affairs planned for Pat—with some of the other female telepathic twins to cross-breed the genetic chances of Pat leaving behind some more clairvoyant offspring to take up the slack of Earthside telepaths who’d naturally supposedly age faster than those going the speed of light.

At least that was the theory behind the Twin Paradox—a special relativity thought experiment by the French scientist Paul Langevin in which a twin who makes a journey into space in a high-speed rocket will return home to find he has aged less than his identical twin who stayed on Earth.

All of which sounds pseudo-avantgarde and fuzzy-brained now—but the idea was you can send radio messages back from a ship light-years away traveling just under the speed of light. But even if you assumed that a ship could carry a power plant big enough to punch radio messages across light-years (which was pretty much impossible in terms of modern engineering at the time)—even so, what use were messages which travel just barely faster than the ship that sends them? The ship would be home almost as quickly—as any report she could send, even by radio.

So the LRF proposed sending out a dozen starships in all directions to explore Earth-type planets—and sending back messages with telepathic twins. The messages would be instantaneous—faster than the speed of light. And that way there could be communications between starships themselves as well as with the earth—doing the utterly impossible contrary to the known laws of physics. Whatever telepathy was—it had something to do with how consciousness was more than just physical.

All this was going on while he was nailing Maudie every night before the launch of the torchship Lewis and Clark. To tell you the truth, I was glad Pat was chosen for the trip and not me. I was glad that all the telepathic masturbatory and autoerotic texts running through my head would stop—and I could get going with my own life. They’d keep him busy onboard the torchship—and his messages to me would be strictly business that’s all.

I was beginning to feel continually in motion—perpetually turning back in on myself and yet swinging out into Zambinella Land. This whole LRF thing was rendering any dualistic distinction between Pat and me unnecessary—I was neither Sarrasine nor Zambinella but rather some kind of false distinction and both were reading out in all directions neither heads nor tails.

Telepathy implies a radical textual politics—a different kind of representation. I was becoming an intransitive verb—not texting something but rather simply texting. I was becoming marginalized by Pat—a pluralized text of telepathic messages. His sexuality was taking a central role in my life—anybody doing a biography or critique of our dialog would surely end up thinking I no longer existed.

The LRF psychologists called it—telepathic twin psychosomatic dialogic eccentricity. But to me it was like becoming just another footnote to Pat’s marvelously fascinating S/Z moviestar life as a LRP lovechild. I felt like just a mere footnote in the margin of Pat’s life—rapidly devolving into a bunch of subsections, quotations, prefaces, marginailia and other pluralized pusilanimous pomposities.