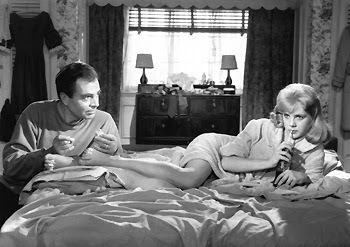 A secret not divulged by Vladimir Nabokov in his scandalous “Lolita” is that the beautiful nubile Lolita possessed a simply huge monstrous big toe.

It was different from other parts of her dainty adolescent body—just ask bug-eyed ogling Professor James Mason. The delectable scene in which Mason is applying nail polish to each of Lolita’s exquisite tiny winy little pinkies had to be filmed with a young actress “extra” bit-player so as not to detract the lovely moviegoers from the pure decadence of the bedroom scene.

The burlesque values and extreme seductiveness of Lolita’s aloof and haughty teenage beauty would have been confused by the most bourgeois absurd misunderstandings that would surely spoil their exalted cinematic expectations, for example, if both Mason and the astute movie audience had seen a huge grotesque big toe leering at them. Naturally they’d prefer the most elegant and correct form of the human female pretty toe to be portrayed in all its sacrilegious charm up there on the Silver Screen.

Even supposing that Lolita’s big toe was perfectly pretty, if indeed the big toe were monstrously large and deformed, then it would surely have distracted all concerned with the possibility that Lolita’s little big toe was actually as large as the stinking foot of some big ugly proletarian thug. Not that that would have stopped James Mason who was just as aggressive as the Count of Villamediana when it came to doing anything to be able to touch Queen Elizabeth’s royal big toe.

Quite the contrary, since for all we know James Mason and the Count of Villamediana may indeed have been afflicted by the classic size queen foot fetishism for the seductive enormous big toe which is known to be condemned by pure and superficial men even more than dainty ones.

The form of the big toe isn’t specifically monstrous; in this respect it’s no different from other parts of the male or female anatomy such as the inside of a gaping toothless mouth or the rude ignominy of a rather monstrous perky phallus. These two radically opposing kinds of seductiveness habitually confuse movie goers and so the daintier the better as far as exceptional deformation is concerned for the box office.

The spiritual attitude of the human race toward the laughable big toe can be explained by how much people laugh when somebody falls on their ass in the mud. Distancing oneself from one’s terrestrial baseness and earthly existence surely makes the big toe’s life psychologically difficult—analogous to the brutal fall of man in the Garden of Eden.

A large toe reminds most people of the arrogance of man when one finds oneself spread-eagled in the mud or having slipped on a banana peal. Mankind willingly imagines himself to be like the god Neptune, sailing the sea with majesty amidst the bellowing waves and incessant erections and buffeting vicissitudes of not only the earth but also the less than grand, obscure baseness of his all-too-human hominid naked ape body.

Perhaps out of humility and vulnerable shyness, the big toe is discretely hidden from sight to keep dignity free from all the other perceptible frenzies and bloody palpitations of the human body? This obsession with modesty perhaps little by little has crept up the calf, the ankle and the foot—up the thigh, into the groin where even greater hilarity awaits even more than imagining the various and sundry aberrations of the big toe?

Big toes perhaps remind one of animal stupor and base idiocy—but then when did that ever stop Professor Humbert Humbert? The vicissitudes of the big toe require a progressive refinement of modesty as James Mason so perceptibly demonstrates as he gives Lolita her daily pedicure and toenail polish treatment. He spoils her just as she spoils him—if only Shelley Winters knew what was traversing so many innumerable times there in her kitschy Mexican schlocky bedroom…

Posted by pugetopolis at 4:56 PM