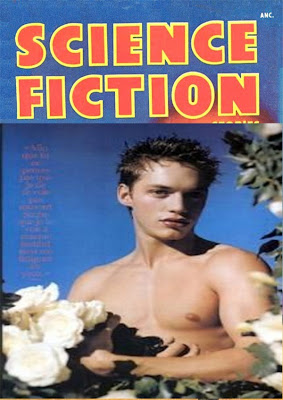 “I don’t like to be around
twins, they make me
think I’m seeing double.”
—Robert Heinlein,
Time for the Stars

—an ode to juvie sci-fi

the thing about twins and heinlein's time for the stars—it’s a schizo-fragmented fictional text full of flatness and depth-loneliness, full of the twin's double angst, the loss of their individuality and personal style, the replacement by doppelganger pastiche of one’s sense of history and future memory

transcending modernist styles, all the jargon, badges and other decorations lost to schizo-frag collage stream of consciousness, hysterical alienation, otherness surpassing our power to represent it, the stigmata of late cyberpunk, posmodernism and late capitalism

—it emerged in the late forties & fifties

emerging for me with robert heinlein's space cadet (1948) and red planet mars (1949) & time for the stars (1956), citizen of the galaxy (1957), have spacesuit will travel (1958), some of the best juvie sci-fi ever written, a style exuding assurance, savvy and slang, casualness, clever understatement, charm, smoothness free of jargon, seeming to come from a place where things were actually coming from, concealing considerable narrative craft and genuine characters from worlds of tomorrow

one of the great failures—

of sciencefictional imagination, the inability to envision the juvie imagination of the future and what the leisure-classes might do to avoid boredom—from four-dimensional chess to dabbling in xeno-archeology, protagonists entertaining themselves with time travel, shape-shifting, gender-morphing

juvie sci-fi not knowing its limits—

paradoxically its highest aspiration the sense of wonder often found in paperback pulp fiction, the diamond in the junkyard debris, the perfect clarity of “juvie jouissance” first experienced by adolescent imagination usually dismissed as youthful illusion, but still interfused with the sense of sci-fi sublime and childhood’s end, hidden adroitly by vandals of the void, there beyond the furthest reaches of neptune, the nostalgia for planetary paradigm shifts, bordering on lost senses of juvenile sci-fi, understated by twin adolescent telepathy, modeled after heinlein’s time for the stars, the twin brothers, one consciousness, “prison-yard whisper,” joined together on “automatic pilot,” their futural rite of passage to the stars, their initiation ceremony and their growing-up pains beyond the beyond

the reading of juvie sci-fi texts—

the sense of wonder inspired through parataxis paradigm shifts, variants of conceptual breakthroughs, telepathic dialog faster than the speed of light, time between the stars, the time between juvie then & now, created by the writer to give readers back then a glimpse of themselves with no further authorial aid—other than the pages of an ace paperback double-novel to guide them