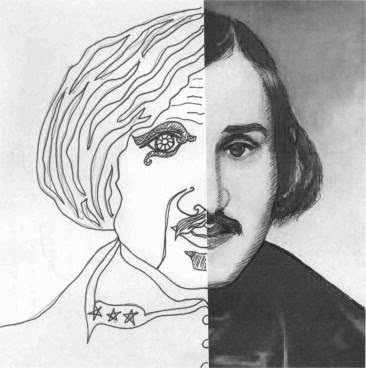 “A most extraordinary thing
happened in Petersburg on
the twenty-fifth of March.”
—Nikolay Vasilievich Gogol,
The Nose

There was something queer about the quiche. It was fresh, smelled delicious and went wonderfully well with a nice hot cup of coffee in the morning. It was such a pleasant way to wake up being served breakfast in bed—despite my bitchy roommate’s bad attitude. Little did I anticipate the extraordinary thing that would happen to me that morning—something that began with a nice big fat slice of quiche. It was an exquisitely nice piece of quiche—but little did I know it would turn out to be the queerest piece of quiche I’d ever have. It would indeed change my life that fateful morning I was having breakfast in bed.

I was no Marlene Dietrich prima donna—I was merely a lowly masseur and my roommate was a barber. We owned a little barber shop with a whirlpool Jacuzzi and massage parlor in back. My roommate, Demitri, was a lush and came from a long line of vodka drunks. It’s a wonder he didn’t cut the ears off our customers—the way he gave haircuts drunker than a skunk. He was an excellent cook though and quiche was one of his most successful dishes.

Demitri served me a nice huge slice of his homemade quiche and we both had a leisurely wake-up session for the busy day ahead. My massages were very popular around town—I came from a long line of masseurs. A sign in the window depicted a naked body being kneaded by strong hands—with the inscription “Treat yourself today to some pure relaxation.”

Getting down to the serious business of enjoying my nice breakfast in bed while reading the morning paper—I picked up my fork and sliced into the warm quiche. I tasted the first bite with the gusto of a hungry queen getting ready for another day of doing what I did best—massaging my clientele of prominent citizens not only with a nice massage but also with a dip in the Jacuzzi to warm up their tired tense muscles.

To my amazement there on my plate was something rather big and white and wiggling—sticking out the side of my slice of quiche. I prodded it carefully with my fork and felt it with my finger. It actually moved and I swear it looked right at me.

“Hey!!!” it said—“What the hell you think you’re doing you imbecile?”

Demitri and I were stunned—we sat there looking at my slice of quiche. Then I reached down and pulled it out—it was a Prick!!!!

We were both dumbfounded—how did a Prick get inside our quiche? How absolutely queer—how utterly strange. It was a Prick all right—and a familiar one at that. It belonged to the Mayor—surely he’d want it back!!

“Scoundrel!!!” the Prick said. “You fucking faggot—it’s all your fault. You almost cut me with that knife—you almost sliced me with that fork!!

Demitri and I looked at each other—it was indeed a Prick. But not just a normal Prick—it was a Prick that could talk!! And obviously a powerful Prick too—after all it belonged to the Mayor of Zitville!!!

I didn’t know what to do—I’d never been in such a terrible situation. Demitri wanted to spray it with Mace—then dump it in the dumpster out back in the alley. Surely that would be unbecoming though—for such an important and powerful Prick as this one?

“Maybe we should call the Mayor?” I said, gulping down my coffee. Demitri was already fixing himself a vodka cocktail to calm his frayed nerves. Didn’t he give the Mayor a haircut and shave the other day? How could this awful thing have happened?

Then suddenly the Prick wiggled out of my hand and scuttled out the door without even saying goodbye. I turned to Demitri and said “Fuck it. I’m not going to work today. I’m going to get drunk with you and try to forget what I just saw now. It’s hopefully going back home anyway—to the great relief of the Mayor probably.”

Meanwhile across town in the Mayor’s palatial mansion—all was not well. The Mayor woke up as usual for his important day—but he immediately sensed something was wrong. He looked in the mirror—his Nose was still there. For some reason he thought it might be gone—that it had flown the coop during his sleep. A Mayor needed a Nose of course—to conduct official business with poise and decorum.

Not only that, the Mayor hadn’t woken up as a Cockroach—that’s how he usually woke up in the morning. He’d wake up like Gregor Samsa did—looking up at the ceiling with his six little skinny legs wiggling helplessly. His beetle-like carapace keeping him on his back in bed—there was nothing he could do except wiggle his antennae. After awhile the Mayor would become himself again—he’d wake up and get on with business.

Then while putting on his pants, the Mayor to his horror discovered the awful truth. The most important organ of his body—besides his large official Nose—was no longer attached to his body!! He looked under the bed and peered into the closet. He called his assistants and they searched everywhere—but nowhere could they find the Mayor’s Prick.

Everybody knows that all bureaucrats are Pricks—aggressive, pushy, vindictive, ambitious Pricks. There’s nothing worse than Big City Politics—it’s a fish-tank of sharks and bottom-fish. The Mayor was a vain Prick—the biggest Prick in town. He lorded over everybody with his big Prick—and everybody bowed and genuflected before the magnificence of His Royal Immensity. Without his big Prick though—the Mayor would surely be out of business.

The Prick was next seen on FOX TV—during an interview with Mister O’Reilly. It blew the whistle on the Mayor’s dirty dealings and revealed all the dirty laundry in town—it was truly a Deep Throat crisis and the more the Prick squealed on the Mayor the worse all the other Pricks at City Hall looked. There’s nothing more embarrassing than a bunch of old Pricks being revealed for what they are—and as the Mayor’s Prick reminded the audience it takes one to know one. Everybody nodded knowingly— surely the Mayor’s Prick would know the truth, the whole truth and nothing but the awful truth!!!!

The Prick obviously had a mind of its own—because next it was seen in Aruba. It was lollygagging on the beach under an umbrella—with a bunch of young cute Latino Pricks shaking their mariachis and dancing for his entertainment. The Prick had a pair of sunglasses on—and was reclining on a beach-chair enjoying itself. Other tourists didn’t pay any attention—and the Prick didn’t pay any attention to them. It was all so casual and louche—the Prick was living the Life of Reilly.

All this rude behavior and gauche exhibitionism by the Prick naturally upset the Mayor—as well as everybody else in Zitville. What a shameful thing to happen—a talkative Prick getting loose and running naked as a jay bird around the world. What was the world coming to—stock in Fruit of the Loom Inc. went down precipitously. Soon the Stock Market itself had a terrible plunge—of course the Pricks blamed the Mayor’s Prick for causing all the trouble and bringing on the next Depression.

Nobody knew what to do—it was a Prickly situation. Uppity Pricks across the land were getting rambunctious and rebellious—things were getting out of hand in various little Prickvilles across the country. Pricks no longer let themselves be used and abused—the Day of the Prick had arrived. Soon young Pricks and old Pricks and big Pricks and little Pricks rose up against Prick Slavery—the outsourcing of Pricks came to a sudden stop.

Pretty soon Pricks came out of the closet—Don’t Ask Don’t Tell didn’t keep them “zipped up” anymore. In fact all zippers were outlawed and exiled—and circumcision came to a screeching halt. It became politically correct to be uncut—Pricks with foreskins became the new fashion models setting chic trends for the Prick Industry. Pierced Pricks became popular—and Prick Lit became a major part of the modern university curricula. “In Pricks We Trust” became the new national motto emblazoned on the dollar bill—stamped proudly on all the little fake silver coins. “Oh Say Can You See That Beautiful Prick” suddenly was being sweetly sung at all the televised NFL football games across the great Land. And when the exciting races began at the Indianapolis 500 the announcer would say—“Gentlemen!!! Start you Pricks!!!!!!”

Soon Hollywood sensing a sure winner jumped on the bandwagon with—“Gone With the Prick,” “I Was a Teenage Prick,” “When Pricks Collide,” “Lord of the Pricks,” “The Prick that Challenged the World,” “I Married a Prick from Outer Space, ”An American Prick in Paris,” “Night of the Living Pricks,” “Forbidden Prick, ”Sky Prick and the World of Tomorrow,” “Planet of the Pricks,” “Prick Crazy,” “The Prick Who Came In from the Cold,” “Devil Prick from Mars,” “Prick Women,” “Touch of Prick,” “The Strange Case of Martha Prick,” “Too Late for Pricks,” “Son of Prick,” “The Invisible Prick,” etc. etc. etc.

“And to think,” I said to Demitri, “it all started with your queer quiche.”

Posted by pugetopolis at 9:18 AM