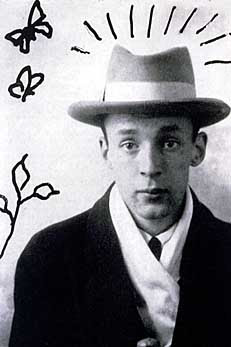 “I always call him Lewis Carroll Carroll,”
said Nabokov, “because he was the first
Humbert Humbert.”—Vladimir Nabokov,
The Annotated Lolita

The thing about Bend Sinister is that it reminds me of the fictional nature of reality. Krug takes us on a rather bumpy roller-coaster ride into Paduk parody.

It’s not really satire, criticizing dystopian reality and suggesting a better way of dealing with thugs and dictators. Rather, as Kinbote says in Pale Fire, “reality” is neither the subject nor object of literature which creates it own special reality having nothing to do with the common “reality” perceived by the communal eye.

Not even the blackest imagination could have invented our present zeitgeist—it takes a Nathanael West to define with absolute parody the inevitable dominant dark tonalities of the American comic novel. Miss Lonelyhearts and Day of the Locust—surely it’s only a matter of time before Hollywood produces new remakes of such postlust portraits. But I doubt it. Such books don’t cineplex easily.

Nabokov was the ultimate Snarke. His allusions, puns, parodies and pastiches ran through all his novels. Bend Sinister is no different. Krug is just anther Kinbote or Humbert—another protagonist, excuse me, unreliable narrator. Another chump like his other literary pals caught up in the same pretentious and philistine postlust predicament. Like Pnin and all his illustrious colleagues at Cornell and UW—smothered by the vulgarity of the American “muddlecrass” (to wax Joycean).

Postlust pals like Quilty and suburban culture-queens like Charlotte Haze—what a burlesque of narrative clichés and grotesque portraits. Such parody and pathos. Like Humbert describing that first night at the Enchanted Hunter’s Hotel:

“Parody of a hotel corridor. Parody of silence and death.”

Few readers know that Nabokov’s first published book was his Russian translation of Lewis Carroll’s Alice in Wonderland (Berlin, 1923). Some say that “Humbert Humbert” is based on “Carroll Carroll”—both had, well, similar ”interests.”

Nabokov’s fondness for verbal wordplay and “portmanteau” words (coined by Carroll) is nicely displayed on Sebastian Knight’s neat bookshelf where Alice in Wonderland and Ulysses stand side by side.