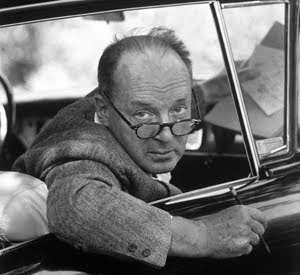 Then there’s Nikolay Gogol—another snarky author. Nabokov at Cornell gave a lecture on Gogol’s Dead Souls and “The Overcoat.” I read “The Nose.”

According to Nabokov, there’s this sudden slanting of the rational plane of life that’s accomplished in many ways and every great writer has his own method. With Gogol it was a jerk and glide—like a trap-door opening up under your feet with absurd suddenness, letting you fall through the snarky traphole.

The absurd was Gogol’s favorite muse. But you can’t put a man in an absurd situation when the whole world is absurd. There’s only a secondary contrast between a pathetic lost absurd human being—and the nightmarish, irresponsible absurd snarky world he finds himself in.

Gogol’s “The Nose” isn’t mere burlesque. The nose doesn’t quiver and shimmer as a dream does. The nose is inserted into this harmless short story in such a way that it explodes in a wild display of nightmare fireworks. It starts out in a simple rambling colloquial manner, then suddenly swerves into the irrational where it really belongs.

“The Nose” talks and then dissolves into bathos or turns into its own parody. Gogol makes fun of himself, saying something ludicrous and at the same time something sinister; something’s always snarky lurking constantly around the corner.

After reading “The Nose,” the reader’s eyes become “snarky” and “gogolized” and one sees the utter futility, futile humility and futile domination of the world that makes Gogol’s world different than Tolstoy, Pushkin or Chekhov.

Satire is a lesson, parody is a game. Satire implies a better world, some alternate to dystopia. While on the other hand, Gogol parodies the world as it “is”—a world that has no morality, no moral purpose or endeavor, no pupils or teachers, no moral lesson, or moral point. Gogol’s world simply “is”—excluding everything that might destroy it. No movement, no struggle, no nothing can change its course. It would be like trying to stop the Titanic from sinking—or impossibly trying to change the course of the planets and stars.

“The Nose” is a performance art—a kind of snarky somersault. Gogol is a Snarkette Queen—he’s a diver, the seeker for black pearls, a writer who prefers the monsters of the deep to lounging on the beach in Aruba. He doesn’t pity the underdog or curse the upperdog. He appeals to the absurdity lurking in the shadows. Only to be snarke-baited himself.

A Nabokov lecture about Gogol is also actually “performance art” and Nabokov was good at it. A student of his, Alfred Appel who later edited The Annotated Lolita, gives this description of what a magnificent snarky thespian Nabokov was:

“As a lecturer, Nabokov was a considerable Thespian, able to manipulate audiences in a similar manner. His rehearsal of Gogol’s death agonies remains in mind: how the hack doctors alternately bled him and purged him and purged him and plunged him into icy baths, Gogol so frail that his spine could be felt through his stomach, the six fat white bloodletting leeches clinging to his nose. Gogol begging to have them removed—“Please lift them, lift them, keep them away!” and sinking behind the lectern, now a tub, Nabokov for several moments was Gogol, shuddering and shivering, his hands held down by a husky attendant, his head thrown back in pain and terror, nostrils distended, eyes shut, his beseechments filling the lecture hall. Even the sea of C-minuses in the back of the room could not help being moved.”—Alfred Appel, ed. The Annotated Lolita, New York: Vintage, 1991

Intrigued after reading Nabokov’s lecture on Gogol, I read “The Nose” late one night. I couldn’t help myself—I entered into the “performance art” mode like Nabokov did. I quickly composed my own version of “The Nose.” The parody flowed and the portmanteaus scuttled along the page like the Lewis Carroll parody “The Hunting of the Snarke” that I’d been posting in the Snarke blog. I gave myself a modern Gogol “nose-job”—with leeches dangling from my Snozzola. The result being the following version of “The Nose”—entitled “Queer Quiche.”

Posted by pugetopolis at 8:44 PM

Great image of Vlad. Love Gogol and have his book on Gogol, which sheds wonderful light on Gogol's comic genius.

I saw the Nose made into a stage play here in Vilnius. The producer shared a similar dark sense of humor.