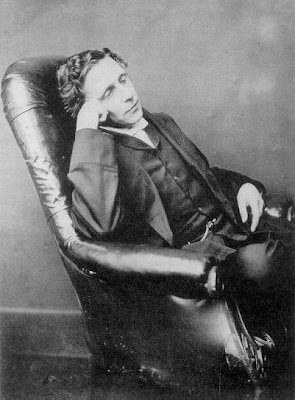 ‘Twas morning, and the slithy mob
Did gyre and gimble in the Beltway;
All mimsy were the lobbyists,
And the many Wall Street hands greedy.

“Beware the Jabbering Drudge Report
The jaws that bite, the gossipy spite!
Beware the Jujub boyz, and shun
The frumious Blue Dogs!”
He took his veto sword in hand:
Long time the manxome minons he fought—
So rested he by the Newt Gingrich Tree
And shat upon mimsy Rush Limbaugh!

And as the voters in uffish thought stood,
The Jabberwock, with greedy eyes,
Came whiffling through the tulgey banks
And burgled all the IRA’s and accounts

One, two! One, two! And through and through
The New Great Depression went snicker-snack!
All the frabjous Ponzi schemes a mischmasch
We all went galumping back in time again.

“And what happened to the Jabberwock?
It’s back again, my cheesy burbling boy!
Callooh! Callay! It’s WPA time once again!
How we all chortled with such joy!
‘Twas brilliant in a slithy kind of way—
The New York Times and Wall Street Journal
Burbling, bleating, murmuring, warbling,
Who’ll bale us out of this bubbling boiling hell?
_____________

“But searching for meaning may be beside the point. Nonsense, T. S. Eliot reminded us, is not an absence of sense but a parody of it. Some of the portmanteau words Carroll invented — chortle, burble, frabjous and others — are now fully vested members of the lexicon.”

Posted by pugetopolis at 8:53 AM