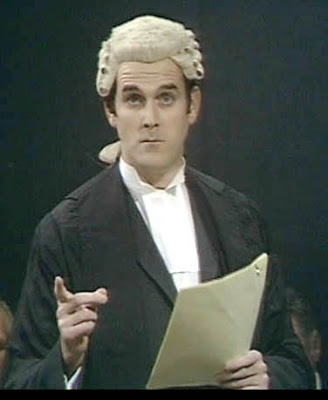 The Barrister’s Dream
—for Lewis Carroll

In the matter of bailing out bankrupt banks—
Surely the Snarkes didn’t aid and abet it!!!

But he’d never summed up anything before so—
The Snarkes undertook summary judgment instead
Summing it so well that it went far beyond—
What the Witnesses ever had said!

When the Verdict came up, the Jury declined—
As the word “Jabberwocky” was too hard to spell

So the Snarkes came up with the Verdict—
“GUILTY!” and the Jury groaned and fainted

Then the Snarkes pronounced Sentence—
The Judge being quite too nervous to utter a word
When he rose to his feet, there was silence—
Like night, not the sound of a pin could be heard

"Another Great Depression!" was the Sentence—
"And everybody gets to work for the WPA!"
The Jury all cheered although the Judge said—
He feared the Verdict wasn’t legally sound

The Judge left the Court, deeply depressed—
But the Snarkes, though a little aghast, cheered
As the hucksters to whom the hustle was entrusted—
They went on bellowing and celebrating as usual

Posted by pugetopolis at 9:48 AM