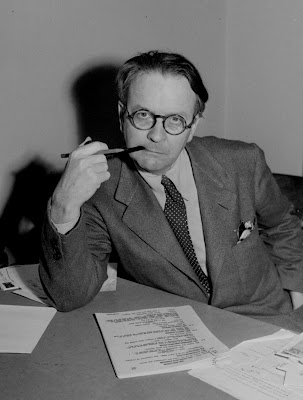 “Raymond Chandler’s writing is about two things: alcoholic depredation and deeply betrayed men—which is to say one thing from two angles.”—James McCourt, Queer Street: Rise and Fall of an American Culture, 1947-1985

1. Chandler took back the book—making reading another kind of cinema.

2. He did it like a chess problem—the most tantalizing question in chess being “Can it be played without the queen?”

3. In a small hot room in San Bernadino’s Prescott Hotel, Phillip Marlowe sitting on a bed, sweaty, stripped to the waist, eyeing a haughty no longer young Texan bellhop, propositioning him to sit and have a drink, spreading a lot of tired-looking dollar bills on the bed saying:

“How long can you stay?”

“A dollar gets you remembered in this town. You a dick?”

“You ever seen a dick playing solitaire with his own money?”

4. Another great Chandler line from The Big Sleep: “The blonde was strong with the madness of love or fear, or a mixture of both, or maybe she was just strong.”

5. As far as our Hollywood discussion is concerned, there’s this classic repartee from the late masterpiece The Long Goodbye threatening on every page the suppressed hysteria of abreaction turning into arch parody like when Terry Lennox says:

6. “I’m not sneering at sex. It’s necessary and it doesn’t have to be ugly. But it always has to be managed. Making it glamorous is a billion dollar industry, and it costs every cent of it.”

7. Chandler knew Hollywood pretty good—and Hollywood knew Chandler. No “take” in his novels is longer than an average movie shot—and no two successive takes come from the same position.

8. The typical Los Angeles put-down—“I don’t think so.” Erupting into literature—like with The Big Sleep.

9. Chandler as fatalist. “You can’t judge people by what they do; if you judge them at all it must be by what they are.” How do you do that?

10. Investigate people; pick somebody you despise: “He was living with a rich pervert, the kind that collects first editions and does fancy cooking and has a very expensive secret library behind a panel in the wall.” This is called flagrant closet-paranoia—only a hermeneutic dimwit could fail to smell the flop sweat of a guy like Chandler who loves tough guys.

And finally: Raymond Chandler and Roman Polanski: “Neurotic in hearts, sex-hungry in clubs and starving in spades.” Both superior American crime cineastes—supreme forensic investigators of the psyche. Equal to Hawthorne—intrapsychic Hitchcockian struggles in every movie scene and filmic page.
Posted by pugetopolis at 9:11 PM