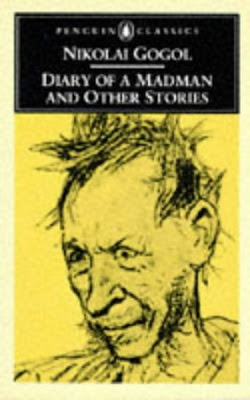 “There once was a man named Nicolai
Who thought he was a Nose, I cannot lie
Those Ruskie prevaricators
Such unreliable narrators
Autoplagiarists so very sly”

To make a long story short—I got “gogolized" by Nicolai Gogol. I couldn’t help myself after I read “The Nose”—and then I went overboard with “The Overcoat.” You can look it up on Google—the sordid story of my Gogol existence.

It started one dark and stormy night—while reading Lewis Carroll’s “The Hunting of the Snark.” Maybe it was the word “Snark” that started it all—seducing me down into the depths of Gogol’s Ogling Eyeball.

Pretty soon like Kafka’s “Metamorphosis”—I was transformed into what can only be said to be worse than a crawling Cockroach. Worse than Gogol’s Nose or Gogol’s nightmarish Overcoat. I became “gogolized” into something worse than Gregor Samsa, Akaki Akakievich or Ivan Yakovlevich.

It goes like this—ogle, ogle, snarky wave, ogle, ogle, snarky wave, fantastic climax, ogle, ogle, and then back into the chaos from which it all came from. At this subhuman level of art, literature is basically a pitiful underdog—to be cursed and reviled by all literary critics because it comes from that realm of “dark and stormy night” fantasy where ships pass each other in the foggy inky shadowy darkness of the Sea of Snarke.

Gogol was born in April Fools Day in 1809—which perhaps explains why he was so Snarky. Born under such a dismal star—no wonder he became such a well-known snarky writer of fitful fiction. Kapmist, a contemporary writer, having read a poem by Nicolai written when he was five, told his parents that the solemn urchin would be a tragic writer of genius if only he could find his Snarky muse.

The Snarky muse is a troublesome Task Mistress. Snarke Literature skirts the irrational—schmoozing with the grotesque. It sucks you into the nightmare Black Hole where even light and gravity as well as the Drudge Report and FOX-News disappear into its depths.

The superficial reader of this story—will probably see me helplessly “gogolized” by Nicolai—into a hoity-toity babbling buffoon. Solemnly denouncing the horrors of Neocon Bureaucrats, the poshlust Ponzi scams of Bankers, the poor trusting people who believed in the Stock Market. But Gogol’s Nose and The Overcoat—they’re really much more than that.

Give me the Snarky Reader—this is a tale for them.

Cynical Orwell, matter-of-fact Roth, restrained Graham Greene have had their moments of Snarky insight. When novels blur into dystopian satire—then suddenly shift into parody. As Vladimir Nabokov said—“Satire is a lesson, parody is a game.”

When Gogol tried to be like Orwell, Roth and Greene—trying to write in the literary tradition of rational satire and critical dystopian—he failed. But when the skated on the thin ice across the depths of his own private abyss—he became more then just a great Russian writer.

To skate on thin ice—means to glide over the abyss. With Gogol there’s this “jerk and glide” method—as Nabokov says in his Russian Literature lectures. You’ll be gliding along in a lyrical lullaby—then suddenly the ice breaks open like a trap-door.

Then there’s this sudden absurd free-fall down into Nothingness. But the skating continues—with different shades and degrees of absurdity. It may seem comic and quaint—but absurdity has many levels of icy stillness to skate through the night on.

To fall through the ice—to then next level of absurdity. And to keep your balance—no matter how weird the absurd abyss gets. That’s the trick of a true Absurdist—for the ice is thin and there are many irrational levels to the absurd depths.

There’s the absurdity of the hapless barber Ivan Yakovlevich who lives on Voznessensky Avenue and the plight of the Petersburg lowly civil servant Akaky Akakievich. There is no premonition—no hints of the precise date or under what circumstances the metamorphosis will take place. These things remain a mystery—for Ivan, Akaky, you and I. It may seem odd, somewhat recherché—but it would be a waste of time searching for how the absurd happens in a natural or rational way.

The truth of the matter is that we’re all perpetual titular councilors of the ninth rank—amid the fourteen ranks into which our Absurdist Service is divided—a rank as everybody knows which gets sneered at and held up to scorn by all sorts of poshlust pricks and bourgeois bureaucrats in the habit of Snarking those who can’t Snark back. Our day-to-day imagination—melds, morphs and meanders seemingly forever in the waiting room while our superiors can best be described as frigidly despotic.

Perhaps it’s best that way—being unaware of the presence of our tormentors and office politics. For we would only probably shudder when we’d perceive just how much “1984” inhumanity there is in others, how much suave sophisticated savage “Brazil” brutality lurks behind the most refined, cultural POTUS schemes and country club manners of the head clerks and TPTB.

Isn’t it better to be an Ogling Eyeball—seeing nothing but the clean lines of your own sharp-edged steel blades slicing through the moonlit ice of the night? Seeing, saying nothing but your own neat lines—tracing whatever Providence happens to send you one line at a time? Deliberately skating beneath the Petersburg gray sky—making a copy of yourself as you slip down through the icy thin surface. To the next level—the Double of who your might be next?

Gogol’s style is so simple—completely different from Tolstoy, Pushkin or Chekhov. After reading Gogol—one’s eyes become “gogolized.” One sees bits of his world—suddenly, unexpectedly. There’s a rent in the texture of things—gaps, holes, frisson-like fractures in the façade of things. An absurdly logical force holds everything together—but it’s really just thin ice.

It’s like a new Overcoat or the Emperor’s New Clothes. It’s like Humpty-Dumpy—once fallen can’t be put together again. All the king’s horses—and all the king’s men. All the beltway lobbyists—and precarious Ponzi schemes. Akaky Akakievich’s new Overcoat is just a dream—covering the utter futility, futile humility and futile domination that embodies the world. The world of thin ice—that Gogol’s style breaks through.

To perform such a writerly somersault—to gogolize oneself through the thin ice into the next level of ogling intelligence? To dive non-discursively in search of black pearls—and monsters of the Id depths? To apprehend the three-dimensionality below—beyond the flat icy surface of Flatland pulp fiction?

To de-persuade ourselves from our pseudo-physical treaties and agreements with ourselves? Is such an extravagantly entangled indulging in the contortions of our so-called rational world surrealistically possible—one might ask.

Could such a style or fashion of Akaky Akakievich’s Overcoat be actually a “taking-off” rather than “putting-on” of the cloak? Instead why not a “disrobing” by casual camp—tiptoeing through the tulips of parody?

How prodigiously powerful the usual ghost story can be—the Hollywood version of “The House on Haunted Hill.” The ingenious way Vincent Price strips away—the façade of his token marriage and the tacky accord of all his limousine-arriving “Important Person” friends.

How relevant is Gogol’s “The Overcoat” to Vincent Price’s “The House on Haunted Hill”? No more than the haunting effect of irrelevant details like the rush of “full-grown young pigs” rushing out of private Petersburg homes—or the hypnotic effect of one’s realization that Gogol’s story “The Overcoat” is a deliberate mask—that both Vincent Price and Akaky Akakievich both exist based solely on the strength of lacking a cloak or narrative or marriage.

“The Nose,” “The Overcoat” and “The House on Haunted Hill” appeals to the snarky depths of the human mind—knowing that the shadows of other worlds beneath the thin ice pass like giant nameless pike far below, soundless ships of the deep sliding through the darkness.

Posted by pugetopolis at 4:35 AM