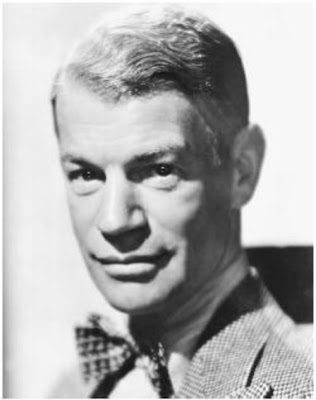 Whale: Got a name for it yet?

Whale: Bela’s at the age where beggars can’t be choosey.

Wood: I know. Grave Robbers from Outer Space. That’s the name of it. I’ve got the script ready.

Whale: Jaysus christ, Eddie. No wonder he doesn’t like it.

[Whale and Wood are sitting around the pool after lunch. Chatting and camping it up. Wood looks up to Whale—the master horror director. As usual Wood is broke; Whale is wealthy after investing wisely.]

Whale: Ernest Thesiger called the other day. He and Una are in Rome.

Whale: Ah yes, after Bride of Frankenstein they fell in love with each other. They do Rome—hustle the boys. Una gets Thesiger that rarest tidbit of Italian jailbait. You know—in the Vatican.

Wood: Thesiger has no shame. It’s a wonder you didn’t cast her as the Bride of Frankenstein.

[Whale smiles. It seems so long ago. Back when campy Ernst played mad Dr. Praetorius. Whimpering, pleading with Karloff: “Not that!!! Please not that!!! Not the Lever!!!” Exploding the whole rotten Castle of Frankenstein. Ending Miss Thesiger and her sordid monstrous dream of world dominion.]

Whale: The scene with cigars and wine down in the cemetery crypt—toasting to a future world of monsters. That was Ernst’s idea.

Wood: And that stunning entrance—Elsa as the Bride of Frankenstein! Those flourishing trumpets! With her lovely silk lace wedding dress! And her exquisite sweeping art deco wig!

Whale: Ah yes—the coiffure with lightening bolts. One of my better accomplishments.

Wood: I bet all the studio big wigs were dying with jealousy.

Whale: Of course, my dear. I didn’t want to do Bride anyway. I knew it would typecast me—the Frankenstein Curse. And it did too, didn’t it?

[Wood nods knowingly—knowing only too well that Whale’s career from then on was limited to the horror genre. The Thirties, the Forties—all the way up to its denouement with Abbott and Costello Meets Frankenstein in the early Fifties. It was a fatal love—the Bride and all her filmic reincarnations up there on the Bijou screen. Whale resented it…using his ironic sense of humor to get even.]

Wood: Something that happened to Bela Lugosi too. From Dracula on—he’d always be The Prince of Darkness. Queen of Transylvania. Evil Balkan Bad Boy…

Whale: Oh, stop, Eddie. You get so maudlin sometimes. The next thing you’ll be saying you’ve been typecast too.

Whale: I suppose so, my dear. But then after all—Glen or Glenda did rather get you started on the way to camp, kitsch and fortune.

Wood: Fortune? I’m always broke. I write the scripts. I do the directing. I do the filming. I do the special effects. I do the marketing. And yet I get paid peanuts—and when will Hollywood recognize my talent? When will I get my fame and fortune? Like you, Jimmy?

Whale: Never. It doesn’t exist. It’s all a grand illusion—I learned that during the war. When I got into acting—for the rest of us. Captured, bored, behind German lines. Drama saved me—it was drag and burlesque that got us through those captive days and nights of hidden secret desires. Camping it up—making light of our uncourageous imprisonment.

Wood: I bet you played a simply divine Juliet, my dear.

Whale: Yes, I wasn’t bashful either. I loved to show a little leg—during louche lewd scenes. “Oh wherefore art thou, my big bad Romeo bruiser? Why do you keep me waiting—here at this lonely parapet? This sad secluded balcony—beneath the lubricous lascivious moon and leering stars? Wherefore art thou—my cute Latin hunk who needs it worse than me?”

Wood: My dear, you haven’t lost the touch.

[The bunch of boy-toys lollygagging by the pool—all of them entranced in youthful wonder. Amazed whenever James Whale turned his cinematic charm on—pressing the SOS button that made the Pacific Palisades pause and hesitate. As if Norma Desmond had stepped out on the front porch of her Sunset Boulevard mansion—showing a little leg. Motioning the cute new paperboy to come into her parlor to be paid—for the excruciating monthly subscription to the LA Times. Norma and James liked chicken—the cuter the better. Both James and Norma were known to stoop to conquer—especially when it came to young athletes and ambitious aspiring actors from Hollywood High or the nearby beaches. Or UCLA or hoity-toity Stanford.]

Whale: You’re so smooth, Eddie. You know how to get what you want. A thousand for Bela. Oh Jimmy—get my checkbook will you please?

[The Pacific Palisades is beautiful—almost as beautiful as James’ pen briefly zipping across the check—making possible the presence of Bela Lugosi once again in a Edward Wood Jr. loser. Who cared though—Eddie put the make on everybody. How else could anything be done—like Jailbait money talked and baloney walked. The same with Bride of the Monster—the meatpacker’s son got the lead not because he was a good actor but because Big Daddy paid for the production. Basically because he wanted his son to be a Hollywood star—and you had to start somewhere… Even an Ed Wood movie was a movie—well, kinda. Hollywood scoffed at Ed Wood—but later generations of American moviegoers would get down on their knees and… well, praise the kitschy Queen of Camp. The one and only Diva of Hollywood Boulevard—the kinky cross-dressing Mandingo Madame of Mulholland Drive!!!]

Whale: Christ, Eddie—you’re so dizzy. You’re more dizzy than Una O’Conner. You’re always on the edge of the precipice. On the brink of fame and fortune. All that inventive snark and satire. Even if you don’t know it.

[A nude boy nods—saunters off into the beach house. He doesn’t have a name—but he makes good cocktails and hors-d-oeuvres. He makes a nice kept boy—adds some grace and charm to Amalfi Drive. David Lewis has left in a huff; Pierre Foegel the 25 year old bartender James met in a Paris dive has moved in—after Lewis moves out. Whale has fallen in love with him—even getting him a Shell station for doing what he likes to do most. Play with cars—get his greasy hands on expensive Jaguars, Cadillacs and sportcars. Kept men and boys can be expensive—but they do liven up the retirement of aging divas and directors.]

Wood: Oh thank you, Jimmy. I feel giddy. Let’s have another mint julep. To celebrate Bela’s good fortune!! I can’t wait—to being shooting!!!

Whale: Ah yes, the joys of directing. You remember that scene in Bride of Frankenstein. When Una is standing there after the Castle of Frankenstein had been blown up? Her husband has fallen through the ruins down into the subterranean crypt. Where the Frankenstein Creature still survives? Una is standing there on the precipice—the dark moody clouds are scudding by overhead. Her hair is flowing unkempt in the wind—after the terrible events of the night. She always has that slightly coo-coo look on her face—she’s that way in real life too.

Wood: Oh that scene where…

Whale: Yes, Una is standing there by this cliff—and who reaches up from the dark depths? The Creature!!! He grabs her scrawny arm. She looks down and screams. Then he grabs her scrawny neck—and with guttural growl of anger and disgust throws poor Una down into the hellish pit. One can hear her scream all the way down, bumping along the way, until her frail broken body splashes into the putrid water far down below.

[Wood nods enthusiastically—already his kitschy campy crazy mind is going to town. Thinking of how to squeeze some more Lugosi into the movie. But he had to hurry up—Lugosi was fading fast. It really didn’t make any difference what the script for Bela said—the important thing was getting “Bela Lugosi” up there on the marquee. Into the previews of coming attractions—into the publicity limelight to milk some more bucks out of the local movie houses. Bela may have been a great star back in the Thirties and Forties—but now he was merely a shadowy fading actor from another Era. Like James Whale—forever trapped in the crypt of typecast has-beens and Norma Desmond types. Always looking for the big comeback—the close-up shot at last for Mister Cecile B. DeMille there on the great descending staircase of Hollywood Fame and Fortune. It happens to the best of Hollywood Babylon—the diva die-out rate isn’t pretty.]

Whale: And then there’s Una doing her little scream routine—somehow catching a lurid glimpse of Claude Raines as The Invisible Man. As if the Invisible Man’s big you know what weren’t invisible at all—but rather the Hollywood gossip was all true.

[Claude Raines is Donkey Dong in Invisible Man—even more so in The Wolf Man. Long Chaney Jr. was always getting drunk and talking dirty about it. Smirking at how Colin Clive lost his cookies during that fatal scene in the Laboratory basement—leaning up against the stainless steel operating table after giving the Creature all that juice and voltage through the tarnished bolts in Karloff’s black and blue neck.]

Wood: I can just imagine you in angora—floating face down in your pool. Famous Angora Queen found beneath Swaying Amalfi Palms—Pacific Palisades Sugar Daddy!!! Gone like Murnau—going down on cute Philippino teenage chauffeur. Over the cliff—the Packard convertible. Murnau—not missing a drop!!

Whale: Oh stop it, Eddie. Don’t get me laughing. I’ll surely end up with a stroke—in Santa Monica or Pasadena. That’s where they put old directors—old worn-out Frankensteins and dreary queen bee blood-suckers.

Wood: Thank you, Jimmy. Let me get back to Bela right away. He wants to call it Plan 9 From Outer Space. I’ve got Vampira and Tor Johnson lined up. I’ll dedicate the film to you, dearest Jimmy.

Whale: Oh that’s okay, Eddie. I’d rather you wouldn’t though.