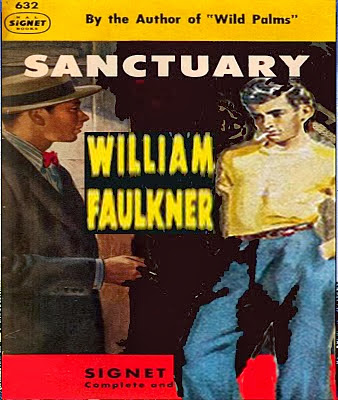 Your Mother was so very correct: Faulkner was a dirty author.

Which to me is quite interesting, probably "The Big Sleep" owes much of its queer nuances to Miss Faulkner's rendition of Miss Chandler's fag novel. So many of them were, dontchaknow. And so that's what makes some of Hollywood's classics, especially this one, so exquisitely "dirty" as your Mother would say.

I'd like to see a gay black & white film noir 40's version of "Sanctuary" or even "Absalom, Absalom" with its many faggy nuances there in the Harvard dorms between Quentin and his Canadian butchy lover with its flashbacks to the Civil War and the love-affair between the two half-brothers, Henry Sutpen and Bon the Beautiful.

Funny, that "Absalom" was the first novel we studied in John Hazard Wildman's English class, a gay professor very much like Noel Polk. It's haunted me ever since then back from back in the Sixties there in Allen Hall next to the LSU library that has "Chicken" there in the stacks.

I suppose this gay Faulkner-esque them is the reason I started my "Gay Delta Review" blog several years ago. I still get nostalgic for the Decadent Deep South down there back then. But all I have left really anymore is just some long gone gay memories.

Posted by pugetopolis at 1:52 PM