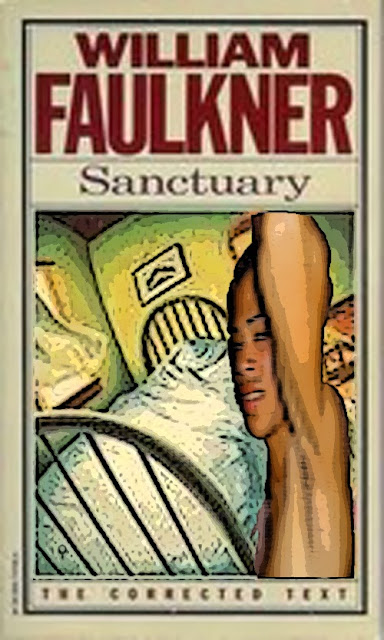 William Faulkner’s “Sanctuary,” published in 1931, is about two miserable characters who accidentally meet out in the Mississippi boondocks and end up changing each other’s lives.

In this movie version, James Franco directs and stars in the first film adaptation of a book that has long been considered unfilmable.

Horace Benbow (Tom Hanks) plays the alienated Southern attorney while Popeye (James Franco) is the gangster and bootlegger who lives in a rundown old Mississippi plantation mansion out in the swamp.

Popeye is Horace’s double—a psychological case of psychosexual inversion that grounded so many pulp fiction novels, popular psychological texts and confession magazines at the time.

Temple Drake (Helena Bonham Carter) is a spoiled young aristocratic Southern girl who gets kidnapped and cornholed up in a barn’s hayloft with a corncob by impotent Popeye who then takes her up to his bootlegging headquarters in Memphis and keeps her there captive in a dumpy whorehouse where she’s sexually abused by one of Popeye’s henchmen, Alabama Red (Olando Bloom), while Popeye gets off on the action hanging on to the brass bedposts thoroughly enjoying his trashy voyeurism and latent homosexuality there in Miss Reba’s house of ill repute.
_________________

“Popeye is at once Horace’s twin,
his alter ego, he is at once the
reductio ad absurdum of Horace’s
darker sexual impulses”—Noel Polk,
“The Space between Sanctuary,”
Intertextuality in Faulkner (Jackson:
University of Mississippi Press, 1985)

Rushing in where queens might fear to tread, Mr. Franco has accomplished something rather gauche but still quite impressive. As with “As I Lay Dying,” Mr. Franco has skinned-back or rather cornholed fairly nice and tightly the fragmented narratives of Faulkner into some fairly decent dialog and voice-overs.

As a hole, though, “Sanctuary” conveys some of Faulkner’s sordid themes, and the details of the Temple Drake story, with clarity and concision. The film is a nightmare catalog of moral depravity, lost innocence and other so-so sacrifices.

Mr. Franco captures the full force of Popeye’s corny carnality—just as he dished recently Allen Ginsberg, Hart Crane and Cormac McCarthy. It’s worth watching, not the least because it’s highly doubtful that hardly anybody of today’s Moviegoing audiences will ever read any of Faulkner or any other American author as far as that goes. Movies are in—books are out.

Posted by pugetopolis at 5:18 PM