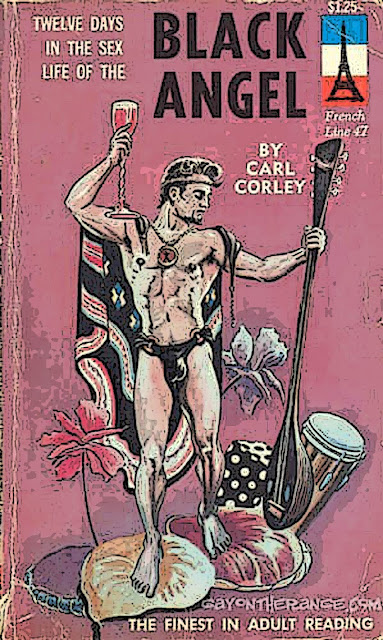 Well, dearest Melba literati—I finally got through trudging my way slowly but surely through that simply awful novel so lauded and praised by Desdemona so much lately.

I really can’t blame Barton for putting the novel down for awhile on the nightstand, because there’s really nothing quite as tiring and boring as a rambling black feminist Sheena of the Jungle S & M Melodramatic spiel as noted by The New York Times.

Yawn. It’s not that I’m a male sexist misogynist White Trash ignorant pig—some of my best friends over in the Sports Forums and Mr. X’s Political Alligator Pit are quite intelligent discreet dilettantes of the dinge queen genre of Black Literature.

Back in Baton Rouge in the Sixties when I was a rather irresponsible undergraduate at Huey P. Long’s lovely Louisiana State University—I was able to read this most stimulating gay pulp fiction classic by Carl Corley—and discuss it with my English writing professor Dr. John Hazard Wildman.

As Desdemona so lovingly noted, my academic career was rather disappointing—although Wildman encouraged me to keep on publishing no matter what.

So that there’s now in the LSU Middleton Library on campus—there in the stacks my first book of gay decadent poetry “Chicken” published by Gay Sunshine Press in 1979.

At the time there was no MFA Creative Writing Program as there is now—with the recently retiring chairperson Andrei Codrescu from New Orleans.

“The Black Angel” is a trashy Southern decadent novel that tells the racy story of the life of a handsome Bongo Boy who goes simply Hoodoo Voodoo over you know what.

The Black Angel later relocates to London where he opens the first pretend gay Tiki bar in the UK . A certain young royal personage has been known to sip a Shirley Temple Mai Tai there now and then. I shan’t tattle-tale though—the Queen wouldn’t like it.

Anyway, things were pretty much in the closet in the English Dept at LSU back then in the 1960’s. The anti-Viet Nam War protests and Hippie Movement were just beginning—and the Stonewall Riots would soon happen in 1969 in NYC after the cops raided a drag bar on the night that Judy Garland died.

I remember it well—because that day I had to show up at the Draft Board to go through a physical, get inducted and be sent off to die in the jungles of some South Asian Hellhole.

I mention this incident because it fits rather nicely into the Melba Fiction discussion of Desdemona’s Sheena of the Jungle Dinge S/M feminist Novel which some of our esteemed Melba intelligentsia have commented  and opined briefly on—although as I said, the feminist rant gets a bit boring after awhile. The same with my rendition of white trash fiction as well I suppose, but please bear with me.

As most queer cognoscenti from back then know—one of the only ways out of the Draft Board’s inquisition of college students back then if you flunked out like I would do every other semester was to check the Box.

The nefariously evil unspeakable shameful Box without a Name—was of course the place to check your little X on the spot that declared your Homosexuality. Saying you were Homo and verifying it for the Authorities was two different things though.

“Prove it,” the gruff, butchy, mean-looking Army sergeant barked at me when I meekly showed him the forms they used to send young flunked-out undergraduates off to the Jungle Gulag Archipelagos of Southeast Asia to fight, rot and die for Nixon.

Luckily I’d brought along with me none other than the beautifully handsome young black stud Tyrone Xavier Jones—who just happened to be my fervent lover there at LSU. We lived south of campus in the notorious “Tiger Town”—a niggardly student ghetto for drop-outs, druggies, whores, nascent hippies and other down & out denizens of the times.

Tyrone’s mother was the head cook of the university infirmary cafeteria—where Tyrone in his white dinner jacket served the meals to medically vulnerable students like me. I’d worried so much about my gay lifestyle and getting drafted—that my stomach was simply too upset all the time for normal meals.

So the doctors put me on a bland diet—and I moved into an off-campus dumpy cheap apartment there in Tiger Town to try and keep things going as a struggling gay writer there in the Deep South.

I turned to Tyrone and told the shocked sergeant: “This is my black lover boy and he’s really tres hot in bed. I call him “Bon the Beautiful” after Miss Faulkner’s louche novel “Absalom, Absalom”—you know the one about Henry Sutpen who falls in love with his older dinge half-brother and goes to bed with him as his roommate at Ole Miss? Well…”

Needless to say, that got me booted outta the front door by the enraged Str8t sergeant—and banned from the military for life!!! I simply wouldn’t be good for the morale of the Troops—especially horsing around in the showers and foxholes!!!

Anyway, Tyrone and I were happily married as a mixed couple for a couple of lewd semesters—even his cute younger brother Dwayne Jerome moved in and lived with us as a three-some. He was a dealer and I got some of my most seminal inspiration back then for my outré creative writing—I can still taste the tingle so tangy and lovingly touché that made my Dixie Delta tongue curl. (See my blog “Gay Delta Review” for more flashback editions of those dayz)
______________________

What more can I say—about being a miserable English Major failure back then in Allen Hall. And to think, dearest Desi, it’s been almost 50 years since back then when I was a white trash Pretender to the Throne—other than Professor Wildman, the English faculty simply detested me. I really can’t blame them—after all they banned Miss Proust, Miss Genet and Miss Ginsberg, so I was in good Exile Company one could say.

Posted by pugetopolis at 9:55 AM