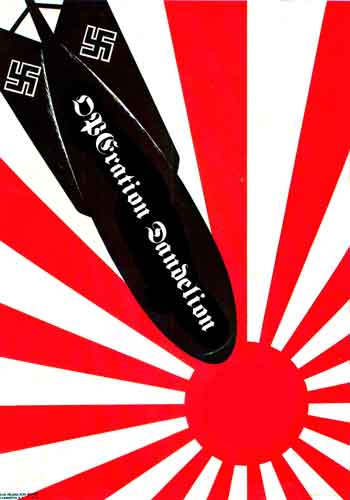 The Boy in the High Castle—
Chapter Three The Kommandos

“He knows,” the Kommando said.

The other Kommando nodded.

Both Kommandos were outside waiting in their car—as Julia drove away who knows where. Who knows what she told him—he probably knew it all already anyway. It was midnight—the neighborhood was quiet. They were on a mission—for the Nebenwelt.

“I know too much,” said Spencer Abendsen.

The night suddenly grew darker—as the Kommandos and Spencer Abendsen drew nearer & nearer to each other. All three of them were aware—of each other.

He knew it was going to happen sooner or later—now the time had come. Only Julia could have saved his son now—but where did she go? To leave Spencer—at the mercy of the Kommandos? In between here and now—and the nebulous Nebenwelt…

They were both young Kommandos—the worst. They were trained killers—genetically engineered by Dr. Seyss-Inquart with only one purpose. To be the ultimate Nazi Praetorian guards.

Seyss-Inquart designed them to guard and protect Heydrich blindly and fanatically at all costs—they were highly superior to Sepp Dietrich’s Lunar Leibstandarte Division. More than just Old Guard fanatic loyalty was needed now though.

Two of them he gave to Canaris—as a gift to the admiral.

These were the two crack Kommandos who survived the Nebenwelt jump—they were the ones who were now telepathic. The standard story was true—there was Nebenwelt. It was a parallel world—yet they needed to see the Man in the High Castle. They commandeered the fastest Messerschmitt jet to Cheyenne—the security shields let them through. Just to see Spencer—to kidnap him.

“Goodbye Spencer,” Abendsen said. He knew he would never see his son again. Caroline was sleeping—she didn’t need to know now. Later—after the Kommandos left. He’d tell her about him going—that he said goodbye for her…

It was the last thing Hawthorne Abendsen wanted to say—but he said it anyway. Sooner or later the Nebenwelt was going to tilt into their lives—he knew that. That’s what the Oracle said—that’s what the Oracle was doing. It predicted it would probably come in—sideways out of left field in Fenway Park. It did didn’t it? Over that Green Monster they called it in Boston? Except it was a reverse homerun.

Spencer was already mind-melding with the Kommandos. Without looking back at his father—he led them into the study. The automatic doors hissed open and then closed behind them. They locked. That was the last time Hawthorne saw Spencer—he dimmed the lights and sat down on the couch. It molded itself around him—trying to make him forget. It purred and vibrated—uselessly.

The Kommandos were like Heydrich’s android Waffen-SS troops—they were smart but they had one key defect. They had been genetically programmed to be both SS-Supermen—and SS-Superwomen. What made them vulnerable—was their inbuilt Nexus-pride. Spencer knew this—he smiled.

Spencer waved the screen on—there was a blackout over Miami. The orbiting spy-bots were clustering over the new anti-matter void—zeroing in on the seething zoid interference. It was like a pulse shield—phasing in and out of Nebenwelt. Miami was still there—but it was somewhere else too.

“It figures,” Spencer said, nodding at the screen.

Luftwaffe chatter was dominating the airways—without Der Dicke the chain-of-command was falling apart. Already Berlin had called Rommel out of seclusion—he was on his way to a situation conference in the Berlin bunker.

The Kommandos looked at each other surprised—Spencer obviously knew how to lock onto spy-bots and coded channels. Flat-screen Japanese tech wasn’t supposed to pick-up SS signals—somehow he’d breached the firewalls.

One could see the outlines of another city—fading in and out of the picture. Was it New Miami—or Old Miami? Probes could get in—but nothing came out. It had been that way for 24 hours—the media was reporting a minor power-failure.

Spencer slipped out of his kimono—into a jumpsuit. He was tall and wiry like his father—he had his mother’s red hair. He kept it short in a buzz-cut—like the Imperial Marines. He’d been doing weights—listening to a beautiful Brian Eno version of Yamada's Kurofune. He sat down and did some thinking—watching the screens overhead.

The Kommandos relaxed a little—they’d expected something more intense. The kid’s mind was a blank—either that or he was shielding everything. There was nothing extraordinary about Spencer Abendsen—just another teenage suburban brat.

So what if he was a talented idiot savant—there were plenty of them hanging around. Did his talents extend to the Nebenwelt?—that was the question.

Spencer concentrated on Miami—pumping up his forearms and flexing them. Usually he finished working-out—by doing laps in the pool. But there was no time for that—not now.

The two Kommandos looked at Spencer.

“You know?” the one Kommando asked.

“Yes, what do you know?” the other Kommando chimed in.

Spencer turned the channels—to Asunción. It looked like Miami—a zooidal zoid in the zeitgeist.

“Yeah sure,” the head Kommando said.

They were waiting for him to come with them.

The flat-screens—they were turning Matisse.

“You know about Nebenwelt—at least you think so.”

It was very quick—it was like a wave-interference pattern. It had blue-green sheen to it—like the moiré shield shimmering & arching over Miami and Asunción.

Then suddenly Spencer wasn’t there.

“What the fuck!!!!” the Kommandos shouted.

One of the thugs was reaching for his Luger when the other Kommando caught his wrist and held it tight. They struggled some—the cool-headed one won.

The cool-headed one was unflappable—his training was more sophisticated than his companion. They weren’t true twin clones like the rest of the Seyss-Inquart shock-trooper design. He and his companion were creative design units meant to intrigue Canaris—whose mind was like a 3-D chess game.

Marlene was the hot-blooded one—she immediately wanted to get rid of the Earth Boy. Evita was the cool-headed one—she nodded to Marlene. They dropped their identity-shields—they were two young women. Their jumpsuits slipped away—they were nude Nebenwelt identical twins.

Spencer smiled. He stretched out on the couch—showing off his invisible manly physique. He knew how to shape-shift better than them—but not all the way yet. He could only hold it for an hour or so—just enough to let them see through him for awhile. He studied them—knowing they were Nebenwelt clones. The real Kommandos were still back in the Nebenwelt Zone—being studied by the scientists.

When he shifted—he knew it was only temporary. But he wanted to know—more about these Nebenwelt clones and how they got into his presence without being detected by anybody. Apparently they’d even fooled Canaris—making it look like they were actually Kommandos. There was no way out of it. He sized up the two twin “androids”—they were his age. They looked female—they seemed real.

He knew they were fake Kommandos—he could tell the minute he opened the door. He opened the door quickly—catching them by surprise. He saw into their minds—before they could stop him. It was so quick—they didn’t even know it happened. What he saw—wasn’t what he expected.

They weren’t Kommandos—they were androids. They weren’t even human—they were some kind of shape-shift design he’d never seen before. It didn’t make any difference to him—he’d never tried doppelganger pussy anyway. But they weren’t here to fuck him to death—obviously. It had nothing to do with sex—not even the most advanced androids could experience orgasm. That he knew of. It didn’t make any difference to him—but they wanted him anyway. He needed to relax—before they kidnapped him.

He let himself go—he felt himself coming back into view. Knowing it was his last night on Earth—before the jump. No humans had ever come back—only these two fake Nexus androids. Did they still have human beings left on the other side—is that why they sent androids from the Nebenwelt?

Only androids seemed to make it through—what happened to the other Kommandos? The human ones—were they still there? Somewhere—in the Nebenwelt interzone?

Spencer timed it—he waited until he felt ready to make the big jump. He wanted to do it at just the right moment—phasing in & out with the Miami moiré patterns on the screen.

As he began phasing in & out—the fake Kommando entities disappeared.

“It figures,” Spencer said to himself.

Just as he phased out—he closed his eyes.

That’s when it happened…

For just a second—Spencer saw his Double.

The other one—on the Nebenwelt side…

Posted by pugetopolis at 2:23 PM