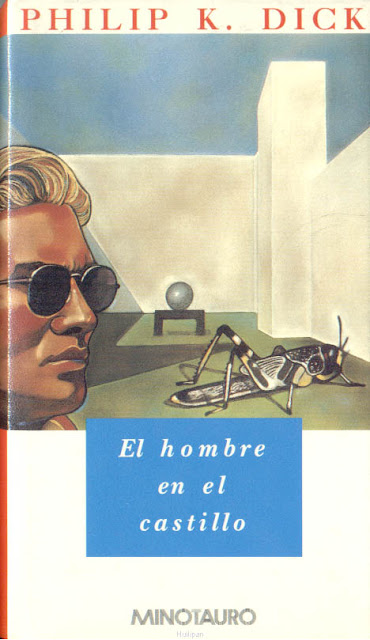 The Man in the High Castle—
Chapter Five Japantown

“[The evil days of old age come]
and one fears heights, and perils
in the street; when the almond
tree blooms, and the grasshopper
grows sluggish and the caper berry
is destroyed, because man goes to
his lasting home; and mourners go
about the streets…” Ecclesiastes 12:5

It didn’t happen all at once—it wasn’t sudden like some kind of déjà vu flashback. It was more like Spencer felt himself sliding down into it—as he strolled down the hill from Pacific Heights, down Laguna from his apartment on Sacramento across from Lafayette Park, down to Japantown.

Down Laguna—past California, Pine, Bush, Sutton and then across busy Geary Boulevard. Spencer Abendsen could smell the eucalyptus in bloom even though it was January. The old Victorian mansions once dilapidated and dreary-looking along the street had all been gentrified and remodeled into apartments with bay windows jutting into the fog.

It was a strange feeling—like he was somebody else. Somebody else looking out his eyes into the hazy fog drifting along Geary Boulevard—creeping through the City on delicate cat’s feet. It was like being himself—but slowly remembering somebody else. Who it was he didn’t know—but he had the feeling he’d soon find out. He’d have to consult the book when he got home—he said to himself. The Oracle knows all, he smiled to himself. Maybe too much.

Down in the Japantown complex, past the bowling alley where Japanese high school boys once spent their time bowling after school—that’s where Spencer had enjoyed relaxing and schmoozing with friends. The sound of bowling pins smashing against each other and the sound of bowling balls rolling down the alleys—even the gutter balls—for some reason Spencer found relaxing. Like background music as he sat there long afternoons after work reading or writing in his notebook.

He liked the way Japanese guys relaxed and enjoyed themselves—the way they got along together. A couple of them became his friends—the beefy goodlooking one who looked like a jock but could play the cello. Spencer had fallen in love with him—the young Japanese cellist Yokichi Ozaki. After making love, Yokichi would play the cello in the nude on the balcony late at night. Spencer on the sofa—smoking a Rising Sun cigarette.

Japanese guys weren’t as fucked-up as American young men—maybe it was the way things worked out after years of samurai traditional male love back in Japan. Maybe it was because Spencer could speak some Japanese and was interested in kabuki. They’d seen him a lot the past year at the bowling alley. Whatever it was—it was no big deal. Older Japanese men at the baths were the same way—the grasshopper was heavy in San Francisco.

Yokichi’s uncle Mr. Nobusuke Tagomi worked in his office in the Nippon Times Building—a rather mysterious gentleman. Very nervous and fastidious—nibbling on chocolate-covered cherry bonbons with chopsticks to avoid smudging his laptop keys.

Once he got across Geary Boulevard, Spencer strolled over to the Kinokuniya Bookstore. Another foreign edition of The Man in the High Castle had come out recently and he hadn’t seen it yet. He had a collection of them—a dozen or so from Europe, Japan and South America. He was curious about the cover and what it looked like. Supposedly a Chilean artist had done a very unique artistic cover—with a lethargic locust resting in a courtyard while a man with sunglasses looked on?

For some reason, Spencer kept thinking of Paraguay instead of Chile—what in the world did Paraguay have to do with anything? There’s been a brief blackout last weekend—supposedly a storm or something. He stopped in front of the Kinokuniya Bookstore—staring at himself in the wide picture window. All sorts of interesting books were on display—but that’s not what Spencer was looking at. He was looking at his own reflection in the mirror-smooth evening—it was going fuzzy-wuzzy on him.

He’d read about the Nebenwelt—and the mysterious book called The Grasshopper Grows Heavy. He’d read a couple of other early Ace paperback novels by Philip K. Dick—but Dick seemed to be, well, one of those old hippie amphetamine-addled hacks who died of paranoia way back when—just as his prose was about to decay into 100% psychotic drivel. A Marin County mystic—with no where else to go.

Spencer closed his eyes—feeling more and more dizzy and disoriented. He put on his glasses focused on the copy of The Man in the High Castle in the Kinokuniya display window. There was Dick’s book in the window—looking back at him. There was a man in sunglasses staring off to the right on the cover—and there sluggishly poised in a surreal almost de Chirico-esque courtyard moment was none other than a big fat grasshopper!

Spencer stared at it. But he didn’t go in and buy it. For some strange reason, he felt like he was having a panic attack—his gaze began to swim. Maybe it was an attack of vertigo—maybe he needed some sake and sushi for dinner instead of a book? Something in his stomach? he said to himself.

But he went into the bookstore anyway and bought a copy of The Man in the High Castle. He started thumbing through it right away—at a nearby sushi joint. He couldn’t read Spanish—but the more he glanced through the novel the more the hair on the back of his neck got erect. The whole story of the Nebenwelt seemed uncanny and yet familiar—the idea of an ongoing alternate history taking place made him feel the nervous frisson from another world. Why were so many readers into reading the book—from here to Timbuktu?

Spencer sensed he needed to get back to his apartment—and check out the advice of the I Ching. He needed some advice about what was going on in the book—why was he so drawn to it? Why had he collected all the various editions of it—that he could get his hands on? He wasn’t feeling himself—maybe it had something to do with The Man in the High Castle. He tossed the coins and came up with Hexagram 60: Chieh—“Limitation.”

“Water over lake: the image of limitation
Thus the superior man
Creates number and measure
And examines the nature of virtue and correct conduct”

He read down through the lines to the commentary:
“A lake is something limited. Water is inexhaustible. A lake can contain only a definite amount of the infinite quantity of water; this is its peculiarity. In human life too the individual achieves significance through discrimination and the setting of limits.”

Spencer closed the book and thought about it—contemplating what it said. He’d never particularly envisioned any novel as an alternate history—especially science fiction. Juvie sci-fi had always been more like a short period in his life back when he was an impressionable adolescent. Heinlein and those other writers were good—but reading them had been more like some sort of fairy tale fantasy he dreamed up while being a kid back then.

Anything to do with a hypothetical future or hypothetical past—that was way off in left field. It was more a matter of Meng—“Youthful Folly.” That’s all—just a somewhat imaginative way of reliving his boyhood. A minor juvie reminiscence—all those Heinlein sci-fi novels he used to read. The Winston series—just a bunch of boyhood romances. Like comic books or Saturday matinees at the Bijoux.

But taking it seriously? You’ve got to be kidding—he said to himself. He wasn’t interested in mainstream fiction—or even pulp fiction paperback Ace novels anymore. The last thing he wanted to do was spending his time adumbrating the limits of fiction— circumscribing the dystopian possibilities of some alternate history in the past or future. Or even now.

Spencer was happy just being who he was—living in San Francisco and working for the hospital across the street. He had a decent job as a file clerk in the hospital library next to his apartment. The California Pacific Medical Center was one of the largest medical centers in SF. He had a girlfriend and a couple of boyfriends too. That was all he really needed—he liked living close to Japantown. SF was cool.

But still his fascination with Dick’s book grew. And it was sort of odd as he later found out—his girlfriend’s name being Juliana Frink with her running a jewelry store on Fillmore. She and Frank, her brother, working in the mail order antique business too—specializing in fake Civil War memorabilia. They were good at it—and made a living out of it. He looked at the ring that Juliana had made for him—a topaz set in a triangle of onyx with wings wrapping down around his middle finger. He rubbed it—it made him feel better for some reason.

Just then the doorbell rang—Spencer answered it and let Yokichi come up. As Yokichi put down his cello and began slipping off his clothes, he said—“Oh, by the way, Spencer. Uncle Tagomi wants to see you tomorrow. It’s important. First thing in the morning, kido.”

Posted by pugetopolis at 2:54 PM