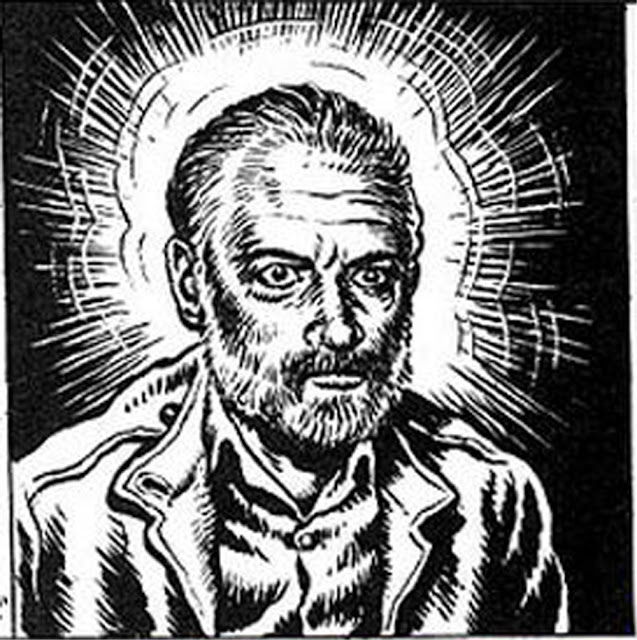 “I thought a masterful con that
works. He’s a professional entertainer
of beliefs—a con man.”
—Thomas Disch, Interview with PDK

“Yeah, well, they were both good at it.”

“Well, d-u-h-h-h. Gnostic drag anyone? How about some cool Anamnesis burlesque?”

“Yeah. Dick turned everything into illusion.”

“So did Disch. Sci-fi was their way out.”

“Or maybe in. With each novel a rabbit-hole.”

“You mean a rabbit pulled outta a magician’s hat.”

“So apparent reality for these guys seems to always end up always false & untrustworthy like Ubik?”

“Well, kinda, I suppose. Like Joe Chip & Runciter both ending up being caught up in a parallel world cold-pac nightmare. Thinking the real is real but it aint. Like was it ever real?”

“Gawd, you wanna know something really weird? Ever since I read Ubik—I’ve been fuckin dreaming Ubik dreams. You know, cold-pac nightmare things.”

“Really? So have I. I wonder what that means?”

“Well, what’s weird is that while I’m dreaming it all seems real, you know? But there’s this kipple thing going on—like Joe Chip’s going thru the storyline.”

“I know what you mean. The more lucid you get remembering these dreams—the more the Kipple Effect kicks in. It’s really pretty awful.”

“Like with me, well, it used to be I’d lose my billfold first. That was like the hint that my memory was gonna go for a crash. It used to happen slowly—you know like degenerating from one thing to another.”

“Yeah, I know. I’m more aware of it now tho. More lucid—I don’t know why. But then I start forgetting things—like where I am in the dream. And then the usual Freudian thing—ending up nude & looking around for my fuckin clothes…”

“Yeah, it sucks. Like last night, I got into this argument with this guy about stealing my memory. I blamed him for my predicament—for losing everything in the dream. It went on & on…”

“Well, dude—you know what that means.”

“Yeah, let’s face it. We’re both like Joe Chip. We’re in cold-pac, baby. This is some kind of goddamned Beloved Brethren Mortuary we're in—we’re dreaming it now, in fact. Can you dig it?”

“You’re fuckin A, man. Especially these mind-fuck sci-fi novels by Dick. Paranoia is contagious, you know? Like yuk!”

“Well, in these Ubik dreams I’ve been having—like I’m more lucid that I ever have been. More lucid & aware of the crummy situation I’ve dreamed myself into. It's a creeper. It gets deeper & deeper.”

“Yeah, me too. But it seems so real, man. So real inside these fuckin Ubik dreams—you know what I mean? But then when I wake up I have to laugh at myself. The mind-fuck I've been struggling with, well, it's just disappears. Thank gawd. Man oh man...”

“Well, I dunno. After reading Ubik a couple of times, like I downloaded Exegesis on my Kindle. Fuck me! Talk about a fuckin labyrinth. A ratty rabbit-hole. It was like I was into this serial-dream mode thing. It’s this recurring thing—getting more & more aware of the Kipple Effect, don’t you think?”

“I don’t think—I know what you're talking about. But it aint just losing your billfold or clothes anymore. The plots are getting more complex and paranoid. I keep losing track of myself. Know what I mean?”

“Hmmm. Yeah, we’re both turning into P. K. Dickheads that's for sure, man. Wait until you read A Scanner Darkly. That's when you're in deep shit.”

“Fuck that. I saw the movie—talk about weird. I don’t wanna end up like Keanu Reeves or Downey.”

“Well, it’s the same with all of PDK’s novels—everything gets slowly transgressive & worse & worse. I’ve read most of his novels. The Man in the High Castle still gives me bad dreams—the same with that short story “Faith of Our Fathers.”

“It seems like Dick is living in more than one world all the time. He's got all these layers & simultaneous realities ending up getting stacked on top of each another. Chilling the layers together—like Rome & now going on at the same time?”

“Yeah. Somewhere Dick says he doesn’t write beautifully—he just reports about conditions to get to those outside the cold-pac.”

“But that, of course, is surely just a fiction—that we’re all dead just thinking they’re outta cold-pac. What a mind-fuck. What if we're all dead anyway?”

“Well, you see, Dick ended up being a real deadhead. He knew he was just faking it—pretending he was this smooth guy outside cold-pac totally informed & all that. Like Abendsen in The Man in the High Castle. The Grasshopper is Heavy thing. Like he was always yearning for some kind of real religious out-of-this-world revelation—instead of faking it all the time.”

“Like A Maze of Death and Galactic Pot-Healer? He must have felt like he'd been denied some kind of kosher religious experience—and he’d reached the end-game. He was scrapping the bottom of the barrel. He couldn’t fake it anymore—that’s when it happened.”

Posted by pugetopolis at 2:37 AM