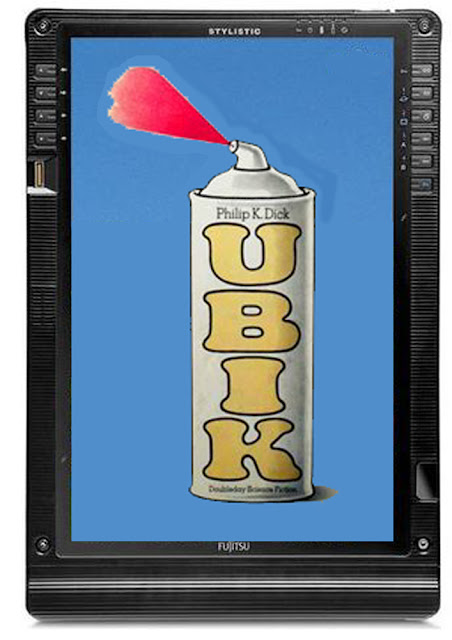 “So the question is: who wrote Ubik?”

“Yeah, I know that. But why does he say in Exegesis that Ubik wrote Ubik?”

“Well, I dunno. Are you saying somebody else wrote Ubik?”

“Instant Ubik ahs all the fresh flavor
of just-brewed drip coffee. Your
husband will say. Christ, Sally, I
used to think your coffee was only
so-so. But now, wow! Safe when
taken as directed”
—Philip K. Dick, Ubik

“Well, Dick seems to imply he wrote it—but more like in a non-linear, pastiche “Kipple” style, you know what I mean?”

“Yeah, but I’ve felt the “Kipple” effect myself—like when I’m dreaming. Like things are constantly decaying and falling apart—like my memory and trying to remember things. “Kipple” is kind of like being in a state of “constantly forgetting,” you know what I mean? Like my memory is being erased all the time and it’s hard to remember or follow through on things like when I’m awake.”

“Well, that’s probably because being awake is like thinking linear from point A to point B, you know, like narratively, living a storyline with a beginning, middle and end. While dreaming is more like “Kipple”—a sort of stream of consciousness that dominates and hogs up your attention all the time.”

“The best way to ask for beer is to
sing out Ubik. Made from select
hops, choice water, slow-aged for
perfect flavor. Ubik is the nation’s
number-one choice in beer. Mad
only in Cleveland.”
—Philip K. Dick, Ubik

“Yeah, I suppose it’s a left brain-right brain thing. We seem to be in the left-brain, they say, most of the time in this culture of ours. Dick seems to be saying that writing is more right brain—more like dreaming up these kitschy, campy, weird, disconnected scenes like in Ubik or some of his other novels.”

“Anyway, if you’re dreaming or stoned and writing like Dick, for example, and you’re in this supposed right brain mode, then it’s a no-brainer to maybe see the right brain linear mode doing the “Kipple Effect.” You know, like what is right brain or dream memory like? The more you right brain—the more you write Kipple crap.”

I dunno. I suppose. That’s what Dick seems to be proposing though. Joe Chip and all the rest of the characters in “cold-pac”—kept in a state of “half-life.” It’s natural for Kipple stuff to go on while you’re in a state of this cryonic suspension—giving the deceased person limited consciousness and communication abilities. Half-life doesn’t last forever.”

“But Joe Chip and the others are all doing the Kipple thing much too fast—faster than they’re supposed to. Right?”

“Right. They’re paid telepaths hired by corporations that want to keep their trade secrets and be protected from copyright infringement stuff. There’s been this explosion on the moon and they’re all deceased. Or semi-deceased in “cold-pac”—so much for all these anti-telepaths.”

“Wild new Ubik salad dressing, not
Italian, not french, but an entirely
New and different taste treat that’s
Waking up the world. Wake up to
Ubik and be wild! Safe when taken
As directed.”
—Philip K. Dick, Ubik

“Anyway, Dick’s got something in common with these “cold-pac” teeps, parakineticists & precogs.”

“His brain is deteriorating too. It takes a Kipple to recognize a Kipple.”

“Yeah, I know what you mean. Like Exegesis. That tome.”

“But Dick’s clever. He keeps the storyline going. He invents this deus ex machina thing to neutralize Kipple. It’s called Ubik in a spray can.”

“Yeah, it’s like the only novel I know where each chapter starts with a Ubik advertisement.”

“Well, that’s how the novel works. The aerosol spray in a can of Ubik somehow halts the speeded-up Kipple effect that his colleagues have undergone. In fact, it’s like somebody or something has not just decayed or done an entropy thing on them. It’s like they were all eaten up or sucked dry before their time.”

“Joe Chip finds out in this Beloved Brethren Moratorium Mortuary that one of the “cold-pac” semi-deceased persons is preying on both him and his precog friends.”

“Yeah, that’s a cool ending I suppose to the novel. Joe Chip and the Jory kid having this weird confrontation thing—almost like a Kipple Movie within a Movie…”

“This Jory kid was no innocent kid though…”