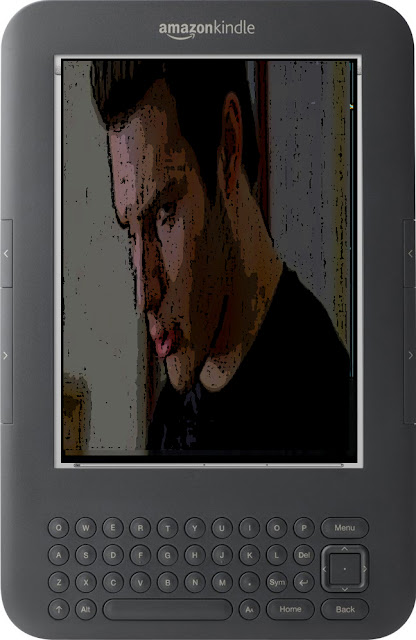 “I AM Ubik. Before the universe
was, I am. I made the suns. I made
the worlds. I created the lives and
the places they inhabit; I move
them here, I put them there. They
go as I say, they do as I tell them.
I am the word and my name is
Never spoken, the name which no
One knows. I am called Ubik, but
That is not my name. I am. I shall
Always be.”—Philip K. Dick, Ubik

I sprayed the kid with the can of Ubik.

The shimmering, palpitating vapor, filled with particles of metallic light that danced nimbly, formed at once around him. He disappeared, concealed by a nimbus of radiant, energetic excitement.

The vapor slowly condensed—puddles of it glistening on the carpet and down the wall. The wall drizzled with streaks rotting the wallpaper.

Then puddles of it gathered on the floor, saturating the worn out and dingy carpet. Ubik was doing its thing—revealing what had been disguised from me.

The cloud evaporated—and then there was this adolescent boy. Mawkishly slender—with an irregular set of bedroom eyes beneath some heavy eyebrows.

On his elongated face I saw a smile—but it was misshapen with a thwarted crease that became now almost a jeering leer.

He seemed only half-formed—like most teenagers. But his face had this convulsing, throbbing, snake-like motion to it. Like there was something beneath it—like his face was just a mask.

He was malformed—a deformity thing. It wasn’t just male hormones twisting through him—his face didn’t harmonize together with everything else. His chin was too sharp—with a deep chisel mark in it. A cleft obviously penetrating deep into the bone—as if he’d been fractured or split apart at birth.

He jeered at everything—especially me. His fingers writhed, a twitch in his throat making him stammer. He was literally shrinking in his own flesh—undulating with aversion by the grossness of his own body.

Hardly managing to conceal it—regarding me as something to devour and eat and consume. Like he’d done to all the other telepaths and precogs. Like he was going to do to me—I was the last one to go.

I raised the can of Ubik and sprayed him again. He disappeared—but that was easy for him. I was inside his Kipple dream—I knew that now. I wasn’t in the mortuary coffin either—supposedly in “cold-pac” like the others.

The others had been sucked dry—what life force they had was long gone now. Runciter’s corpse was in another room with his wife—the Jory creature had left them there. They were off in some Kipple zone for now—slowly regressing like you’re supposed to.

Runciter, my boss, was still regressing—like his wife. Or was he? Was I the one in “cold-pac”—or was he? Was Runciter dead? While me and the others were still alive?

When Runciter finds the coin—with my face on it. That seems to me that—he was in the phantasmogorical world of semi-deceased “cold-pac” just like me.

What did Runciter mean when he said that—he suspected that this was "just the beginning” of something? A Jory-like alt.welt? An alternate double-world—like The Man in the High Castle?

Actually, I wasn’t sure of anything in the world anymore—not that I could call “reality.” It’s possible that we were all dead and in “cold-pac”—or was it that the Kipple half-life world had taken over the full-life world?

On the other hand, was it possible that we were all alive and dreaming? Even the Jory creature—who I thought was the villain of this whole noir scenario?