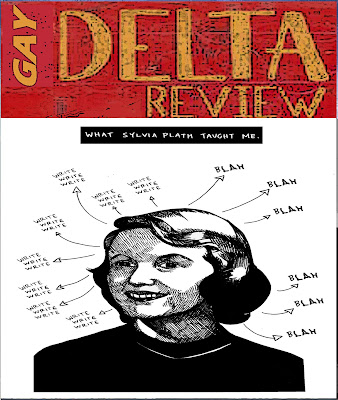 Somewhere between “The New American Poetry Anthology” with its dreary mainstream verse of the 50s and 60s on one hand—and on the other hand, Silliman’s “In The Tree” with its gang of lewd, louche Language Poets—it seems that I floundered & sank like the Titanic down into the kitschy depths of The Bermuda Triangle of Literary Boredom and Ennui.

Yawn, Ho-hum, fix me another martini, will you? I suppose I’ve always been rather skeptical about the Bitch Goddess Sylvia Plath—with her ongoing tiresome “Ariel-Big Bad Daddy” Cult of Suicide dontchaknow. Along with all those other Tacky Harbingers of Doom: Anne Sexton, Robert Lowell & John Berryman.

I suppose I’m like so many of us aging spoiled Fifties Eisenhower Era Elvis Presley Drive-In Baby Boomers—our generation that was caught up in Post-Depression Postwar Postmodern Prosperity & now the Great Post-American Dream.

Little did we Boomers know that evil Slithering Slackers and Scheming Prototypical Ponzi Artists were on the horizon just waiting for us. And there was Dallas and The Viet Nam War—getting ready to wipe the know-it-all Smirks off our pretty little pusses & to rub our smug faces in the Slimy Shit of the 21st century Zeitgeist.

I was already somewhat prepared for Dallas and Viet Nam—since the Lost Camelot nostalgia days of Huey P. Long’s demise getting assassinated in the State Capitol Building had already infused the spirit of Louisiana during the Thirties with that same approaching denouement melancholy coming out of the Sixties toward us.

And the Decadent Deep South had already, of course, long suffered the post tragic Civil War days of “Gone With the Wind” and the sadness of the Burning of Atlanta—so that I was already immured with a sense of Pusillanimous decay and rotting Antebellum Pulchritude.

“Confessionalism” had already played its tragic role in my so-called Delta Bourbon bildungsroman—with its mildewing hopes & decaying feelings oozing through my heart already filled with such niggardly gifts of happiness & joy.

Sylvia Plath’s “Confessionalism” made me Yawn—and Language writing wasn’t that much better. The feminist reception in the 60s and 70s had flickered briefly—but now over the years & with Adrienne Rich’s death, well, the Dyke Dynasty of Plathian Literary Protest seems to have had its day.

The Ghost of Ariel seems to have flown its coop—and the crude Cult of Big Bad Daddy seems to be pretty much dead. Dead & gone with the Demise of that Mytholmroyd Hoodlum & Yorkshire Killer—Ted “Big Bad Daddy” Hughes.

“Big Daddy” seems to have now gone out of style—with its final Swan Song goodbye of “Birthday Letters,” the pomp & circumstance of The Order of Merit & the Poet Laureateship finally shifting away from Pompous Patriarchal Pricks.

But what about the Bitch Goddess herself? Has Sylvia moved beyond Language writing now—as well as revisionist contextual and gendered readings of her Work?

Can we now see Ariel’s bitchy negativity—as something relevant & integral to the way we act & think in this new Late Capitalism Postmodern Paradigm? Has SYLVIA Come in from the Cold yet? Is Big Bad DADDY really dead?

Posted by pugetopolis at 7:46 PM