The “Nixon Triptych” of Sylvia Plath 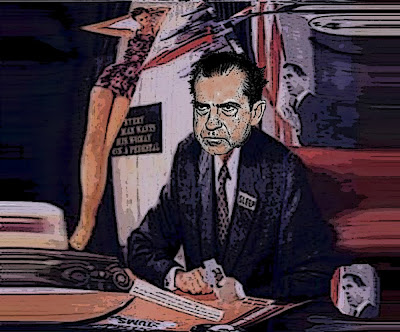 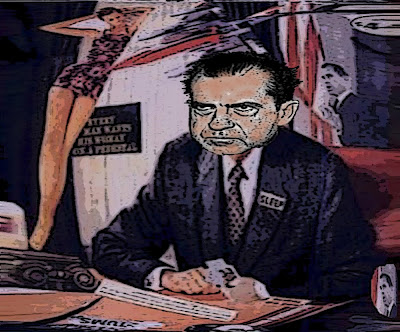 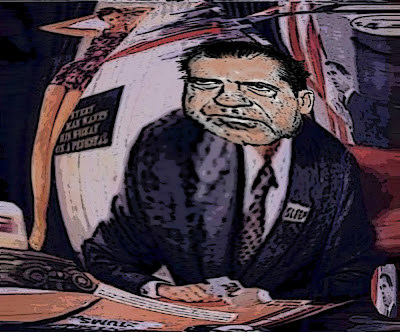 “What remains is to fully bring Plath’s poetics into the framework of the same cultural logics that produced The New American Poets—think of Ginsberg’s A Supermarket in California, for instance—a revision that, come to think of it, gets us past the avant-garde/mainstream, or post-avant/School of Quietude, faultline that has troubled our thinking on poetry for so long."—Barret Watten, “Sylvia Plath’s Collage”
http://barrettwatten.net/texts/entry-06-sylvia-plaths-50s-collage/2010/01/

After spending quite some time doing research down in the depths of Emory University's Manuscript, Archives and Rare Book Library (MARBL)—I made a startling discovery.

I came across a very troubling & controversial political collage of Sylvia Plath’s in the Hughes Archives—locked away in the secret vaults & crypts beneath the campus that supposedly weren’t supposed to be released for another 1000 years.

I’d rather surreptitiously bribed the lovely Archive Librarian (a cute Southern Belle Redhead) into getting down there in the crypt & then I’d managed to give her a “mickey” in her coffee.

Then I leisurely proceeded to greedily ogle to my heart’s content the special Sylvia Plath Artwork Archives hithertofore unseen by curious human eyes. The Plath Estate had been so jealously secretive about so many things—and I even stumbled onto the infamous W. B. Yeats’ Fitzroy Road “oven” stored away down there!!! It still reeked with the stench of gas and death…

Anyway, after some rummaging around—I came across a motherlode of Sylvia Plath’s political artwork and—but much more radical than the Wellesley ones and more like the seminal “Eisenhower” collage that Jacqueline Rose discusses in “The Haunting of Sylvia Plath.”

Except these newly discovered political collages were about the subsequent Nixon Sixties & early Seventies—or at least portrayals of the way Plath saw the political zeitgeist developing at the time in ominous directions.

The “Nixon Triptych” consisted of three collages which give the viewer some serious insights into the cultural logic of the Sixties & early Seventies—when the Viet Nam War was tearing apart the country and killing so many of the Baby Boomers in the ratty jungles of Southeast Asia. It clarified Plath’s formal intervention at the same time-in terms of her post-Arielesque poetics.

These 3 Nixon political collages demonstrate the kind of surrealist collage mulitiauthorship that Plath had constructed for herself or perhaps would have developed further if she had survived beyond her 1963 denouement. A different Sylvia Plath aesthetics & poetics than her “Arielesque & Big Bad Daddy” Fifties & early Sixties oeuvre.

This “Nixon Triptych” reversionary collage was in many ways similar to her earlier “Eisenhower” collage—but there was a nightmarish hybrid lyric difference to it. Plath was beginning to develop beyond feminist & confessional authorship with her poetry becoming more radicalized politically by her ongoing artwork.

This image-development is described in terms of her earlier collage-poetry collaborations noted in Kathleen Connors’ “Eye Rhymes: Sylvia Plath's Art of the Visual.”

Plath continues to distance and undermine the Self in its Arielesque expansiveness and Big Bad Daddy contradictions—first in terms of contemporary art satire & then articulated more politically in her post-Ariel & post-Daddy poetics.

As the Viet Nam War continued & intensified—Plath’s coupling of artwork & politics was leading her into deeper states of fantasy in her work. Her artwork at this time was anything but expressive of feminist anger and confession of intimate secrets.

Rather, a more public dimension of Plath’s Arielesque transformation of the self was emerging. Her maturing “parasurrealistic imagination” was giving her insights into where the Nixon Triptych was going. Both in content and in the future form of the Vietnam Nightmare—looking down the line to future American Asian Expeditions of conquest for oil & other natural resources.

This Nixon Triptych is similar & yet somewhat different than the earlier Eisenhower collage. At the center is the growling, sneering surrealistic menace of Richard Nixon’s gangster face—glowering at the viewer as he sits there at his executive desk.

As with Eisenhower, Plath has inserted a run of Las Vegas playing cards—on the desk lie some Tums for his upset stomach. The camera focuses in on an elongated model in a swimsuit—oozing down & posing over Nixon’s right shoulder.

Except the model in the Nixon Triptych has been surrealized & turned into a stealthy simulacrum of a weapon systems—similar to the bomber jet plane hovering over Nixon’s balding head. The Cold War seems to have entered a new phase—which it in fact it does as the technology of death improves logarithmically toward on ongoing Götterdämmerung Apocalypse.

Richard Nixon wets his lips for the camera—he’s much more in love with himself than Eisenhower. So much so that Nixon has 2 mini-portraits of his ugly puss in the collage. One on his desk & the other hovering over his chair like a guardian angel beneath the American flag.

Like all artistic collages, this “Nixon Triptych” collage offers itself as a set of fragments. But also it’s not merely a picture puzzle or rebus—instead it’s more modeled after the Freudian paradigm of dream image transformation with Nixon’s face becoming increasingly bloated, bug-eyed and terribly menacing.

Plath uses this language of dreams very much like she later would use the L=A=N=G=U=A=G=E mode of her phase of parasurrealistic poetry. In fact, Plath’s poetry gradually incorporates more & more the grueling grotesque butchery of Francis Bacon’s bloody paintings to critique the ensuing Asian & Middle Eastern conflicts—such as Bacon’s “Three Studies for a Crucifixion” (1962) and “Head Surrounded by Sides of Beef.”

The “Nixon Triptych” shows Plath immersed in war, consumerism, photography, and politics at the very moment she was beginning to move beyond her “Ariel” & “Daddy” poems. The “Nixon Triptych” shows Plath incorporating the multiple horror stories of the Viet Nam War & Watergate that would come to symbolize this very Nixon-esque culture—against which these same & new poems were moving toward.

Posted by pugetopolis at 9:38 AM